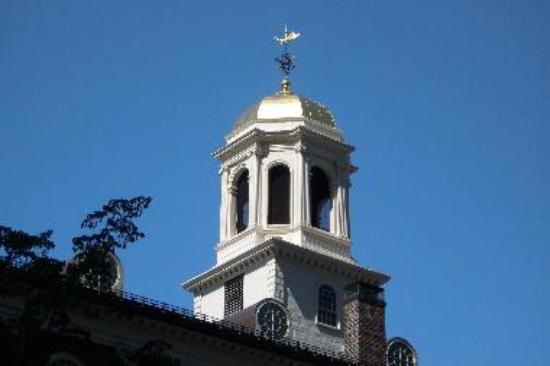 For any first-time visitor to Boston, there are so many things you'll want to do and see. When you are visiting in the spring, summer or fall, be sure to plan a historic walking tour of Boston known as the Freedom Trail. Boston is a great walking city. Its compact downtown area makes it the perfect place to see everything and enjoy the ambiance. Several companies provide Freedom Trail Tours. Typically, the Freedom Trail is divided into two pieces to make it manageable: Downtown and the North End/Charlestown, with Faneuil Hall as the "middle" place. Guided walking tours of each piece take somewhere around 90 minutes. Boston CityWalks offers a daily "Whole City" Walk that covers the Downtown Freedom Trail, Beacon Hill and Back Bay in around two hours that includes history and historic architecture.  Free Tours by Foot offers tours of the Freedom Trail and beyond. Their guides work just for tips, so you can decide what you would like to pay. There are also tours given by the National Park Service as well as the Freedom Trail Foundation.

You'll have to plan ahead if you want a fun tour of the city by land and water, known as the Duck Tours. This one is great for kids and adults alike -- educational and entertaining. They are very popular so call ahead to book your tickets. Another option to get a narrated spin through town are the many trolley tours. Old Town Trolley and   The Beantown Trolley are two of the most popular and, as with pretty much any of the trolley tours, has the added benefit of letting you get on and off along the route.

There are many fantastic museums for both adults and kids. The Museum of Fine Art, The Museum of Science (take the kids to this one!!), the New England Aquarium, and many more. Save these in case you get a rainy day while you're visiting. If going to the Aquarium, especially on rainy days and weekends, get there early. The ramp which forms the primary way of visiting the aquarium gets unpleasantly crowded. The Children's Museum is a big hit with kids with the younger child.

Boston is a sports town that has you covered through the seasons. Take in a Bruins hockey game  or a Celtics basketball game at the TD Garden by Norht Station. Hop on the Patriot's train to get to Gillette Stadium outside the city in Foxborough. During the baseball season, you're in Red Sox Nation! Head over to Kenmore Square to catch the game at historic Fenway Park. If you can't get tickets, stop by any of the local watering holes for a drink and cheer along. You won't be alone. If you are a Yankees fan, probably best to keep it to yourself.

Go for a walk through Faneuil Hall Marketplace for some buzzing activity and people-watching. There will be street performers and plenty of food options if you're hungry. Countless bars will whet your appetite if you head over later in the day. Just a bit further along is the city's North End, with the best Italian food and some of the best seafood in the city. .

For less touristy fare than Faneuil Hall and the city's top shopping, head for Newbury Street. Summer or winter, this street will delight shoppers and foodies alike with its boutiques and wide variety of restaurants. It starts right at the  Public Garden and proceeds for the length of the Back Bay neighborhood.

If antiques are more your thing, Charles Street has some of the best antique stores in Boston as well as a number of fun restaurants. Charles Street is long enough to keep you occupied, but no more than a reasonable stroll. But leave the kids -- it is definitely more of a grown-up scene. Start with a coffee at Starbucks at the Common end and finish with a drink in The Clink  (Liberty Hotel) at the other end.

Charlestown is just across the Charles River from the North End. It does not get a ton of tourists, although it has a couple of worthwhile sights in the Charlestown Navy Yard (home to the U.S.S. Constitution, aka "Old Ironsides") and Bunker Hill. Both are worth a visit for history buffs and the area around Bunker Hill has a number of quaint streets.

Cambridge is synonymous for many with Harvard University, but that's only a small corner of this expansive city across the Charles River from Boston. Some of the funkier restaurants and bars cluster around the various "squares" in Cambridge. The Squares are really overgrown intersections, but are handy reference points and typically have a Red line T stop, making them easy to reach from Boston if you want to sample one of the many Brazilian restaurants or authentic Boston Irish pubs. Cambridge also features MIT, and both MIT and Harvard have museums worth visiting. Harvard Square is just 20 minutes by T from downtown Boston and its restaurants make a great launching point to see the University, explore bookstores, or just to buy a sweatshirt at the Coop. It used to boast a more eclectic array of eating, drinking, and shopping but in the past decade there have been abit too many banks and the same chains that can be found elsewhere. A few of the old denizens still remain: for example  Charlies Kitchen on Eliot Street makes a mean burger and has its own unique vibe.

If you are looking for kid-friendly dining during your visit, Bertucci's is a safe bet with a number of locations in and around Boston. The pizza is pretty good and they arm each kid with coloring books and some dough to play with. Legal Seafoods is surprisingly kid-friendly, although many find it a bit expensive of an option for the whole family. U.S. visitors will find plenty of familiar options if neither of the former are conveniently located. And yes, there are Dunkin' Donuts pretty much everywhere you turn.

If you are planning on taking in the sights, you might want to consider n All-Inclusive Go Boston Card or a Build Your Own Pass. The former is good if you intend to spend a few days of intensive sightseeing as it gets you into pretty much everything for a single, fixed price. The Build Your Own Pass allows you to choose any attractions from the list offered and add them to your pass with an automatic applied discount of 15-25% as long as you choose 2 or more attractions. -- You have 30 days to use it -- so a good option if sightseeing is only part of your reason for visiting Boston. Both options also have skip the line privileges at some of the busier sites. CItyPASS is another attractions savings option http://www.citypass.com/attraction/hm... for Boston lets you see the top five Boston attractions over a 9-day period.

Don't stress about driving. Boston is fairly compact, so you can walk to many of the things you want to do or just  take the T. It's affordable and easy to get around the city! Note that the last train runs at 12:45 A.M. Cabs can be a bit expensive (for estimates try  TaxiFareFinder - Boston) for getting around the city so use sparingly if you're watching your budget. This applies for getting into town from the airport as well.

There are a couple of relatively easy options: the Silver Line (it is actually a bus, but ends up on its own underground route, so it goes quickly) and the airport shuttle to the Airport subway station on the Blue Line. The Silver Line will get you to South Station -- the main (and modern) Boston transportation hub, right next to downtown, and provides access to subway lines as well as commuter rail and Amtrak to points farther afield. The airport shuttle bus is frequent and has you there in 5 minutes. The downside is getting your luggage on and off the free bus and then transferring to the subway. But it's worth it if you want to save money and it puts you right on the Blue Line which will take you into central Boston after just a couple of stops. Boston recently started a bike rental program, called the Hubway, for an exciting way to get around the city cheaply.

Regardless of what you do, you will enjoy your stay in historic and vibrant Boston!