San Francisco is served by two major airports as well as several bus and train stations.

San Francisco International Airport ( SFO) is about 14 miles south of San Francisco and serves as the region's primary airport. It offers a wide range of domestic and international flights and it's a convenient choice for anyone staying right in the city.

Oakland International Airport ( OAK) is located approximately 19 miles southeast of San Francisco and serves as the region's secondary airport. It offers more discount flights and is a major hub for Southwest Airlines.

Both airports have information booths to assist travelers when they arrive. 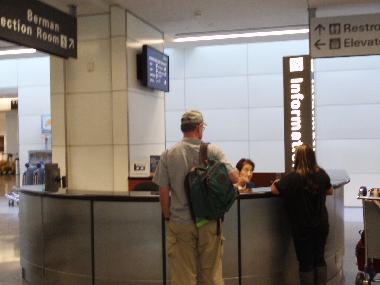 If you're arriving in San Francisco from another U.S, city, consider taking southwest airlines into OAK (or, less frequently, into SFO).  The 'no frills' airline has hourly flights from lots of U.S. cities and they are unique in that they do not charge for the 2 pieces of checked luggage.  You are also permitted to carry on 2 items at no cost.  Southwest has mostly short flights so if you're heading to San Francisco from the east coast, for example, it is likely that the flight will not be non-stop. Tickets for southwest flights can only be purchased on the southwest.com website.

Other discount carriers that fly into San Francisco include Virgin America and Jet Blue.  Be sure to check the major airlines as well like United and Delta because, sometimes, their fares are less expensive than the discounters.

Amtrak trains do not directly serve San Francisco, but they do provide timed bus transfers from nearby stations in Emeryville and Oakland to several bus stops in San Francisco. The primary bus stop is at the Transbay Terminal at Folsom and Main streets (recently moved from the Ferry Building), but most tourists will be interested in the more convenient stops at the San Francisco Shopping Center (near Union Square) and Fisherman Wharf (near Pier 39). The centrally located Financial District stop is best for travelers who need to take a taxi or public transit to reach their final destinations.

Additional Amtrak buses operate directly from the Transbay Terminal stop to points along the Central Coast, terminating either in San Luis Obispo or Santa Barbara, where they connect to Amtrak trains serving Southern California.

Caltrain trains run along the Peninsula and in Silicon Valley. The San Francisco station is at 4th and King streets, two blocks west of AT&T Park (where the Giants play baseball). Local trains run hourly between SF and San Jose on a daily basis; additional limited-stop and "Baby Bullet" trains operate during weekday commute hours and on a limited basis on weekend days.

Greyhound and Bolt Bus buses arrive and depart at the Transbay Terminal, located at Folsom and Main streets, about two blocks southeast of Market Street and the Embarcadero Muni/BART Station. This bus station also serves as the terminal for Amtrak and several public transit bus lines. Megabus buses stop at the Caltrain station at 4th and King streets.

Getting Downtown From Airports

Bay Area Rapid Transit ( BART) trains board at the International Terminal and make several stops throughout the City. To reach the BART station from Terminals 1, 2, and 3, catch the free AirTrain to the station. A ride from SFO to the major stops in San Francisco (Civic Center, Powell, Montgomery, and Embarcadero) costs $8.65 per person (no round-trip discounts) and takes about 30 minutes (excluding AirTrain connection), which is often faster than driving during heavy traffic. Seniors (65 and over) and children (between 5-12) can purchase  discounted tickets in person (cash or credit/debit cards) at the airport information booth located in all terminals.

SamTrans provides regular bus service from several stops on the arrivals (lower) level of SFO to San Francisco. Routes 292 and 397 make local stops en route, and luggage is permitted. Route KX provides express service, but luggage is not permitted. The overwhelming majority of travelers prefer to use BART rather than SamTrans to travel to/from SFO because of the long travel times associated with Routes 292 and 397 and the luggage restrictions in place on Route KX.

BART trains operate from the Coliseum Station and serve the same San Francisco stations as the trains coming from SFO. To reach the Coliseum BART Station from the airport, travelers must first take BART's automated people mover, which picks up outside the terminal (across the street and then upstairs). The people mover leaves every 5 minutes from 8am to 8pm (every 10-20 minutes at other times). Once you arrive at the Coliseum station, buy your ticket there (they are not available at the OAK station) and then catch a Daly City-bound train to reach San Francisco.

A ride from OAK to the major stops in San Francisco costs $10.05 per person (no round-trip discounts) and takes about 35 minutes, which can be significantly faster than driving during heavy traffic because of congestion along I-880 and the Bay Bridge. For more information on how to use the new people mover serving OAK, check out this handy guide.

Taxis provide door-to-door service to any point within San Francisco and surrounding communities. They offer good value for groups of up to 5 since fares are charged by vehicle rather than by passenger. In addition to traditional sedans, SUV and minivan taxis are also available for larger groups or groups with more luggage than normal. Note: You may have to provide your own car seats if you have children 7 years or younger in your party.

Taxi fares are dependent upon travel time and distance. Typical fares from SFO into the City, excluding tip and any time spent waiting in traffic, are on the order of:

Based on the September 1, 2011 rate of $3.50 for the initial "flag drop", $0.55/fifth of mile or minute of wait time, and $2 SFO surcharge. Typical fares from OAK to Union Square can be $65. The Bay Bridge is prone to congestion, so taxi fares from OAK can escalate rapidly.

Whether to take a taxi or BART between SFO and Union Square (or Nob Hill) hotels depends on the number of people traveling and other factors. If the visitor's luggage is easy to manage and the visitor doesn't mind walking between a BART station and his/her nearby hotel, BART is the cheaper way to go. If the hotel is on Nob Hill or is a longer walk from the nearest BART station, or if the visitor has heavy bags, it may make sense to get off at the Embarcadero station and take a taxi. The total cost of BART plus a taxi for 4 people may be in the $40-$50 range compared to $45-65 for 4 people traveling directly from SFO by taxi.

Transportation network companies ( Uber and Lyft) are permitted to operate at SFO and OAK. In either case, it is easy to request a ride via smartphone once you arrive. Availability is very good at both airports and throughout the Bay Area. It is best to "shop around" to pick the cheapest and quickest option. TNC's are almost always signficantly cheaper than taxi and shuttle services, but double check surge pricing before confirming your ride. Also, note that some Uber services charge a flat rate for service to/from both airports.

If you are traveling by yourself (or with one other person), you can use Uber Pool or Lyft Line for a discounted rate. By choosing this option, you may be matched with another rider along your route. This option allows you to split the charge with the other rider in your uber/lyft.

Shuttle companies provide door-to-door service to San Francisco for solo travelers and groups of up to 7. Shuttles charge a flat rate per person for "shared van" services that make multiple stops to pick up and drop off passengers, and a flat rate per van for "private van" services which make only one requested stop. Several shuttle companies serve SFO (see list of operators) and Oakland Airport (see list of operators).

From SFO, shuttles can be found at the center islands of the departures (upper) level; fares are typically $17 per person for a shared van or $75 per van for a private van.

From OAK, shuttles should be reserved ahead of time to avoid long waits. Shared vans have fallen out of favor at OAK, but private vans are still easy to book. Fares are typically $95 per van for a private van, but lower cost minivans and sedans are available.

Airporters are privately operated bus services that connect SFO and OAK with outlying communities. Unlike shuttles companies, airporters do not provide door-to-door service and they often have fixed schedules. At SFO, airporters board on the center islands of the arrivals (lower) level; at Oakland Airport they board on the 4th curb (exit the terminal and cross the street).

Because rental cars are expensive (don't forget parking fees!) and public transit, taxi, and shuttle services are readily available in the Bay Area, renting a car simply to travel to/from SFO or OAK is not recommended. It is easy to navigate San Francisco on public transit or by foot, so many visitors choose to rent cars only on the days they decide to venture out of town. There are several rental offices within SF city limits. Visitors who choose to rent a car at the airport should make advance reservations from one of the many rental companies serving  SFO or  OAK. SFO passengers can take the AirTrain's free Blue Line to the SFO Car Rental Center, and OAK passengers can take the free shuttle bus from the 4th curb outside the terminal to the OAK Car Rental Center.