Getting a cheap, legit taxi at the airport is not difficult, but it does require a little knowledge and attention if you want to avoid the ubiquitous scams that the Western farang fall prey to every day upon their arrival into Bangkok. Weary-eyed, exhausted travellers who are not familiar with the local customs are the ideal targets for unscrupulous "touts" to take advantage of. These "touts" are well-aware of how inexpensive Thailand can be compared to most countries and know that tourists are an easy mark for convincing that the price they're paying is a bargain. Unless you're in a metered taxi, you will be paying more than necessary, and even if that's not a major issue, you should seek out a metered taxi for your own safety and peace of mind. You can pre book your taxi online for an easy hassle-free journey: AirportCollections, Bangkok-Airport transfer, Bangkok Taxi, Bangkok Transfers 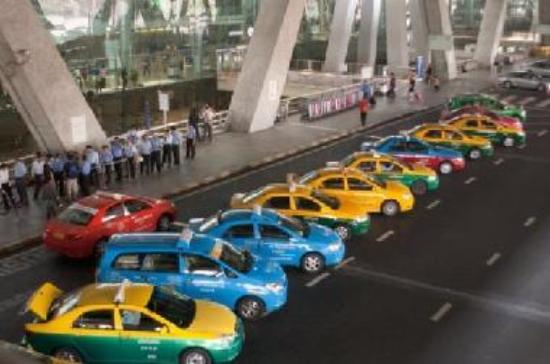 When you first arrive in Bangkok and exit customs, you may be approached by men and women right and left asking if you need a taxi, and while you may feel like you're being impolite by saying "no" to them over and over, just know that these people are not looking to help you but more likely to help themselves. Recently these touts have been "cracked down on" by the Airport authority, and moved away from the Arrivals area - it's unknown how long this "crack down" will last. Just remember you don't need ANYONE to help you get a taxi, anyone trying to help is best ignored - politely.

Taxis in Bangkok are cheap, they mostly run on natural gas. They are modern cars like Toyota Coronas (or similar).  The taxis run on meters and you should always ask for them to turn on the meter.  They charge only in Thai Baht  (local currency) and you will find them easy to use and a better (cooler-air conditioned) mode of transport compared to a tuk tuk.  Unlike tuk tuks, where you must always negotiate the fare BEFORE you get in.

Be aware that you will be responsible for paying any tolls in addition to the meter fare, and it's between you and the driver to decide if you'll just pay at the end or if the driver wants you to pay at each toll booth. (Two tolls between the Airport and the City total 75฿). The amount will be printed on a little ticket that the driver collects at each stop and the price at the toll booth is clearly shown on an illuminated board. There is also a 50฿ Airport tax which every taxi from the arrivals area must pay ( i.e. You must add it to the final meter reading plus any tolls if you didn't pay them as you go - see below). 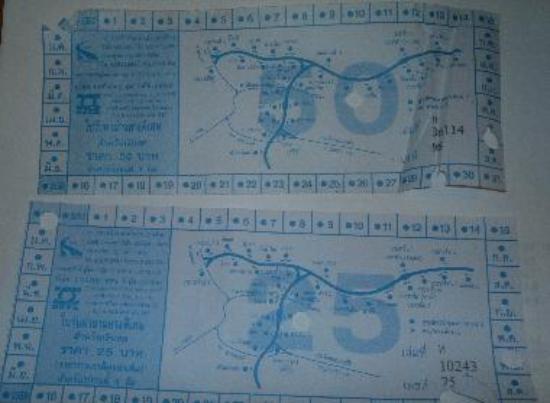 Try to be prepared by having some small bills to pay the fare. The toll booths are a great place to break down larger notes if you failed to take care of it at the airport. When exchanging cash at the Airport be sure to ask for some smaller denominations (get yourself some THB100's 50's and 20's). It's also useful to have small bills for little tips at the hotel ect. The taxi drivers do not expect to be tipped, but if it's been a safe drive it's quite ok to round up the fare e.g. 382฿ total fare could be rounded up to 400฿ at the end of the journey.

Incidentally, you can charter a taxi all day to see the sights of Bangkok and have your own private driver for approximately 1000฿ -1500฿.  Have fun and enjoy the wonderful and inexpensive taxis of Bangkok.

Taxi around the city

Taxi meter fares from point to point in Bangkok city will usually come in well under 100฿ ( US$3). It is always desirable to flag down a moving taxi rather than approaching one that is parked, especially outside tourist hot spots and hotels. Why? Because these drivers will try to negotiate a flat fare to your destination, which, apart from being illegal, means you'll pay too much.

You can tell which moving taxis are available for hire by the small red illuminated sign in the passenger side windscreen ( see below). 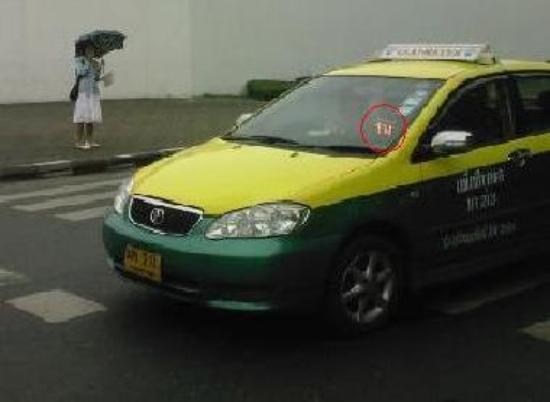 Simply stand by the side of the road (preferably with traffic heading in the direction you want to go) and when you see a vacant taxi, wave him down with a gentle "palm facing down" motion... a bit like patting a dog's head. Lean into the taxi and state your destination. If the driver nods, get in, watch that the meter is started at 35฿ ( see below). 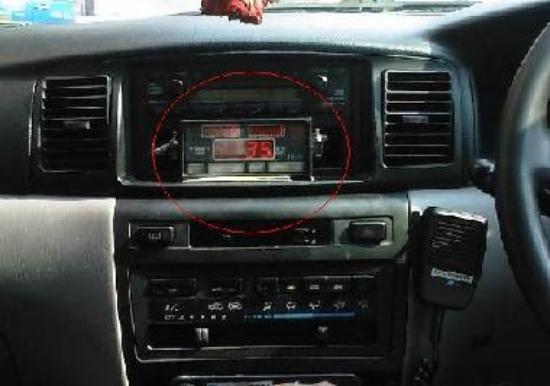 If the driver shakes his head, or announces a flat rate, smile and wave him away. If you get into the taxi and the driver tries to negotiate a flat fare, smile, and get out, then simply wave down another taxi, there are literally thousands of them on the road day and night, 24/7.

Although it usually is best to flag down a moving taxi, Bangkok has several formal and informal taxi ranks for the benefit of the locals. These are the easiest places to catch a taxi in those locations and the risk of being cheated is no higher than with a flagged-down moving taxi. These taxi ranks do not have any surcharge unlike the ones at the airports. On the other hand, some of these waiting taxis will not agree to take you to your destination. In that case you just have to walk down the line to the next waiting taxi. Quite often the picky drivers are at the head of the line since they have kept turning down fares. Conversely you have no obligation to take the first taxi in the line.

Taxi ranks in which security guards direct the traffic can be found, for example, at the MBK Center (on the side away from Siam Square), in front of Siam Paragon, and under the Phaya Thai Airport Rail Link station. Informal taxi ranks can be found in front of big shopping malls, large supermarkets like Big C, and some BTS (Skytrain) stations. For example, you can often find a large number of metered taxis and motorcycle taxis waiting at Exit 2 of the Wongwian Yai station while there are never any waiting taxis at Pho Nimit, the next station.

It can take quite some nerve to use these extensively, but they do offer the fastest way to move about during peak periods (as they weave in and out of traffic). You must negotiate a fare first (think around 40฿ for a short trip), make sure you wear a helmet and HANG ON. These can also be very useful if you find yourself way down the end of a soi and need to get back to the main road.

A handy tip from Bangkok Destination Expert Bill2p - One clever way you can use motos is, offer the guy 20฿ and ask him to bring you back a taxi. He'll zoom down to the main road and lead the taxi back to you. This is very effective if there are several of you needing a taxi. It is EXTREMELY unlikely that the moto guy will run away with the 20฿. There seems to be a code of honour there which is lacking in most tuk-tuk drivers.

Lastly, don't be penny-wise and pound-foolish when it comes to taxis; they're very cheap and with the sweltering heat and humidity, you'll never appreciate air-conditioning more than when you're getting around Bangkok.

It is not recommended that tourists rent a car for use in and around Bangkok. Apart from the fact that traffic is oppressive and challenging, parking options also are very limited. So with taxi's being so cheap, and the BTS Skytrain and MRT easy to negotiate, plus of course the Public River Boats, a car will be a hindrance.

If you have anything other than very light luggage, a rental car is a worthwhile option as is accommodation with any oakwood property, they offer free secure car parking.