(Please note: the main operator changed to BKK in 2010)

The public transportation system in Budapest is a favorite internal travel option for a number of Budapest visitors.  The system is efficient, inexpensive and runs throughout all of the major tourist areas of Budapest.  The system consists of a combination of the bus, trolley-bus, tram, metro, and train lines and is streamlined so that tickets for all of them can generally be purchased at the same locations.

This article is long, but comprehensive because many visitors are left a bit bewildered by Budapest's somewhat idiosyncratic system.  Your diligence will be rewarded with a good experience utlizing probably one of the best city public transports in the world.

EU citizens aged over 65 with valid ID (photo Date of birth on the document as well as EU symbol) travel free on Budapest trams, buses trolleybuses. This does not apply to the funicular or the chairlift. The ID must be carried and shown to inspectors on demand.

Visitors should note that crowded public transportation is the place where tourists are most likely to be victims of pickpocketing and other petty theft. This is not a major cause of concern but should be noted so that visitors stay alert during their travels.

Help to find out in BpMenetrend (Android experiments):

Budapest currently has four metro lines - M1 (Yellow), M2 (Red), M3 (Blue) and M4 (Green).  The Yellow line is the oldest underground transportation line in continental Europe and retains much of its old-fashioned charm.  Three lines meet at Deák Ferenc Tér in central Pest. First metros start running everyday at 4.45 AM and end around 11.45 PM. Trains run very frequently (3-5 minutes between rush hours and weekend, 1-3 minutes in rush-hours, 10 minutes late night). Avoid to travel in the rush hours (6-9 AM, 2-7 PM). Tickets are checked at the entrance at every station! 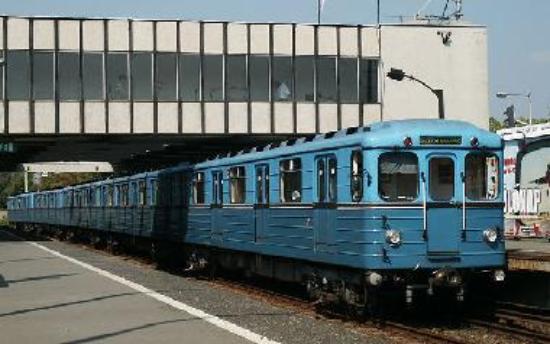 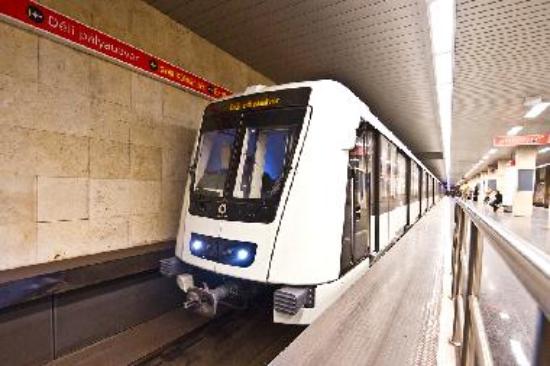 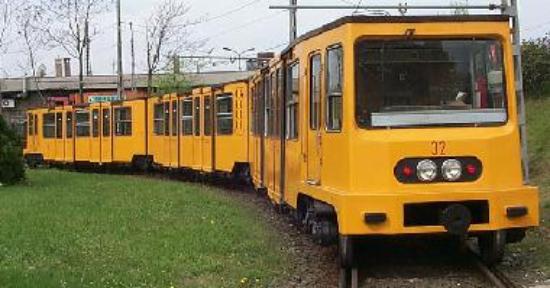 These trains run under Andrássy út on line M1 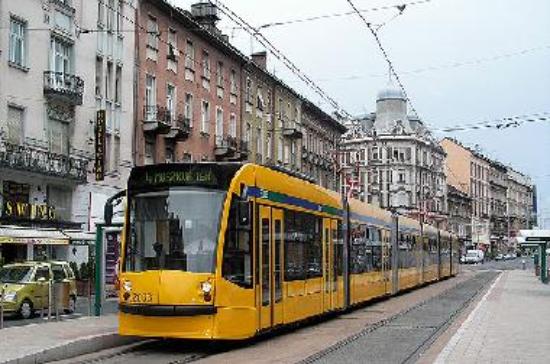 In addition to the trams, Budapest is served by numerous bus lines.  Bus 200E connects the airport with the Metro 3 terminus Köbánya-Kispest. Front door-only boarding on line 200E.

Bus lines of use to most tourists are the 7-7A-107 which connect the busy Keleti railway station and some square on the Buda side (Szent Gellért tér, Móricz Zsigmond körtér). Some other notable places that they stop along is Blaha Lujza ter (connection to the red M2 metro line, also trams 4 and 6), Ferenciek tere (very near Váci utca), and in front of the Rudas baths and the Gellert Hotel both on the Buda side.  Bus 86 is also very useful as it has a stop near the Gellert Hotel and runs along the river bank on the Buda side. Bus 16, 16A and 116 go to the Buda Castle from Széll Kálmán tér (connection to metro line M2 and trams 4 and 6). No. 16 goes forward to Deák Ferenc tér (connection to all metro lines). You can reach Gellért-hegy (Mt. Gellert) and Citadel with bus no. 27 from Móricz Zsigmond körtér (connection to tram 6 and to bus 7-7A-107).  Bus 105 connects Hősök tere (Hero's Square) to Deák Ferenc tér through Andrássy boulevard, before it crosses the Chain Bridge to Buda.

Please note: a lot of the Budapester buses have front door-only boarding. The bus driver checks the tickets! Some public transport passes and travelcards are not valid when the buses leave the city limits ! 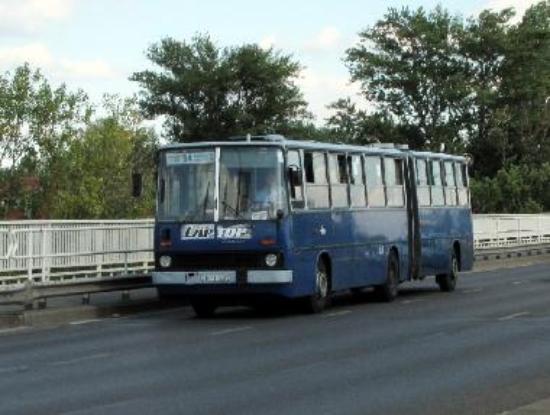 These buses are the part of Budapest.

They look much like buses except they're powered by electrical lines. One line that can be of use to visitors is the 70 which departs from the South side of Kossuth square across the street from the Parlament and cuts through the city center on Nagymező utca (Budapest's "Broadway") before crossing Andrássy út and cutting up Király utca on its way to the Városliget. (City Park). Front door-only boarding on lines 72, 73, 77, 79 and 82. 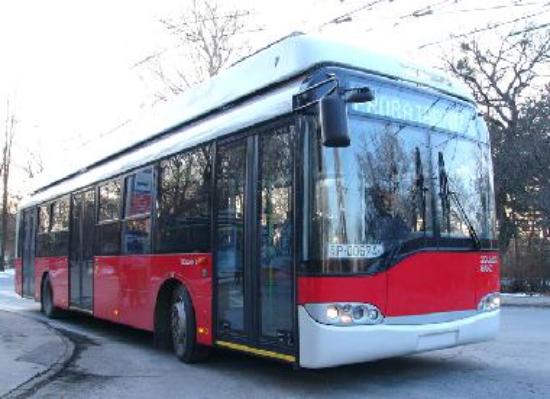 All regular transportation services stop around midnight (varies by route). Night buses replace the metro lines, major tram and bus routes and run through the night until normal service resumes in the morning. Separate schedules for night and day buses are posted at every stop. In the inner areas buses run very frequently (appr. 10-15 min.) Please note: there's front door boarding-only on most lines, except tram 6 and articulated buses. On Friday and Saturdays vehicles are often full with drunk young people.  Map 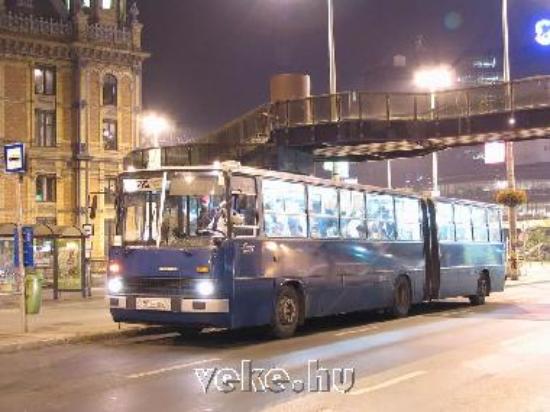 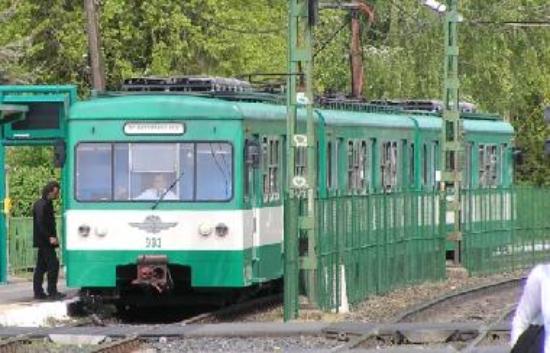 (green colored trains marked with H and a number 5 to 9) These old trains still serve the outer and suburban areas of Budapest.  Regular public transport tickets are only valid inside city limits. Supplementary tickets are required to travel outside the city border. Therefore if you are going to the popular tourist destinations of Szentendre or Gödöllö, remember to buy a round-trip ticket at a cashier window at one of the stations of HÉV (Batthyány tér or Szentlélek tér for Szentendre /line H5/, Örs vezér tere for Gödöllö /line H8/) and make a round-trip purchase.

(three lines: D11 (pink colored), D12 (maroon colored) and D13 (dark brown colored)) D11 and D12 run on weekdays and can be used with most passes (single and 10-ticket-block tickets, and some special passes are not valid). It's a great sightseeing tour in the Danube. D13 runs on Saturday and Sunday. Only those tickets are valid which are sold on the spot.

(trains haven't got any colour or number) You can use most of MÁV's local (személyvonat), semi-fast (sebesvonat) and 'zoner' (zónázó vonat) inside the city with passes without fees. On Intercitys, Railjets, Eurocitys, Euronights, and long-distance express trains (gyorsvonat) supplementary tickets are needed - even if you do not leave the border

Getting to the railway stations:

(buses numbered 300-899, usually yellow or white colored) All  Monthly and some daily/weekly passes are valid inside the city.

Connects Buda Castle to Clark Ádám tér. Quite an attraction itself and gives a great view of the city. You can reach it from Deák Ferenc tér with bus 16 and 105, and with bus 86 from Southern and Northern Buda. Please note: most times the waiting line at the ticket office is incredibly long, and it might even take an hour to buy a ticket 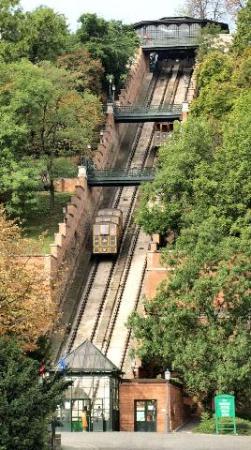 Two-person cabins that go uphill to János-hegy from Zugliget. Reachable by bus no. 291 from Nyugati pályaudvar metro station (M3). Does not operate in bad weather. Gives a great view to the city. 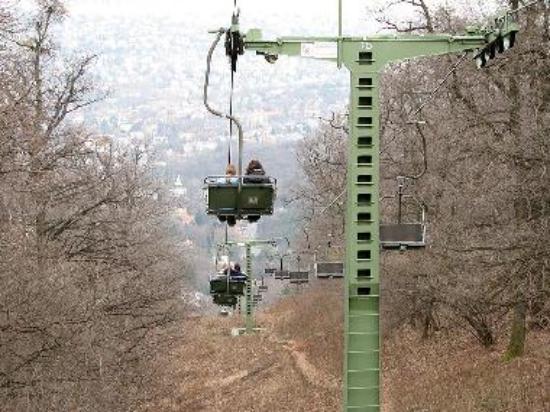 The cogwheel tram – numbered as tram 60 – connects the Széchenyi-hegy mountain and Városmajor. Bicycles can be transported with supplementary ticket. The Children's railway (a MÁV route operated partly by enthusiastic children – special fares apply) departs from there and terminates in Hűvösvölgy. Tickets and passes are available at "Pénztár" windows near the entrances of most metro stations. Many of these cashiers do not speak any language except their own native tongue (since 2009 new employees have to speak English), so it would be wise to be prepared with written requests in Hungarian for what you need. One can also find single tickets on sale at most newsstands, including ones at the airport. Sometimes (mostly on front-door only boarding routes) tickets are available on-board from the driver at an increased price. Now ticket machines are also available at nearly every startions.

In all cases make sure you validate the ticket as you board the vehicle (for above-the-surface transport) or entering the station (for the metro). Look for a small orange "box" on a pole that serves as a validator in the metros and newer surface transport vehicles. Tickets simply need to be inserted in the slot. A beep affirms that the ticket has been validated.

On older trams, buses, and trains the validator is a small red "box". Insert the ticket at the top, then pull the black handle toward you. The machine mechanically punches holes in the ticket validating it.

If you are transferring, make sure you validate the ticket for your first line or vehicle as well as your second line or vehicle. Keep in mind that once validated, each ticket is time limited so make sure your journey takes place within the permitted time.

Ticket inspectors wear blue or purple armbands and usually work in pairs or with the help of city officals. They will often ask to see your ticket on a tram or as you are entering or exiting a metro station to make sure it is validated properly. For this reason, it is important to keep your validated ticket until the end of your journey. An incorrect ticket type or an improperly validated ticket can result in a fine or the police being called. If you do have a valid ticket (that you are sure of), do not go into paying a fine, especially not on the spot, as some ticket inspectors make a living scamming tourists. Ask for the cheque.

EU citizens over 65 travel free on public transport in Budapest; require no ticket or pass apart from identification of age (and presumably of EU domicile) such as passport or driving licence.

Most of the young local people speak English or German, old people have a little Russian knowledge. Do not try to ask questions with Google Translate, it gives a very big stupidity. BKK's dispatchers are online 0-24h on  Facebook and available on phone + 36 1 258 4636.