Wiltshire: Things to Do

Wiltshire: Things to Do

A few ideas for some great days out in beautiful Wiltshire - whatever your interests there is bound to be something to please everyone.

Bradford-on-Avon
Kennet and Avon Canal Boat Trips -  the M.V. Barbara McLellan is a broad beam narrowboat built in 1982 and was specifically designed for leisure cruising. The public can take trips at weekends, Public Holidays and Wednesday afternoons.

Heritage Centre- The Calne Heritage Centre tells the story of Calne and its surrounding areas through a series of display boards around the Centre supported by interactive computer systems, pictures and artefacts. The Heritage Centre hosts regular exhibitions.  The Centre holds a huge amount of local memorabilia including exhibits from the Harris factory which was demolished in the 80s. Open Wed - Sat 10am - 4pm and Sundays 2pm - 4pm - FREE ENTRY

Atwell Wilson Motor Museum - Although the majority of the collection is vintage, post-vintage and classic cars  (including American models) the Museum also houses an impressive collection of Lorries, Classic motorbikes, Mopeds, Pushbikes, a large selection of vehicle manuals and other archive material, and a large collection of motor memorabilia.

Bowood House & Gardens - was built during the 18th century. Outside the house is surrounded by ‘Capability’ Brown’s stunning park; there are magnificent formal gardens, a rockwork garden; and arboretum. Bowood has been a popular choice as a location for various films.

Castle Combe - has been called 'The Prettiest Village in England' and visitors have been coming to enjoy its charms for at least a century. While there don’t forget to visit  the Castle Combe Racing Circuit which has a skid pan, kart track and 4x4 course offered by Drive-Tech Limited.

Corsham
Burlington (Cold War City) - lies 100 feet beneath Corsham.  A huge underground complex, that was built in the 1950’s, as a nuclear refuge for the British Prime Minister. The bunker now has a population of only four maintenance workers, yet sprawls over 240 acres and accommodates 60 miles of roads. Underground power stations supply energy for 100,000 street lamps and amenities include a railway station and a pub called the Rose and Crown.

Corsham Court - The earliest known records of a house date back to 978 when the house was a summer palace for the Kings of Wessex. Special guided tours can be taken of the Breakfast Room and Library.

Chippenham
Lacock Abbey, Fox Talbot Museum & Lacock Village - The Abbey featured in the first two Harry Potter movies and has been on the must-see lists of tourists from all over the world.  The Abbey's cloisters and side rooms were transformed into the classrooms at Hogwarts School while the location was also used for Harry's discovery of the Mirror of Erised.

While here explore the newly restored botanic gardens. The fascinating museum dedicated to the 'Father of Modern Photography' William Henry Fox Talbot, inventor of the negative/positive photographic process was once a resident at Lacock Abbey. Also walk around the uniquely preserved Lacock country village which was the location for the films, Pride and Prejudice, Moll Flanders and Emma.

Devizes
Kennet and Avon Canal Museum - has a range of exhibits that tells of the creation of the waterways link connecting London and Bristol, which emerged as a direct result of the Industrial Revolution, and the eventual commercial decline of the Kennet and Avon Canal, as well as its subsequent restoration.  Within easy walking distance of the centre of Devizes and the famous Caen Hill Flight of 29 locks. On the same site is the Wharf Theatre in an old warehouse.

Wiltshire Heritage Museum - home to the best Bronze Age archaeology collection in Britain. The Museum has outstanding collections that trace the fascinating history of Wiltshire, its environment and its people over the last 6,000 years. Explore the finds from Bush Barrow, described as the Crown Jewels of the "king of Stonehenge". Learn the fascinating story of the pioneers who created the science of archaeology here in Wiltshire 200 years ago. See items from some of the very first archaeological excavations in the Stonehenge and Avebury World Heritage Site.

Malmesbury
Abbey House Gardens - covering 5 acres the gardens (but not the house) are open to the public seven days a week. It is one of the main tourist attractions in England's oldest town.

Marlborough
Explore the High Street with its boutiques and the Merchant's House. Just 4 miles away is the World Heritage site of Avebury with its Stone Circle, Silbury Hill, Avebury Manor & Gardens and the Alexander Keiller Museum.

Salisbury
Salisbury Cathedral - Completed in 1258, this is one of the finest medieval cathedrals in Britain, which features the tallest spire in England that rises 404 feet into the air. Within the famously tranquil Close you can also visit the Salisbury and South Wiltshire Museum and Mompesson House.

Mompesson House - a fine Queen Anne town house, furnished as the home of a Georgian gentleman. The grounds feature a lovely rose garden.

Old Sarum - Iron Age hillfort and original site of Salisbury with ruins of the old Cathedral and excellent views across the city.

Wilton House near Salisbury - has been the country seat of the Earls of Pembroke for over 400 years. Often described as England's most beautiful country house. Some of the stately rooms appear as rooms of royal palaces in The Madness of King George and scenes from the the film Barry Lyndon were filmed in the Double Cube Room. Close by is the Wilton Shopping Village.

Larmer Tree Gardens - set high on the Cranborne Chase, providing exceptional views of the surrounding countryside. It is one of the most unusual gardens in England containing an extraordinary collection of Colonial and Oriental buildings, a Roman Temple and Open Air Theatre.

Old Wardour Castle - built in the late 14th century by John Lord Lovel as a luxurious residence. The hexagonal tower house is very unusual in England. Part of the film Robin Hood, Prince of Thieves, was filmed here.

Farmer Giles Farmstead - see the animals in their natural habitat and learn about farming from the past through to the present day. Outdoor activities include bottle-feeding the lambs, grooming the donkeys, tractor & trailer rides and an adventure playground. When the weather is bad there are indoor activities including a milking parlour, bouncy castle and a farm shop.

Salisbury City Tours - have an entertaining range of walks and tours of interest, both to the general visitor and the specialist. For information call 01722 342860.

STEAM - Museum of the Great Western Railway - located in a beautifully restored railway building. STEAM tells the story of the men and women who built, operated and travelled on `God’s Wonderful Railway´. World-famous locomotives, archive film footage and the testimonies of the ex-railway workers bring the story to life. Walk underneath `Caerphilly Castle´, step up on the station platform and climb aboard the famous `King George V´.

Swindon and Cricklade Railway - vintage steam and diesel- trains restored and run on a railway built by volunteers.

Swindon Designer Outlet - located in the beautifully restored railway works, 105 stores offer all the designer labels you could want at drastically reduced prices.

Trowbridge
Trowbridge Museum - is one of the last working textile mills in the town. It tells the story of the town and its people.

A very pretty, tranquil village on the northern edge of Salisbury Plain, located a few miles from Devizes. It has a beautiful village pond with ducks and geese, a village green, a traditional real ale pub - The Lamb Inn - serving good food, a Community Shop, the beautiful Church of St. Michael & All Angels, the privately owned Urchfont Manor and numerous quaint old houses and thatched cottages. Find out more at the Urchfont community website: Urchfont

May Day Bank Holiday every year 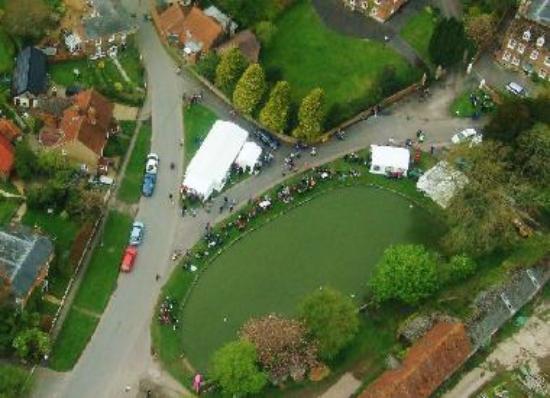 Now in its 18th year, Urchfont Scarecrow Festival takes place every May Day Bank Holiday - the first weekend in May (2nd, 3rd & 4th May in 2015). The original Wiltshire scarecrow festival, it is certainly the biggest and, arguably, the best event of its type in the county. Approximately 55 themed scarecrows are placed around the village. Visitors can buy a trail map containing clues that relate to the scarecrows. The pedestrian trail starts and finishes at the marquees by the village pond and winds around the village. There is a children's quiz sheet that follows the same route as the main scarecrow trail. First prize is £100, plus a £100 Lucky Draw with the programme.

At the village pond marquees include a Tea Tent with homemade cakes,  a Barbecue with high quality locally sourced meat, a Baked Potato Oven, a Beer Tent selling local real ales, and an Ice Cream tent.

A popular attraction over the Scarecrow Festival Weekend is also the Plant Sale.

Car Parking is entirely free, but donations to Wiltshire Air Ambulance are invited. Disabled parking is available at the Village Hall. 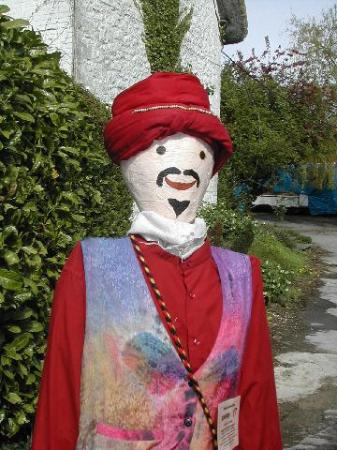 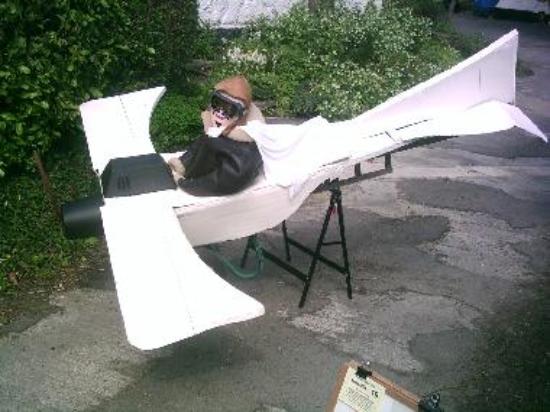 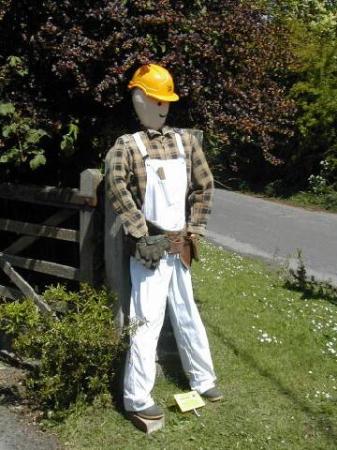 Longleat - has worked hard to create a reputation as a major family attraction, with an abundance of theme park activities and the world-famous safari park, but at its heart the estate still revolves around the superb Elizabethan country house. Set in 900 acres of parkland landscaped by Capability Brown.

Stourhead Garden & House - 18th-century landscape garden and Palladian mansion features temples, monuments and a tranquil lake.  The mansion is filled with Chippendale furniture and fine paintings.  Woodlands with a collection of exotic trees. Spectacular views from King Alfred's Tower, one of the finest follies in Britain and two Iron Age Hill-forts to explore.

Westbury
Brokerswood Country Park - is an oasis of 80 acres of precious, natural woodland. Visitors can spend a day and experience the Woodland railway, Adventure Land, Play Trails, Heritage Centre and undercover play area as well as simply enjoying the woodland with the sights and sounds of nature all around them.

Near Bath
Dyrham Park - spectacular late 17th-century mansion, garden and deer park. Victorian domestic quarters give an insight into life below stairs. Elegant formal gardens, woodland, and lakes to explore set in 274 acres. Dyrham Park was one of the houses used as sets for the 1993 film The Remains of the Day.