quite a nice and luxurious hotel, BUT... - Sarasvati Borobudur Hotel

$104
$31
View deal
Priceline$48
Hotels.com$65
Hurb$104
View all 16 deals
Prices are the average nightly price provided by our partners and may not include all taxes and fees. Taxes and fees that are shown are estimates only. Please see our partners for more details.
DrWJakarta
Yogyakarta Region, Indonesia
1533

quite a nice and luxurious hotel, BUT...

... extremely loud and noisy mosque prayers via loudspeakers at full volume right next to the hotel. And this takes place five times a day, with the most annoying being the one at around 4am in the morning. As such, your early morning wake-up call is free and guaranteed. Whether you can sleep again thereafter remains to be seen. Unless you go for a sunrise trip to the nearby Borobudur temple.
Besides that, this hotel is ok but overpriced with below average food quality.

Room tip: with all rooms being to the outside and, there a really no "good rooms" there due to the high mosque noise
See all 324 reviews
Nearby Hotels 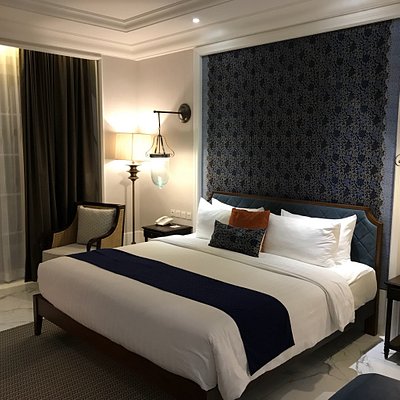 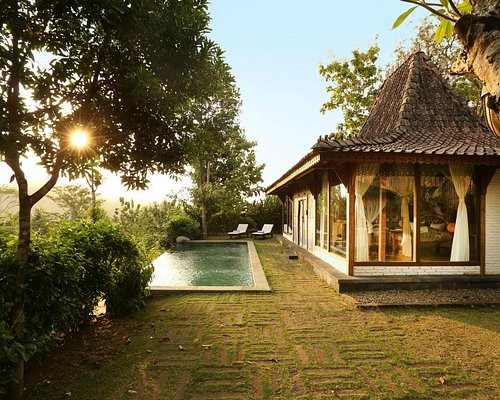 I just finished a 14-day stay at Saraswati because of work reasons. I seldom write hotel reviews but felt compelled to help other tourists know what they will be in for. If you are the kind who prefers to sleep in late on your travels, then the mosque, which is just next door will blast its speakers into your room without fail at 4am every morning. The mosque also has a snooze function where they reprise their call to prayer with aplomb at 4:15am. NO amount of earplugs will save you from the audio assault. When I mentioned this to the hotel crew, they just smiled and shrugged their shoulders as if I should know what I'm in for when I signed up for this. Unless you are a muslim traveller who wants to be punctual for your 5-times a day prayers, you should seriously relook your booking.

My colleague unfortunately reserved an extra day (for work contingency reasons) at the hotel for the 3 of us. It came up to about 3 million rupiahs. We decided not to stay an extra day but the hotel refused to refund us the money. They asked us to contra off the difference from the meals we had there & laundry services. And then they made a mistake calculating the difference & made us pay extra when we checked out. I gave them the benefit of the doubt because the indonesian currency involves several figures.

And for us who were there for work reasons, the wifi connectivity is simply unacceptable. My colleague also has his bar of soap changed everyday despite putting it aside for reuse. Not exactly an environmentally conscious hotel. Now that I've ventilated, adios & have a good stay at competing hotels.

This review is the subjective opinion of a Tripadvisor member and not of TripAdvisor LLC.
pickles00005
NYC
1
Reviewed October 11, 2012
Great Service, Great Location

This review is the subjective opinion of a Tripadvisor member and not of TripAdvisor LLC.
MikeofMelbourne
Melbourne, Australia
3732
Reviewed October 4, 2012
Great location, great grounds and people

I suspect the hotel has read some of the comments and made changes. The rooms are clean and in good condition, the staff quick and attentive and the grounds beautiful. The breakfast was also good and the evening meals excellent and comparable in price with non-hotel food in Bali. the hotel has a magnificent lobby where you can lounge around and the rooms are very comfortable. The style is Javanese so the rooms are in arched colonades around a beautiful central garden. As a family of five we took two rooms and got a third bed in the kids' room without trouble. The rooms are comparable in size to an Australian motel. The peak season is August-September and as we went in early October there were few other guests. Borobodur temple is only a hundred or so metres down the street, but the great thing is that this town has not been spoiled by tourism and you can go for a walk down the street and see ordinary people and not be hassled. As most visitors to the temple seem to be bussed-in from Jogjakarta and don't stay there are not many eating options in the town. There are a number of street vendors and a few warrung, an Indomaret (like 7-11 but better) with an ATM and an Indonesian fried chicken outlet called Olives that does a magnificent chicken. We didn't try their hamburgers, but were told be by a local who'd lived in Australia that they weren't great. This is a town for walking and there are a number of nearby Hindu temples, markets and a couple of laundries where you can get things cleaned if you don't want to use the hotel service. The locals are very friendly and while you'll get some curious looks if you go for a walk up some of the side streets we had no concerns. We also dropped in to the local mosque and joined the local soccer side for training at. Entrance to Borobodur temple is $20US (somewhat more for sunrise) and half price for kids and while there are relatively few sellers of shirts, kites, toys, pens, little stone carvings of the temple and the stupas going in, there are many who'll find you on the way out. They are however less of a hassle than those of Bali. If you go to the trouble of going to central Java, why stay in a large western-style hotel an hour from the reason for going there?; Enjoy some of the real Indonesian community life in Borobodur.

Room tip: The rooms on the temple side have a little verandah and you can just see the top of it. They also overlook the pool.
Ask MikeofMelbourne about Sarasvati Borobudur Hotel
2  Thank MikeofMelbourne

This review is the subjective opinion of a Tripadvisor member and not of TripAdvisor LLC.
Dirk L
Stellenbosch, South Africa
8227
Reviewed October 3, 2012
Good value, everything smooth

We were looking for an affordable place close to Borobudur temple which was not seedy.Based on other tripadvisor reviewswe selected Saraswati. EXCELLENT CHOICE!!
The foyer was a bit overwhelming, but we liked the clean and functional room. We were lucky to have a room with a view of the temple in a distance and also overlooking the pool.
The room was super cleanand everything worked well. Weeven got a hair dryer from reception to match the power supply points
The breakfasts (included) and optional evening meals were great and tasty.
Staff was very helpfull.
Saraswati was theright choice

This review is the subjective opinion of a Tripadvisor member and not of TripAdvisor LLC.
BangkokFarang555
Bangkok
3228
Reviewed September 25, 2012
Nice rooms, very convenient location for Borobudur

The comments from FoolishSaint are dead on. There are not many other places to stay nearby so I was pleased to not have to settle for a rundown place. You can do the sunrise tour of Borobudur, you can walk out of the temple, enjoy your complimentary breakfast back at the hotel, and return to the temple for the rest of the day ON THE SAME TICKET. The swimming pool was eerily underused but nice looking. Don't miss local places for lunch or dinner, such as Paksi Coffee House.

Room tip: Rooms facing the pool are quietest. The poached eggs at breakfast are hard to find in Asia. Use the map you get at check in and stroll to the night market.
Ask BangkokFarang555 about Sarasvati Borobudur Hotel
Thank BangkokFarang555