My short visit in Milan

I stayed in this hotel for one night. The hotel is far away from the metro line. it is only possible to get to the hotel by car or by taxi. The hotel does have a free shuttle service but only in the morning and early evening The staff were friendly and helpful but things like the WiFi was not working so well. The rooms were comfy enough and I had a good night's sleep.The restaurant is literally in the middle of an industrial desert - the nearest alternative seemed to be about a 20 euro cab ride away, so you are stuck with the Hotel Restaurant. The brekfast was good enough.More

Show less
Room tip: The rooms are about the same
See all 673 reviews
Nearby Hotels 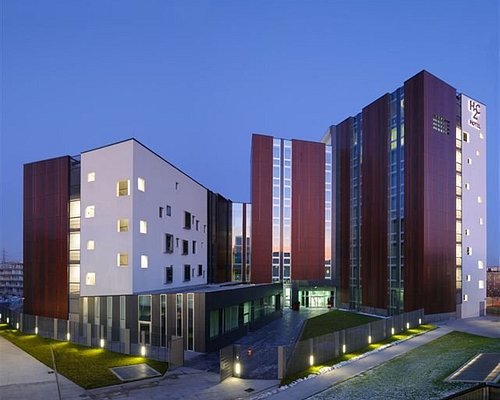 The hotel is absolutely awful. The windows were broken, the third bed was a camp bed, something that wasn't mentioned while we were booking the room. Service was outrageous and the WiFi connection was slower than a grandfather's tractor.

Good morning Anon_ymous345689, first of all I'm really sorry not to see your name because I could have the possibility to check your reservation and the assigned room. I'm really sorry to read such a review; I can't understand what happened beceuse we didn't have complains about "broken windows" so I don't know if you are speaking of our hotel or maybe another. The third bed, as clearly written in the web site, is a sofa bed. We have written it in the web site. If you want better explain what happend we are here; in this way I can't understand.
Thank you
Aurora Pippi
Resident Manager

Report response as inappropriateThank you. We appreciate your input.
This response is the subjective opinion of the management representative and not of TripAdvisor LLC.
Dominic M
Hove, United Kingdom
19899
Reviewed December 11, 2018
An Oasis of mediocrity in an ocean of dull

I ended up here by accident - I had a meeting at a nearby hospital, and this was the hotel that appeared to be the closest. Had I realised that it was essentially a service station stop-off point, I would have looked elsewhere, but I thought I'd give it a go.

To be fair, the desk staff were friendly and welcoming, but there wasn't much to write home about beyond that. The rooms were comfy enough and I had a good night's sleep, but were dated, and didn't have any USB ports to charge your phone. The TV reception was iffy, and the internet wasn't the fastest.

The biggest issue was with the restaurant. This place is literally in the middle of an industrial desert - the nearest alternative seemed to be about a 20 euro cab ride away, so you are stuck with the Hotel Restaurant. The menu is limited and basic - Tomato and Mozzarella salad is just that. A bland, sliced tomato (arranged vertically, they seem to taste better that way, apparently) and a chunk of Mozzarella, with a handful of basil leaves. Some of the pasta appeared to be reheated, and my rib of beef was tasty, but very fatty. The bread rolls provided would be classed as offensive weapons in some countries - "Crostini" said the rather snotty waiter - or "Stale" as they are known in the UK.

Breakfast was worse - al-dente boiled potatoes, spinach and fatty bacon, although the usual selection of pastries was OK I suppose.

So, you will get a decent night's sleep here, and it's cheap for Milan, but use it only as a stop off point when you are passing through.

Room tip: Nice views of the mountains at the back of the hotel.
Ask Dominic M about Holiday Inn Milan - Assago
Thank Dominic M

This review is the subjective opinion of a Tripadvisor member and not of TripAdvisor LLC.
Timothy B
Lucerne, Switzerland
329169
Reviewed October 12, 2018 via mobile
Service station hotel

However it is only possible to get here by car. Public transport is metro line 2 costing 2.50 from the centre

When I arrive there was no buses and no taxis. I rung the hotel and they told me that the Congress hotel close by should have taxis which I found one so another 8.50 was the taxi cost

This review is the subjective opinion of a Tripadvisor member and not of TripAdvisor LLC.
MaisieP_13
Ipswich, United Kingdom
4334
Reviewed September 23, 2018 via mobile
Very good

We stayed here for one night on our way to Sarteano. We had not booked a room, just called in on the off chance. The receptionist was very helpful. We didn't have an evening meal just a bar meal in the hotel which was freshly prepared. We did have breakfast which we were very happy with, lots to chose from, all fresh, self service, eat as much as you like. We elected to park in the secure parking area for five euros. No complaints from us.

Dear Maisie P., first of all thank you for your review and thank you for the beautiful words. I will share the comments with my staff.
And I have to say one thing: I'm from Sarteano!! Incredible, isn't it? So better happiness to read the review.
I hope to welcome you again on the way back, please contact me
see you soon,
Aurora Pippi
resident manager

Report response as inappropriateThank you. We appreciate your input.
This response is the subjective opinion of the management representative and not of TripAdvisor LLC.
Igor D
1
Reviewed September 18, 2018 via mobile
The worst Holliday Inn in my life

Dont recomend to anyone only in case of real emergency. Totally inorganised from reception to restaurant. Missing personel douring dinner time. Cleanless of rooms and hotel in general is very bad.
Im not sure how this can be a 4☆ hotel???

Good morning Igor D,
what a bad reviw! What happened? I've never recived such a bad review about our hotel. Maybe you arrived in a bad moment when all my staff was very busy. I apologize for this bad experience. I can say usually the guests experience is a potive one.
I'm really sorry.
About the cleanless of the rooms I have serous doubts...our rooms are deep clenaed every day so I really can't understand.
If you want to give me more info don't hesitate to contact me
thank you very much
Aurora Pippi
Resident Manager

Report response as inappropriateThank you. We appreciate your input.
This response is the subjective opinion of the management representative and not of TripAdvisor LLC.
View more reviews
PreviousNext
1234…
<script type='text/javascript' c