Everyone thought it was someone else's... - Sally's Garden Cottage

“fabulous”
aEdVXzYyX2lRcg==
other travelers have booked this property 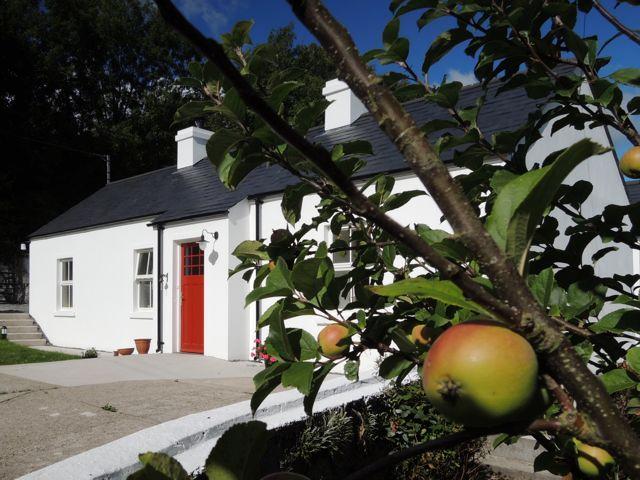 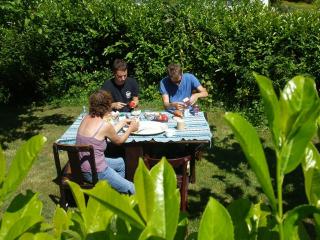 Excellent - based on 29 reviews
Write a Review

30 helpful votes
“Everyone thought it was someone else's BUSINESS”
Reviewed September 3, 2016 for a stay in August 2016
2
people found this review helpful

Sally's Garden Cottage is indeed an authentic olde-world farm cottage; which has been transformed into the modern age.
There is absolutely no mobile phone connectivity; I most certainly tried from every side and corner of SGC. There is a landline, but as this is barred to mobile numbers; this only helps a little.

On the day we arrived, a gentleman arrived with Bread Milk Caffitierre Coffee and Chocolate (Clearly a DIETICIAN in a former life?)

He announced himself as the owners husband - Mr Sands. The owner(his wife); he said had flown to Germany for a few days. I asked Mr. Sands about an item in the welcome guide to the cottage. "I don't know", he said, "my son wrote that."

The cottage has two bathrooms that are side by side but entirely separate. One furnished with a shower over bath, WC. The ensuite has a power shower/WC/sink. However as we only managed luke-warm water from the taps and had to boil a kettle to wash up; the bath was of no use or it's shower.

We had an error message on the TV The Digi-Box is not receiving a signal; please contact SKY or insert your SkyCard. We had asked about the TV error, but could only leave a message at the owners home as no one was picking up.

3 days later, and admittedly apologetic owner called us and asked what the problems were? She said she had been in Germany and her husband had been on tour in the UK. There is seriously NO POINT having a large notice board in the kitchen; with the message call here if you have any queries? Then going away leaving no-one in charge and not even telling the people who are renting your cottage; that they will have to "wing-it".

I asked the owner about the TV problem; and she replied, "We never have any issues, when there are teenagers in the party renting". I confess I was cross. "Am I too old then or stupid to rent a cottage?" I also pointed out that I had a career in a highly scientific and technical, profession; but didn't expect to have to guess my way around the cottage.

Specifically when I asked about the TV; she said she had no idea, but if I would suspend my holiday and babysit her cottage; she would send someone out. I declined as we had so many people we needed to see.

I then asked the owner about us only having luke-warm water. That is easy; just press BOOST. Oh that is great; where is the Boost button, (remember I am asking the Cottage's owner); "I don't know where the BOOST button is" I eventually found that the boiler stat was set to low, and we got some water when I turned it to Max.

A day or so later after the owner had phoned the UK for advice; we were told Boost was a shower head symbol; sadly the control unit has two entirely separate icons featuring a showerhead. When we got up on Sunday our last day I looked forward to having a bath, but was met with luke-warm water again.

Finally the car access to the cottage is up an old farm track to the back of the cottage; there is a sharp 90 degree bend off the single track access road and another 90 degree turn half way up. This is do-able in a small car, but is very tight and unlight. So coming back to the cottage after dark is "not-friendly". I haven't tried but would be surprised if an estate car could do the turn(s).

Date of stay: August 2016
Liked best: Location
Liked least: Hands off attitude and lack of knowledge from the owners.
Traveling group: Spouse/Partner
Would you recommend this hotel to a friend?   No.
Was this review helpful? Yes
This review is the subjective opinion of a TripAdvisor member and not of TripAdvisor LLC.
Dear Mr Jenkins, our sincere apologies for all the issues that arose during your stay at Sally's Garden cottage. We shall provide clearer instructions for TV and hot water systems for future visitors. As the reviews of previous guests indicate, we endeavour to offer our guests a comfortable and enjoyable stay at Sally's Garden cottage.
This response is the subjective opinion of the management representative and not of TripAdvisor LLC.
Problem with this review? Thank you. We appreciate your input.

Everything we needed and more, will come back soon xx good location for a visiting further, we drove into carlingford in no time

Date of stay: July 2016
Liked best: the privacy
Traveling group: Extended Family
Would you recommend this hotel to a friend?   Yes.
Recommended for:
Was this review helpful? Yes
This review is the subjective opinion of a TripAdvisor member and not of TripAdvisor LLC.
Problem with this review? Thank you. We appreciate your input.

This house is modern, warm, comfortable and yet maintains its "quaint" factor. Despite high winds and wild rainstorms, we were cozy and warm here. The house features all the modern conveniences but has some "old country" flavour and charm. Would highly recommend this property.

Date of stay: November 2015
Liked best: Location
Liked least: weather!
Traveling group: Teenagers
Your age range 50-64
Would you recommend this hotel to a friend?   Yes.
Recommended for:
Was this review helpful? Yes
This review is the subjective opinion of a TripAdvisor member and not of TripAdvisor LLC.
Many thanks Carol and family! Wishing you a happy and healthy 2016.
Looking forward to welcoming you again some time.
Warm Regards, Barbara
This response is the subjective opinion of the management representative and not of TripAdvisor LLC.
Problem with this review? Thank you. We appreciate your input.

18 helpful votes
“Chill Out in Sally's Garden Cottage”
Reviewed October 26, 2015 for a stay in October 2015
1
person found this review helpful

This is my second stay at this brilliant Cottage in Burren. (My Brother in Law and I use it as a "Bachelor Pad" because we can't all stay at my Son's House!)
It suits me, because it is only a 10 minute walk to, or from; there.
If you wish to be in the heart of the Co.Down & Mourne area; this is the place to be.
The Cottage has one Double and one Twin Room. There is a full size Cot and High Chair.
The kitchen / dining area has a table for four persons, with a four Ring Ceramic Hob and a Fan Oven/Grill.
There is also a Washing Machine.
The under floor heating is excellent and , for us "Hairy Heathen Scots" ; too warm!!!
For the second year running; we had to turn down the temps!! The Cottage holds the heat well and has the option of a wood fired Burner in the Living Room! it would need to be Arctic temperatures for me to be tempted to light it!!
Absolutely Brilliant!

Date of stay: October 2015
Liked best: The care that has been taken to create a "Home from Home"
Traveling group: Other
Would you recommend this hotel to a friend?   Yes.
Recommended for:
Was this review helpful? Yes
This review is the subjective opinion of a TripAdvisor member and not of TripAdvisor LLC.
Many thanks Doug and Norman for being wonderful guests and for giving us a glowing review. Hope to welcome you again at Sally's next year, warm regards, Barbara
This response is the subjective opinion of the management representative and not of TripAdvisor LLC.
Problem with this review? Thank you. We appreciate your input.

Lovely cottage that lived up to all our expectations. Very peaceful and beds comfortable, slept so well. There was plenty of space and everything was very clean. The location was great for everything we wanted to do and the owners were very helpful and communicated well with us.

Date of stay: July 2015
Traveling group: Spouse/Partner
Would you recommend this hotel to a friend?   Yes.
Was this review helpful? Yes
This review is the subjective opinion of a TripAdvisor member and not of TripAdvisor LLC.
Problem with this review? Thank you. We appreciate your input.

13 helpful votes
“Beautiful cottage in a picturesque setting”
Reviewed August 3, 2015 for a stay in August 2015

This cottage was spotless, well furnished and very stylish. It is in close proximity to Warrenpoint, Rostrevor and Castlewellan. Couldn't recommended it any more highly.

Date of stay: August 2015
Traveling group: Spouse/Partner
Would you recommend this hotel to a friend?   Yes.
Was this review helpful? Yes
This review is the subjective opinion of a TripAdvisor member and not of TripAdvisor LLC.
Problem with this review? Thank you. We appreciate your input.

We stayed at this cottage so that we could visit our newly born grandchild for a few days but still give our kids space to cope with their new arrival. What a treat it was for us.
Superbly located, spacious and beautifully clean. Modern kitchen appliances in a traditional setting. Tasteful decoration. Need I say more other than our relatives living locally came to join us for breakfast just to sit in the lovely garden.
A home from home (only better!).

Date of stay: June 2015
Traveling group: Spouse/Partner
Your age range 50-64
Would you recommend this hotel to a friend?   Yes.
Was this review helpful? Yes
This review is the subjective opinion of a TripAdvisor member and not of TripAdvisor LLC.
Problem with this review? Thank you. We appreciate your input.
Previous Next
1 2 3 4 5
Updating list...
Do you own a vacation rental? List it here.

Looking for a place to stay in Warrenpoint?
View all 5 vacation rentals