Magnolia Resort
Book now! This hotel is likely to sell out soon.
Lock in the lowest price from these sites

$116
View deal
Expedia.com
Hotels.com
Travelocity
View all 6 deals
Prices are the average nightly price provided by our partners and may not include all taxes and fees. Taxes and fees that are shown are estimates only. Please see our partners for more details.
Pete F
Grantham, United Kingdom
602400

My wife and I who are of the more senior variety, have stayed at this hotel for about seven years, but also visit many others on our travels.
We find it really special, and the main reason we believe is that it is family owned and run. There are rules, but on reflection these are simply to keep up the standards and quality of the whole establishment.
The whole environment is one of peace and quiet enjoyment. It is perhaps not a venue for the young and more boisterous couples, but it is not a 'care home' either, and the young at heart are welcomed and appear to thoroughly enjoy what is on offer.
The staff are simply delightful, nothing is too much trouble, and we have found them all warm and friendly.
Much is written about the breakfasts. I would say that the food offered is of first class quality, and is always freshly prepared. This is a small hotel, one cannot expect lavish buffets, but in my opinion they are not required anyway.
The on site Rosebud Bistro has an excellent A-la carte menu, and again the food quality is first class.
Will we return again, we most certainly hope so.More 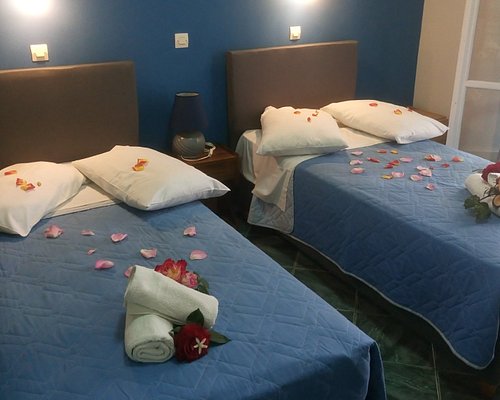 We spent one week here at the Magnolia,our fifth return.It is a beautiful hotel in peaceful surroundings.we love everything about it.The family and staff who run the hotel are absolutely lovely.The pool area is stunning.The rooms are beautiful and kept spotlessly clean.we shall be returning its one of our favourite holidays.
Thank you to you all for making our holiday perfect once again.

This review is the subjective opinion of a TripAdvisor member and not of TripAdvisor LLC.
timetable
westyorkshire
1416
Reviewed July 1, 2019 via mobile
Friendly and relaxing

We spent 11 nights at the Magnolia. The rooms are of a good size and were kept spotlessly clean. We particularly liked the electric blinds which kept the sunshine out in the early morning. Air con was good. The towels and bedding were changed probably every 3 days but certainly not longer than that.

All of the staff were extremely friendly and always keen to ensure we were enjoying our holiday.

The pool area is lovely. Never a problem with sunbeds and the pool was never crowded. The pool towels were exchanged when requested.

We found the breakfast more than adequate especially for a hotel of this size.

All in all we had a lovely peaceful stay at the Magnolia. Thank you to all of the staff who helped make our holiday so enjoyable.

This review is the subjective opinion of a TripAdvisor member and not of TripAdvisor LLC.
SJMACD
Battle, United Kingdom
7648
Reviewed June 25, 2019 via mobile
Hottest hotel ever

Nice place and a bonus being adults only but the rooms are unbearably hot. The air con does not work sufficiently at all and the room is permanently like an oven. Breakfast is limited but good enough. Kateleios is a lovely small place and we’d come back but would probably get a villa.

This review is the subjective opinion of a TripAdvisor member and not of TripAdvisor LLC.
KimW3514
613
Reviewed June 20, 2019
Overated!

Hotel is reasonably nice to look at, especially the pool area. However, the managers/owners are quite unpleasant. We stayed for a week and used the hotel as a base as we like to explore. The rooms are reasonably comfortable and clean (I have experienced better), but we had one set of towels for the whole week - never changed. The receptionist mentioned it might be a good idea to put them outside on the balcony to air. The rooms are very dark and quite cold, which is fine for the hotter months but felt quite damp during May, and of course, used towels aren't going to dry in those conditions. Even the maid would put them on balcony to dry. Bedding also not changed during our stay. 1 and a half toilet rolls supplied for the whole week. Half a roll when we first arrived (no spares left) and a further roll only left when that one ran out, and nothing replaced the day before we left. I took to getting toilet roll from the bar lavatories as the reception staff had a very unapproachable and accusing attitude. When I asked if tea or coffee was supplied with the kettle and chipped mugs in the room I was greeted with a look of horror and told "No! You have a lemon tea bag each, it is your welcome drink!" While I don't expect something for nothing, this place is penny pinching to the highest degree. The beds are also not as comfortable as they look and pillows are well used and lumpy. The bar and restaurant staff were very good and friendly, but the receptionist and managers were just plain rude. On the day we arrived, there were no towels in our room and when I asked for some I was told that they were in the room on the bed. The receptionist knew that as she had apparently checked the room herself. After my husband was sent back to double check (yes really) and he confirmed that there definitely weren't any towels in our room, some were eventually sent to us. The pool towels that they provide also seem to be a problem. They give the impression that they will change them during your stay, but don't bother asking them as you will be told to dry them on the balcony along with everything else. And they will also start chasing you for them about a day and a half before you go home as they need them for the next guests. Honestly, why bother with them? Breakfast is ok, not a lot of choice but it is ample. Pool bar does some nice snacks and lunches. Can't comment on the evening restaurant as we never ate there. Everything in the reception area looks nice but you daren't touch anything or sit on anything because it appears to be just for show! Reception staff are literally 'going through the motions' of appearing friendly but they really can't be bothered. You will usually get a 'robotic' "hello" and occasionally "have you had a nice day?" I really don't know why they bother though, as before you can answer they've tended to turn their back on you, or put their head back down to carry on with whatever they are doing and you're left standing there with your mouth open looking like and idiot. The worse Greek hospitality I have ever come across. It's a shame because this hotel is in a lovely quiet location and has a lot going for it aesthetically, but looks can be very deceiving. I've rated this review as average, but if it was just based on hospitality it would be a big 0

This review is the subjective opinion of a TripAdvisor member and not of TripAdvisor LLC.
131tinaa
Guernsey, United Kingdom
711
Reviewed June 16, 2019 via mobile
Peaceful hotel

My husband and I stayed at this hotel on a b&b basis for 14 nights from 28 May 2019. The hotel was exactly as described by Thomas Cook, it was very picturesque and peaceful. The average age of the guests was 50-70 but we were happy with this because we are in that age bracket ourselves.

We will almost definitely stay at this hotel again in 2020, the area around the hotel is great with only a short walk (less than a mile) to the beach, we loved the little beach and went for several hours most days.

I would agree with previous reviews that the only slight let down was that breakfast could have been a bit more exciting however the main thing for me was that although towels were changed every three days they weren't changed more often even if they were obviously dirty. One day our towels were changed but the bath mat with dirty footprints was left. The beds were changed every three days but other than that they weren't made. I've travelled all over the world but have never stayed anywhere where they do not make your bed on a daily basis even though we leave our beds tidy I expect to get back to my room and find the bed straightened and made.

These are only little things but not what you would expect from a four star hotel.

This review is the subjective opinion of a TripAdvisor member and not of TripAdvisor LLC.
View more reviews
PreviousNext
1…789…115
<script type='text/javascript' crossorigin='anonymous' async onerror='__scriptLoadError(this,true);' src='https://stat