Katie and Thomas are great hosts.

The accommodation are well set out, the terrace where you can relax and enjoy the view over the Rinjani is amazing. Really friendly staff. The food is good. And the dogs are so cute.

They also help with anything you need. Can organise trips anywhere at reasonable prices. We had a traditional Sasak lunch at friends of them, we did a one day hike seeing rice fields, waterfalls (loved it), the Monkey forrest and coffee making process with a nice guide. They also organized a one day trip to Gili Kondo and Gili Bidara for us.
The guys also hiked the Rinjani from their place and it was well organized.

You will be glad you stayed.More

Show less
Room tip: They have several options of rooms depending on your budget
See all 165 reviews
Nearby Hotels 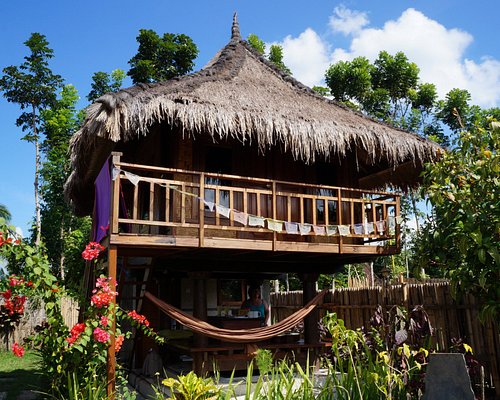 We arrived at Les Rizieres after crossing the narrow sea between Gili Trawangan and Lombok.

However the trip to Lombok was eventful. We got a fast boat over the narrow sea, which thankfully was not choppy. If the water is choppy DO NOT TAKE A BOAT. Unfortunately the safety of the passengers doesn't seem to matter in these parts, so for your own wellbeing only travel when the water is calm.

Our boat arrived at Teluk Nara, but unfortunately we had to wait for an hour for our driver the show up. It was like Bali time but twice as slow. However it turns out that the driver was there all along, but had just not decided to come to greet us. Unbelievably frustrating, but nobody seems to be a hurry in these parts.

The drive to Les Rizieres took just over 2 hours. It was evident during the journey that, compared to Bali, Lombok has a lot of catching up to do. The local bus service was worth watching though as, if the bus is full, people just sit on the roof. You wouldn't even get that sort of behaviour in Glasgow.

Anyway on to the important part - Les Rizieres. Overall we were very impressed. Thomas and Katy are French and that is clearly evident from the way that they run their homestay. The house is lovely and the the level dining area is great for lounging around. Their three dogs are really friendly too - Madu, Lulu and the other one.

Breakfast was delicious and they have a good menu if you fancy a snack or something more substantial. I had a tempe burger for dinner one night which was very tasty.

We only stayed for 2 nights so didn't have time to do many of the various activities on offer. However we did manage to do a walk through the paddy fields to the local monkey forest, via a waterfall. It was a great walk, but if you do this please note that you will be knee deep in water a few times. I was unfortunate enough to have a leech suck at my ankle for a while before I could remove the bugger. I also got a big red ant stuck in my flip flop and the wee moron took it upon himself to sting me several times before I squashed him.

During the walk you will be approached by countless barking dogs. I don't think they have any intention of biting people, but nonetheless I suggest keeping your distance and have a stick in your hand just in case you need to shoo them away.

As for the monkey forest, we'll don't go there thinking it will be like Ubud. We saw one macaque hiding up a tree. The black monkeys were nowhere to be seen, which by all accounts is normal. So do the trip for the lovely walk and if you see any monkeys then treat that as a bonus.

There was a storm during our stay at Les Rizieres, which knocked out the power. Thankfully they have a backup generator at the house to account for such events. They also have wifi so there is no requirement to speak to people if you don't want to.

This review is the subjective opinion of a TripAdvisor member and not of TripAdvisor LLC.
af1957
Paris, France
22
Reviewed December 2, 2016
Comfortable and friendly with good food

We stayed 4 nights here, which was just right for enjoying all the outings arranged by Thomas and Katie with competent, friendly guides whom they know well. The accommodations are clean and comfortable, Thomas and Katie are nice people and great hosts, and the food served (breakfast is included and other meals available at very reasonable prices) was consistently good. Everybody works hard, from tending the lovely garden to preparing food to keeping everything immaculate, and one gets the impression of a well-run establishment based on honesty and respect for each other and for guests.

This review is the subjective opinion of a TripAdvisor member and not of TripAdvisor LLC.
Vildo
Rotherfield, United Kingdom
13756
Reviewed October 4, 2016 via mobile
Don't look any further.

Simple as the title says. We stayed in the rooms with bunk beds and they were lovely. No air con was no problem. Bathroom simple and always clean. Amazing food every night, local & European. Nice staff. Chill out with a beer overlooking rice fields was pretty special. Thomas & Katie clearly know what they're doing and how to do it. Thomas even took us on a day trip once he couldn't organise a local guy and guided my mother thru her first ever snorkelling session (at 58). Due to recent Rinjani eruption (and subsequent closure), our original plans were messed up. Thomas gave us plenty of alternatives. I probably can't give enough praise, so I'll point out the only minus point. Awful taste in music, why would you ever play Norah Jones?

This review is the subjective opinion of a TripAdvisor member and not of TripAdvisor LLC.
Fenbr
Jakarta, Indonesia
134
Reviewed October 3, 2016
Lovely stay

We had a very nice stay at Les Rizieres. Thomas and Katie welcomed us and were very friendly and accessible during our stay. They arranged many things to do for us, including a nice hike through the area. Staff is very friendly and speak quite good english, french and dutch. Our room was very new and comfortable. The only remark would be the mosque that is relatively close and woke us up in the morning.

This review is the subjective opinion of a TripAdvisor member and not of TripAdvisor LLC.
jenna_lou_bd
Leeds, United Kingdom
4716
Reviewed July 25, 2016
A small piece of paradise

Les Rizieres was the first stop on our honeymoon and we felt as though we'd arrived in paradise.The accommodation is next to the rice fields, and when sat on the upstairs terrace, the view is spectacular. Our room was lovely, both cosy and clean, as was the bathroom. The owners, Thomas and Katie, are welcoming and friendly, and organised a number of trips for us; the first a walk around the rice fields and monkey forest, and the second an overnight stay on Gili Condo. In addition, we also rented their scooter and drove around following a hand drawn map by Thomas. We thoroughly enjoyed our stay, and would not hesitate to recommend Les Rizieres.

This review is the subjective opinion of a TripAdvisor member and not of TripAdvisor LLC.
View more reviews
PreviousNext
1…8910…28