Superb meal, delicious wine, attentive and helpful staff, & great for our 18month grandson who got a high chair and lots of attention. With a view across the river (obscured by pouring rain) this hotel is a favourite of friends and was better than our expectations. We shall return.

See all 204 reviews
Nearby Hotels 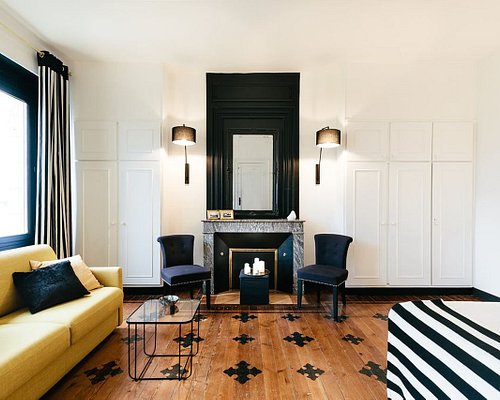 We spent two nights in this hotel and we're glad it wasn't longer. The hotel is located right on the Quai across from the river, which is its only redeeming feature. The carpet is worn, dirty with many cigarette holes. The place smells faintly musty and stale.
The room is tiny with only one small chair, and barely room to turn around. The spread on the bed doesn't look clean, nor does the blanket. The sheets were crisp and clean, however. The shower is small and awkward...perhaps it is a water saving scheme because you sure would not linger in this shower! No hairdryer in the bathroom, but one was provided on request. The wireless internet connection is tenuous and intermittent. We were in a room at the end of the hallway and the only way we could get connection that didn't drop off was to sit on one of the two hard chairs in the hotel lobby.
My harshest criticism, however is for the desk clerk. He had to be the least helpful hotel person we have ever encountered. After finding our reservation, he just handed us a key and pointed behind himself to where we could find the elevator. He failed to ask if we wanted more than one key AND didn't point out that, printed on the key, was a code that you needed to get in the front door at night. My husband stood outside for quite some time until someone else came along and let him in.
Unfortunately, there are not many choices in this town. But you should know what you're getting if you decide to book here.

This review is the subjective opinion of a TripAdvisor member and not of TripAdvisor LLC.
Adrien_DS
London, United Kingdom
176
Reviewed October 29, 2016
Beautiful harbor views

My room was rather small and simple, but with a balcony I could walk out onto and view the marina, with beautiful sunset and sunrise over the river. Made for an excellent stay.

Also bike friendly with back gate for easy cycling in and out once checked in.

This review is the subjective opinion of a TripAdvisor member and not of TripAdvisor LLC.
Hal C
Calgary
134
Reviewed September 25, 2016
Poor place

This was our first night of a 6 day cycling trip picked by the tour company. The room itself was OK, clean but a bit tired. However, the staff were very indifferent, not very friendly and had to be pressed to provide any help. The dinner that night was part of the package, as was the breakfast. The dinner had to be picked from 2 items and we weren't allowed to pick from the menu. The meal was disgusting, so much so that we couldn't even eat it. And we weren't the only ones who just walked out or found their meal extremely poor, even if they picked from the menu. The service was awful and we would never, ever recommend this place. A huge disappointment but our trip was rescued by the rest of the week and the other hotels we traveled to.

This review is the subjective opinion of a TripAdvisor member and not of TripAdvisor LLC.
Evening_bell
Ireland
145
Reviewed September 13, 2016
Decent value for a short stay

We stayed for 2 nights. This hotel is good value, compared to others in the area.

We cycled there - they have a secured garden area where one can park bicycles, and it feels very safe.
The rooms themselves are in a motel style, with a common balcony leading to each one. Ours smelled a little like smoke when we entered first - that didn't bother us, but ask ahead if it would concern you.
The downside for me: no air conditioning and no easy way of naturally ventilating the room - only a fan. You could open the window but I would not recommend doing so if asleep as it's directly beside the door, and the way in which the window opens makes it possible for any would-be intruder to simply put their hand in and unlock the door. (Sure it feels safe but I'm not about to leave a window open to prove a point!). So, the upshot is, the room is closed, it's very warm (>35 degrees in August) and there is a fan, but it has limitations. Not so much fun if you're trying to acclimatise.

The shower is good - high pressure but can occasionally 'spray' a little.
Decor fine - could do with a wardrobe instead of a curtained alcove, but no issues otherwise. We were on the first floor, which I would recommend as it feels more private.

This review is the subjective opinion of a TripAdvisor member and not of TripAdvisor LLC.
JesperKrarup
Virum, Denmark
6143
Reviewed September 13, 2016
Cosy hotel on the Quai

Perfect location for a trip to the wonderfull region of Medoc.
Rigth in the center on the Quai in Pauillac. A city in the center of the great areas of Medoc.
Nice and spacy rooms with all needs covered and a big terrace with excellent serving of lunch and dinner.

This review is the subjective opinion of a TripAdvisor member and not of TripAdvisor LLC.
View more reviews
PreviousNext
1…345…34