eDreams
Booking.com
StayForLong
View all 5 deals
Prices are the average nightly price provided by our partners and may not include all taxes and fees. Taxes and fees that are shown are estimates only. Please see our partners for more details.
355einarl
Ghatkopar, India
22

Incredibly unprofessional, breaks the agreement and cheep in any ways

In the afternoon the day after we ask when we could change rooms. Then the message was that those who had the big room wanted to rent it longer and that we could not get it anymore. That is, they broke our agreement and entered into a new agreement with those who had the room.

As a result, we had to find a new place to live. In addition, they would not refund all the remaining nights and charged us for 2 nights, even though they broke the deal and we only stayed there for 1 night. In short - theft

In the room there was no soap, little toilet paper left and only small towels to dry hands.

At this hotel, which is NOT a hotel, ALL expenses is kept to a minimum, and it seems that she who run the place have little or no expertise in the subject.

There are many lodging options in the area. Stay away from this.More

Show less
Room tip: Our room (21) was very noisy with loud music from the bars.
See all 8 reviews
Nearby Hotels 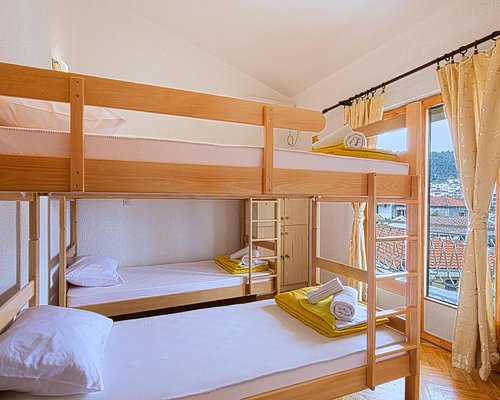 When we arrived, there was much confusion over which room we were to have despite showing them a booking.com confirmation that included the details. The room we originally given seemed like the very worst one--tiny, no view nor windows. I asked to be put in a room more like what we'd booked, and it caused a big commotion. There isn't really a reception desk, nor is it clear who works there or who is in charge. Once in a better room, we paid in cash (€45), and then I noticed how loud the hotel was--slamming doors, banging around furniture, everything echoing a lot. It was ok overnight but resumed promptly at 8am the next morning. Also, the lock on our door was old and stuck, and took forever to get unstuck--same with one of the knobs on our shower (which had sand from a previous user in the basin).

Breakfast (€4 Euros pp) was pretty good, and the location and view can't be beat). Wifi worked well too. Just needs a much more professional atmosphere for me to feel comfortable recommending.