Beach flat with character - Spacious flat in front of the beach

“Beach flat with character”
NzhaXzZfOUlh
other travelers have booked this property

Review of Spacious flat in front of the beach 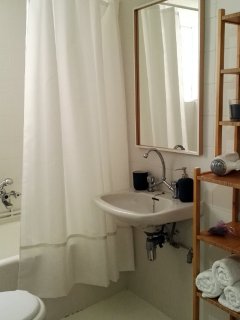 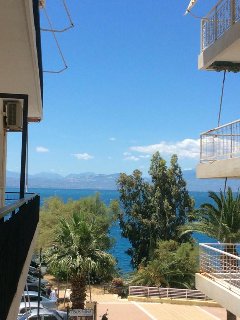 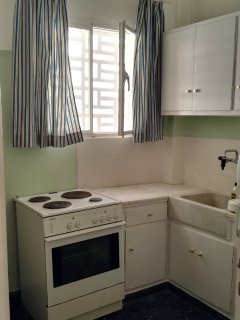 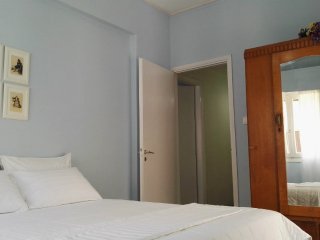 Very good - based on 6 reviews
Write a Review

Very pleased with the location, we could wake up and go for a swim without a second thought. The flat has character and some personal touch from the host, who is availble to give tips, where to eat, swim and sites to visit. very helpful

Date of stay: September 2016
Your age range 35-49
Would you recommend this hotel to a friend?   Yes.
Was this review helpful? Yes
This review is the subjective opinion of a Tripadvisor member and not of Tripadvisor LLC.
Problem with this review? Thank you. We appreciate your input.

Based on the numerous posted positive reviews, we had booked to stay at this holiday rental in late July 2015 for about 3 weeks. However, the apartment was not found to be as portrayed, which made us abandon it in less than 10 hours of occupancy. First, we arrived at midnight after a long trip where we were directed, by the owner, to fetch the keys from his friend in a souvlaki restaurant, a fair distance away midtown, which took an hour to get hold of. On top of that we had to locate the service closet to turn on the electricity and the water for the apartment, something that the owner should have taken care of upfront. When we finally entered the apartment and turned on the lights, we were shocked at how filthy it was. The 2 chairs in the living room were completely soaked in dust, and the kitchen had breadcrumbs, old pasta, rusted pans, and a constantly dripping faucet. However, this did not compare to the condition of the bathroom. There were shampoo bottles left from the previous tenants, the garbage was not emptied and the toilet would not flush and would continuously run. On top of the dirt, the apartment was advertised as having air conditioning, however this was only available in the living room and not in any of the bedrooms. There also was no table and chairs to seat 4 people, as advertised. There was no option to stay elsewhere as it was so late in the night. To make matters worse, we didn't get any sleep as we found out the rocks in front of the doors were the only way of keeping the doors from opening. It was a similar issue with the windows. After a trying night, we contacted the owner first thing in the morning to let him know the apartment wasn’t in livable condition, especially without a functional toilet, that we sought a hotel. He advised us to hold onto the keys and he would pick them up 3 days later. We finally met him and he acknowledged the issues with the apartment but refused to refund us any money placing all the blame on a lady he hired to clean the apartment. We have no luck so far in getting our money refunded back. We surely got taken big time, especially by the posted questionable timely positive reviews, and the well crafted excuses and correspondence. Be wise and don’t fall into the same trap.

Date of stay: July 2015
Liked best: Leaving
Liked least: The Apartment
Traveling group: Extended Family
Would you recommend this hotel to a friend?   No.
Was this review helpful? Yes
This review is the subjective opinion of a Tripadvisor member and not of Tripadvisor LLC.
Dear guest,
All your questions have been discussed, resolved and you eventually agreed by you that the flat was as per the description and with many extras you did not expect. Nevertheless, I personally contacted HolidayLettings / Tripadvisor who advised that there was no complain made by you. At a later day and after you left the flat, you requested a refund through Holiday Lettings, which was of a surprise. Once again Holiday Lettings confirmed that you were not entitled to any refund.

So what is the purpose of this review?

For sake of good order the flat has brand new cutlery, coffee maker etc. The flat is equipped with luxury Egyptian cotton linen, towels, aromatic candles and everything else as per the photos and the description. Pebbles are there to keep the doors wide open. Salt, pepper, olive oil, etc were there so that you wouldn’t have to buy new. Same applies to the sealed pasta package and the brand new shampoo. May I remind you that the lady with the keys had to change work shifts to stay up until 03:00 in the morning to assist you and make sure you enter safe and happy the flat, as per our pre-arrangement. She was also there twice for any request you may had at your first day, but she wasn’t let in the flat. All these happened without any complain.

Please remember that this is a family holiday flat for rent, not a professional hotel, but still we try every year to become better and be as good as the profesionals.
This response is the subjective opinion of the management representative and not of TripAdvisor LLC.
Problem with this review? Thank you. We appreciate your input.

13 helpful votes
“Only recommended if you have little need for comfort”
Reviewed August 25, 2015 for a stay in August 2015

If your expectations of a holiday rental are not very high and you have very little need for comfort you could choose this appartment. It is not to expensive, you have a roof over your head and the and the location is surely not bad.
But notice that:
There is no airconditioning (or fan) in the sleeping rooms so it gets very hot. There is little furniture - e.g. no dining table - and little closet space. All the furniture there is, is very (very) old. It is smelly and the appartment was not well cleaned. Parking is problematic. Kitchen is very old, not clean and ill equiped.

Date of stay: August 2015
Traveling group: Young Children
Would you recommend this hotel to a friend?   No.
Was this review helpful? Yes
This review is the subjective opinion of a Tripadvisor member and not of Tripadvisor LLC.
Dear guest,

The flat has been given to you FRESHLY cleaned, exactly as described, as per photos, with air conditioning that covers the ENTIRE flat, dining table that sits 4 people, THREE closets - 2 of which are wall to wall in length -, brand new mattress, brand new LUXURY cotton linen and brand new luxury towels (with spare sets so that you wouldn’t have to wash anything during your holidays), new pots / new forks / new knives / etc and freshly cleaned the same day.

Even though every season we upgrade the flat to reach the standards of a hotel, still it is not a hotel yet and that is why the price was euro 65 per night to sleep 4 people, instead of Euro 130 per night at the next door hotel.

Nevertheless, you were offered two extra brand new fans, at no extra cost and offered the cleaning lady to be at your disposal at any given time you wished, again at no extra cost, simply because we wanted you to feel comfortable.

As to the parking issue, whether a visitor stays at this flat or a hotel or any other place in Loutraki, the parking is the same in the entire town, in fact this flat is better positioned than many others, as there are two public car parks next to the flat, one right next to the flat and the other one at 3 minutes walk. In the peak of the summer parking may be limited on some days, such as weekends and it will require few minutes of patient and good spirits, and eventually one will find a slot.

Have a good day
This response is the subjective opinion of the management representative and not of TripAdvisor LLC.
Problem with this review? Thank you. We appreciate your input.

It was very nice to wake up in the fresh bright sunrays of the bed room. we could have our breakfast at the balcony and hit the road to visit the area. if we were lazy, we would simply dive at the beach in front of the building or the very long beach right next to it and then return at our flat for a fresh salad. the kitchen had pretty much all we needed. Another very nice point were the linen, they were so luxurious, it felt perfect

Date of stay: June 2014
Liked best: well light flat, good location, nice linen
Liked least: it could use some renovation, but the value for money is ideal
Traveling group: Spouse/Partner
Your age range 50-64
Would you recommend this hotel to a friend?   Yes.
Recommended for:
Was this review helpful? Yes
This review is the subjective opinion of a Tripadvisor member and not of Tripadvisor LLC.
Thank you for visiting and also thank you for leaving the flat in such an excellent condition. Hope to see you again some time in the future
This response is the subjective opinion of the management representative and not of TripAdvisor LLC.
Problem with this review? Thank you. We appreciate your input.

Athens, Greece
Reviewed January 19, 2015 for a stay in September 2014
1
person found this review helpful
Date of stay: September 2014
Liked best: The location
Liked least: Parking is difficult, same as all over Loutraki though
Traveling group: Young Children
Your age range 35-49
Would you recommend this hotel to a friend?   Yes.
Recommended for:
Was this review helpful? Yes
This review is the subjective opinion of an individual traveler and not of Tripadvisor LLC nor of its partners. Tripadvisor performs checks on reviews.
I'm glad you enjoyed. The fact that is sunny, its my favourite feature of the flat as well, it feels like your heart is wide open
This response is the subjective opinion of the management representative and not of TripAdvisor LLC nor of its partners.
Problem with this review? Thank you. We appreciate your input.

1
person found this review helpful
Date of stay: September 2014
Your age range 25-34
Would you recommend this hotel to a friend?   Yes.
Was this review helpful? Yes
This review is the subjective opinion of a Tripadvisor member and not of Tripadvisor LLC.
Χαίρομαι που περάσατε καλά και που σας γνωρίσαμε. Ελπίζω να τα πούμε πάλι συντομα
This response is the subjective opinion of the management representative and not of TripAdvisor LLC.
Problem with this review? Thank you. We appreciate your input.
Updating list...
Do you own a vacation rental? List it here.

Looking for a place to stay in Loutraki?
View all 73 vacation rentals