$69
$51
View deal
Free cancellation until 12/19/21
Hotels.com$69
Priceline$59
Travelocity$69
View all 14 deals
Prices are the average nightly price provided by our partners and may not include all taxes and fees. Taxes and fees that are shown are estimates only. Please see our partners for more details.
Marian B
Liverpool, United Kingdom
257118

This could be a lovely hotel the room was comfortable but furnishings now a little tired. The room and balcony needs some TLC restaurant furniture also needs painting or tidying. Breakfast is ok but there is limited choice.There are no safes in room or safety deposit box at reception either which is a minus too. However the view from our balcony was amazing, the beach was lovely and the sea very warm.

Room tip: A sea view room is the best. No twin rooms so if you need 2 beds you have to book duplex bungalow, beware ladder to upstairs is steep and bed just mattress on floor.
See all 117 reviews
Nearby Hotels 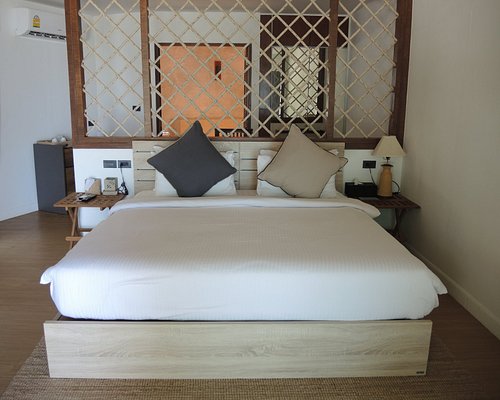 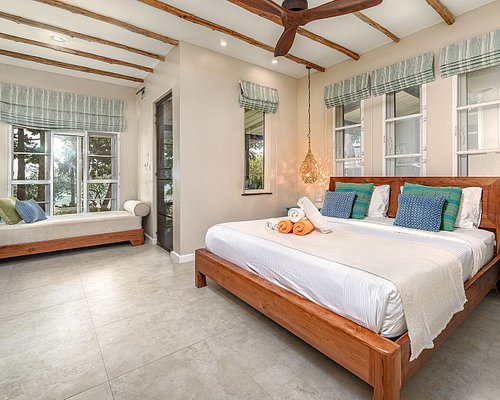 Booked superior room as needed twinbeds. The room clean and looed out to sea. Duplex means up steep ladder with matress on floor. Duplex floor had its own air conditioning which was new and effective. Light switch at opposite end to bed.
Balcony furnirure and dining furniture in need of some T.L.C. No safes in room or at reception.
Staff will transport luggage across sand to taxi rank. Breakfast average.
Sun loungers in need of cushions but pleasant to sit on jetty and look out to sea.
Maid service late in day. Very hard matresses.

This review is the subjective opinion of a Tripadvisor member and not of TripAdvisor LLC.
JayantRenee
Dehradun
32
Reviewed July 17, 2012
Superior Rooms?????

In spite of sending an e-mail to arrange transfers from Bangkok we got no response and it is not exactly easy to get there. While other hotels on this beach have their own ferries this place gave us no help or information about getting there. The last bit involves a long and arduous trek with luggage which is pretty difficult as it involves trying to drag your baggage through loose dry sand. The staff though helpful when goaded is not forthcoming. A tad overpriced for what they offer. We had what they call superior rooms, and still wonder what they were superior to?
We must however say that in spite of all this we had a pleasant stay here.

Room tip: If you stay here make sure you get the sea facing bungalows. Though overpriced they are the only rooms that would offer you some value for your money.
Ask JayantRenee about Vimarn Samed Resort
1  Thank JayantRenee

This review is the subjective opinion of a Tripadvisor member and not of TripAdvisor LLC.
Movever
Melbourne
43
Reviewed April 5, 2012
Fair location. Service needs more improvement.

Stayed in superior sea view building for 2 nights, glad with this decision as our room is at the end of the building, top floor with a great sea view (from bed and balcony) and quite private. Hard mattress but got extra padding on the top for better sleep. Shower area is very awkward (opposite sink with no curtain). Something wrong with tap as water just dribbled out (no point to complain as don't think they can fix it soon enough and we didn't wanna move to another room).
Room was fairly clean. There were a line of ant parading near the front door searching for food in the room.
Room decor still looks fairly new, plenty of lighting options.
Wi-fi signal ok in some areas, in our room was weak and disappeared often.

Service really needs to improve. On our floor there was only one small clothes hanger provided and it was already taken. I walked down myself to the reception area where most of their staff were gathering there in preparation to close the restaurant for the day as there was no more customers. The answer was there is only one hanger on the floor and nowhere else, the owner did not buy enough for every room. Next morning I noticed that there were plenty provided individually at their superior twin house rooms (room cost only $5-$10 more and not very private) which were also vacant overnight! They could not be bother!
Breakfast (buffet) is served till 9.30 but you may find there is not much left even if you come down at 9am as their staff may start to collect some of the foods even though there are still some guests that arrived earlier hanging around and enjoying their breakfast.(During our stay, at least half of the resort’s rooms were occupied.) When we asked, one of the staff gave a signal to the other staff to bring the food back.
We had dinner with them on our first night. A few dishes were not available. Apparently their restaurant does not get many customers (I found out the reason myself eventually) so don’t expect to order any freshly caught seafood.
One of our dishes was spicy and sour steamed squid, pretty disappointed as it was not cooked all the way through, needed to ask to get it cooked more. When it came back, it looked cooked but the accompaniments were now dry and overcooked, and we were even more surprised when we found a dead insect on the last piece of squid! We paid and let the in-charge staff member know before we left. His sudden excuse after a quick examination was that it was a mosquito and it could have happened at the table but absolutely not from the kitchen as it was not a fly…!
By the way, I also speak Thai so communication with their staff was not a problem.
Overall, it is ok to stay there for a couple of days and don’t expect much of their service and food. There are many nearby resorts and restaurants along the beach that you can also try.

This review is the subjective opinion of a Tripadvisor member and not of TripAdvisor LLC.
DaynaThomas
New York City, New York
3339
Reviewed March 1, 2012
Private bungalow at the end of the bay

After a full day of travel with an overnight through Bangkok, we just wanted to relax on the beach and didn't expect much of this hotel. Though the trip to this beach by truck is easy from the ferry, the 500m walk with bags across the beach is a bit arduous. But after all that, Vimarn Samed was more than a pleasant surprise. The private Thai style bungalow with a 'garden view' was exotic, clean and simple with a partial view of the water. A full Thai and western breakfast was included and had an incredibly impressive selection. The rear pier was a great vantage point at dawn and the rocky end of shore made us feel as if we were on our own private resort even though we were 2 minutes walk from the beach.

This review is the subjective opinion of a Tripadvisor member and not of TripAdvisor LLC.
pacena1
Bangkok, Thailand
13
Reviewed January 24, 2012
Average Resort. Poor Service.

Booked 3 nights with Vimarn and confirmed via phone. 2 nights before we arrived, the hotel told us we would have to switch rooms because another couple wanted to extend their stay. They were also extremely misleading with regards to transportation from the mainland. We gave them our estimated time of arrival and were told it would be 300-350 bhat per person for a speedboat. When we arrived that night and called the hotel from the mainland, the price suddenly jumped to 2000 bhat. Luckily, we were able to split the ride with another couple (this was not a translation error - my partner speaks Thai).

The resort itself is situated on a very beautiful rocky point with great views of the nearby beach. Our room was clean but the bed was ridiculously uncomfortable. The free breakfast was quite bland, even by Koh Samed standards.

The following morning, when we were about to leave for the day, we asked the management about having to switch rooms. They told my partner that we no longer had to leave. Unfortunately, when I returned several hours later, that story had changed and they demanded we move our things immediately. We packed our bags and found another resort that was less expensive, had nicer staff, and a better breakfast.

Too bad. I would be willing to forgive the uncomfortable bed but the service was very poor.