Aeolos Studios & Suites
Lowest prices for your stay
Lock in the lowest price from these sites
$221
Reserve now, pay at stay
View deal
Hotels.com$221
Expedia.com$221
Travelocity$221
eDreams$221
Orbitz.com$221
Priceline$221
View all 14 deals
Prices are the average nightly price provided by our partners and may not include all taxes and fees. Taxes and fees that are shown are estimates only. Please see our partners for more details.
DineshKanti
13

My wife and I had read all of the reviews of Aeolos studios & suites and came in with high expectations and a lot of excitement.The location of the suites is more than we expected.Breathtaking views and beautiful accommodations.
Great hospitality by Dennis and Julian Wich are friendly, knowledgeable,and professional.They were very helpful with information about the island.
We were served Greek breakfast on our balcony every morning.The only thing I would change is-a longer stay!

Trip type: Traveled as a couple
See all 274 reviews
Nearby Hotels 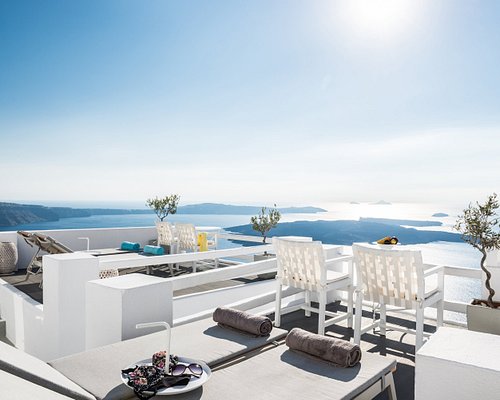 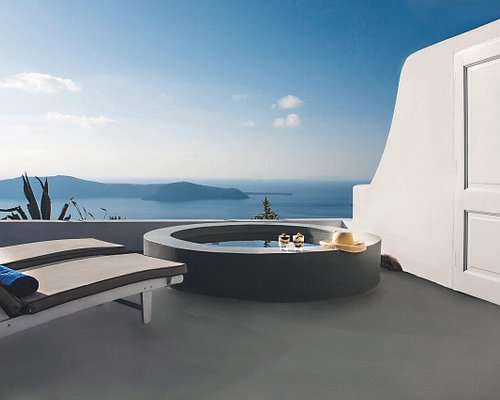 This place is awesome! I have visited santorini 3 times before, but aeolos in imerovigli is the most amazing place i ever stayed in the island. Beautiful views, excellent room,comfortable bed, and huge jacuzzi facing the volcano. The breakfast was very tasty and filling. I loved the Greek yougurt with honey served in small mason jars! The staff was friendly and willing to help and chat. Everything was very clean and shiny. Also the last night i joined the Greek BBQ snacks and it was very nice to enjoy a free plate of souvlaki and tzatziki with a chilled glass of strawberry sparkling wine enjoying the sunset. I highly recommend this place.

This review is the subjective opinion of a TripAdvisor member and not of TripAdvisor LLC.
DaveMason75
12
Reviewed May 31, 2017 via mobile
Amazing stay

We stayed at Aeolos during May for a week,and it was more amazing than I expected.Our room was lovely and super clean,our balcony had an extraordinary view at the breathtaking volcano and the sea.If you want to stay in a boutique,quiet hotel this is the place for you!The staff was very kind and helpful. Every second day during sunset time the hotel offers complimentary Greek BBQ snack's and drinks to every guest,it was a very nice moment,we tasted some greek souvlaki and we met some guests from the room nearby to ours.I am definitely going to visit you again, and I will recommend you to all of my friends.Thank you for this amazing experience

This review is the subjective opinion of a TripAdvisor member and not of TripAdvisor LLC.
Aliza O
Philadelphia, Pennsylvania
32
Reviewed May 22, 2017
Terrible room

My husband and I stayed at this hotel last week, and were very disappointed. This review is mostly regarding the room itself that we stayed in, the Calypso. This should not be hotel room, period. They were clearly trying to fit a room where there is not enough space. In order to do so, they created a loft space, where the downstairs area has an entryway, a bath tub, and a bathroom. There is no separate shower, the only option for showering is a handheld used in the bath. The ceiling downstairs is not high enough for a normal size person to lift their hands over their head (to take off clothes for instance). It is very cramped. The upstairs is even worse, this is where the bed is. I am 5'8", and had to walk to the bed completely bent over. My husband is 6'8", and this was nearly impossible for him.
In addition to the room being too small in general, it was just not nice. The sheets were gross and smelled, and the comforter was so old and disgusting I had to remove it from the bed. The bed itself was uncomfortable, and had the worst pillows I have ever used.
We were actually glad that we were stuck in Crete an extra day and only had to stay at the hotel 2 nights.
We had complimentary breakfast, which was ok, but I believe they did not have a full kitchen and microwaved the eggs.
The staff was very friendly and lovely.

This review is the subjective opinion of a TripAdvisor member and not of TripAdvisor LLC.
daniellet210
2912
Reviewed May 9, 2017 via mobile
Worst Hotel Experience and Service!! AVOID AVOID

This was by far he worst hotel I have ever stayed at. Don't let online photos fool you.
I stayed at the Aeolos Studio and Suites this past weekend for a friends birthday. From Arrival to Departure we couldn't wait to leave this hotel. As we arrived, we were looking for a reception area then a man came out and said there is no reception area and he would help us. The room seemed nice at first but then when night time came around we realized the sheets were damp and wet as well as the towels. We noticed they were drying their sheets outside and it was cold. Its obvious they will not dry and we all got sick on this trip. Also, the shower was unpleasant. It was so inconvenient not to have a shower head and have to hold it up with one hand. The employees also need to be aware of things going on. We scheduled a pick up for the following day to the airport and one of the employees failed to inform his colleague that we had scheduled the pick up.

This review is the subjective opinion of a TripAdvisor member and not of TripAdvisor LLC.
Affan K
13
Reviewed May 4, 2017 via mobile
Amazing visit

For anyone want to have a good time at Santorini i will recommend this place to giv u great hospitality by Dennis and Julian. Staff was very welcoming and nice always there to help u. Dennis guided us about places to visit.

This review is the subjective opinion of a TripAdvisor member and not of TripAdvisor LLC.
View more reviews
PreviousNext
1…8910…