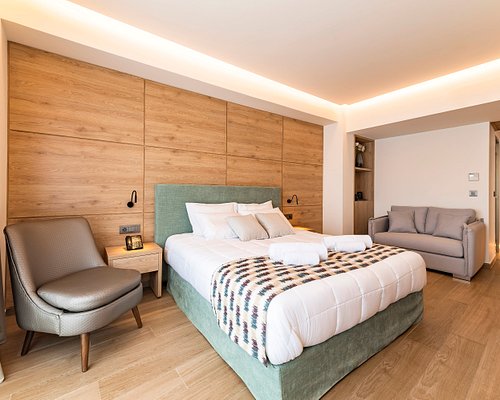 I just got back from a one week trip to Rhodos with my husband and a couple of friends. At first i wasn't sure what to expect from this hotel given the reviews i read before leaving but trust me, it's really nice. We stayed on the 4th floor, so I don't know what to say about other rooms in the hotel but ours were great. The rooms were clean, had a fridge, tv, enough space and most importantly AC (for free). Yes, the bathroom is kind of small, but since I don't live in a palace back at home, I found it to be just enough for a one week stay. We arrived Friday night, so until Monday the cleaning staff didn't change the towels, but we had enough to use anyway. The reception area is quite nice, the staff speak English and other languages like Italian or Spanish. Also in the lobby the wifi works pretty well. The pool is nice, I think it was clean, plenty of chairs because not many people use it... I mean if you're in Greece known for its awesome beaches why would you stay at a common pool you could find at home... We were on a BB basis, so I can only speak of breakfast, which was ok, enough food by my standards and good. You could choose between scrambled eggs, boiled eggs, small sausages, pastries, beans, vegies, feta and yogurt of course, salami, bacon, sweets etc, which seems ok considering the fact that most people eat with a fork and not a shovel and are not sumo wrestlers; if you're used to 30 specialties of breakfast foods at home then this is not the best choice for you, but since I don't stuff my fridge at home with 10 varieties of cheeses, 15 types of meats, somon fume or caviar, the scrambled eggs were good enough for my humble taste. Also I don't get why people complain about the breakfast at Lomeniz, 'cause from what I saw everybody had at least 2 full plated in front of them... yeah the food was bad and not enough that's why everyone was eating like it was the last meal of their lives. Some people were actually shoving to beat you in the race for the last croissant on earth. (not meant to be funny ... ok, maybe just a little bit)
Yes, the hotel is not the center of the city but you can easily get there in a 15 min walk on Kanada Street, there are some shops nearby and some taverns. I don't really recommend the taverns near the hotel on the seaside, cheap but not so good, try to get closer to the center. FYI, pretty much everything closes from 2 to 4 so don't even bother. The beach near the hotel (Zefyros) may not seem great at a first glance but the water is very clean and crystal clear, seemed to me better the beaches on the western part of town which had strong waves and small rocks making it hard to walk to the water or try to swim in it.
We rented a car for 2 days from the port, a peugeot 107, small but very efficient, we made over 300 km with at only paid like 30 euros for the gas and the rental was 40 euros a day, no credit card, no guarantee, just the money for the key. We went around the island, saw the butterflies valley which is amazing, stopped at a tavern on the beach in the middle of nowhere, with the best food we had all week, saw monolithos (not really worth it, but if you're there you may as well climb up the stairs and take some pictures) and of course Lindos, the small typical white greek small town with really narrow alleys and there you can visit the acropoles inside the medieval city walls. We also took a ferry to Symi island, but it was a very hot day and couldn't visit that much on it because the sun was just burning my skin off.
All in all, a great vacation, in a good hotel. Seriously people, if you expect luxury then don't be cheap - stay in a 5* hotel, but for a 3* Lomeniz is excellent.

This review is the subjective opinion of a TripAdvisor member and not of TripAdvisor LLC.
Andy H
London, England, United Kingdom
3027
Reviewed September 1, 2012
excellent hotel

i cant work out all the negatively about this place, its a fantastic hotel, lovely food and no chips to be seen just excellent, something for everyone, hotel very very clean and chic,ok its away from the old town and the area its in could be better but hay your in rhodes, what i heard people moaning about, mainly older people, was the food i think they were looking for a roast dinner and chips lol, great selection of food and really lovely Greek food, and air con free.

This review is the subjective opinion of a TripAdvisor member and not of TripAdvisor LLC.
Laima B
Klaipeda, Lithuania
72
Reviewed August 19, 2012
Great hotel

Spent a week at this hotel and couldn't say anything bad about it. The staff were always helpful and polite, everything was clean and nice, sheets and towels were changed every day for us. Even though you had to cross the road to get to the beach, it was quite nice and also had sunbeds. The city center is just about 20mins walk from the hotel, so that's not that far. The food was very good even though the breakfast menu was almost the same every morning, but dinners were always different and tasty. Of course, there were no labels by the plates, but you can just ask and cafe workers will tell you what's where.
The swimming pool is quite big and there is a lot of space and sunbeds by it.
I can't agree with the opinion that this hotel is not suitable for young people as there were quite a lot of them.
The wifi in the hotel lobby was not always working, but that's not such a big problem. If you are lucky to get rooms in the first floor, you might even catch wifi in your balcony.
The only inconvenience was that there where quite a lot of Greeks and they can get very loud even at night. But despite that I'd definitely stay there again .

Ask Laima B about Lomeniz Hotel
1  Thank Laima B

This review is the subjective opinion of a TripAdvisor member and not of TripAdvisor LLC.
experiencedtravelIer
Stockholm, Sweden
920
Reviewed August 12, 2012 via mobile
Deserves more credit

Me and my girlfriend just got back home after a weeks vacation at Lomeniz. We were in Rhodos to enjoy the sun and to relax and for that Lomeniz was a great hotel. It was close to the beach which was great. Just a 1 minute walk from the hotel and it was a large and okey beach. I little rocky in some places but otherwise good. There was two showers with clean water and a little cafe where you could buy ice cream and drinks. The location of the hotel gets a 2,5/5 because it's was a 15-20 min walk to the old town but If you are two people walking it seems like 5 minutes and on the way you pass a big supermarket where you can but almost anything you like. We walked to and from the old town every day and there was never any problems. The hotel itself was good value for the money, the staff was nice and we never had any problem with the being rude. We only had breakfast at the hotel but that was good not very much to choose from but you never had to leave there hungry. The rooms were big and the balcony as well. But of you can choose, take a room with a view of the ocean and preferably on the 3rd or 4th floor. The pool are at the hotel was good, clean and normal. But there was to few sunbeds but if you get there before 10 there was never any problem. I would recommend this hotel to people who come to Rhodos to enjoy the sun but of you come to Rhodos to party, choose a hotel in the city because this was a little to far away.

This review is the subjective opinion of a TripAdvisor member and not of TripAdvisor LLC.
Irina Z
Bucharest, Romania
715
Reviewed August 2, 2012
good budget option in the capital of the island

Clean, renovated inside, but not outside,huge balcony,you have to cross the street for the beach which is public, not very accesorised, rocky in the water-you need special shoes.
Location in a residential area, in the periffery of the city; you can walk till the Old town 20 min.
Breakfast buffet not a big choice, but dinner buffet very good.

This review is the subjective opinion of a TripAdvisor member and not of TripAdvisor LLC.
View more reviews
PreviousNext
1…192021…88