Excellent location in Perissa close to shops, beach and plenty of restaurants. There's a small number of villas which keeps it a peaceful location. We stayed in villa 9 which was a large family apartment right onto the pool with a large terrace area. It is family run and Markos is very helpful to advise on Santorini, transport and tours. The apartment is fairly basic and the bathrooms are compact, but it is air conditioned and cleaned everyday, a very friendly environment.

See all 163 reviews
Nearby Hotels 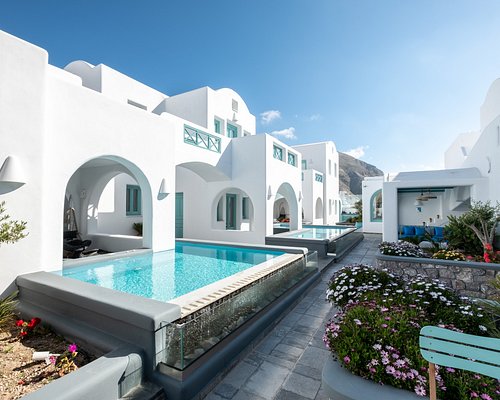 Not a very good stay at the Anezina. Broken patio furniture, tv didn't work, no electrical sockets for appliances, rusty pans and mismatch crockery and cutlery, kettle couldn't be used full of limescale, shower dribbled salty water with no wall fixing and curtains to short causing the bathroom floor to flood. Wi-Fi very temperamental. These was the last villa out of four that we stayed in on this trip we were very disappointed as the other three were similarly described in advertisement and were much better, it wouldn't take much effort or cost to bring them up to standard . The building looks lovely, traditional and clean from the outside I think we were given the worst room. Avoid Room 5 ... Expected better in Santorini

This review is the subjective opinion of a TripAdvisor member and not of TripAdvisor LLC.
YMDandSRS
Blunham, United Kingdom
1715
Reviewed October 7, 2017
Perfect holiday

Our fifth stay at Anezina and, as always, perfect. First time booking direct and all worked well. Transfer to and from the airport was great. Rooms cleaned every day. A few nice touches this year - dressing gowns (which are whiter than white!) and slippers. Upgraded kitchen areas and some bathroom units all finished off well. We had Room 10 (for the parents) and Room 8 for ourselves and both were up to standard. Very happy customers and already booked for next June. Big thank you to Marcos and family for making our stay as enjoyable as ever.

Room tip: Rooms 8 to 11 are the apartments around the pool each with their own patio area overlooking the pool area.
Ask YMDandSRS about Anezina Villas
1  Thank YMDandSRS

This review is the subjective opinion of a TripAdvisor member and not of TripAdvisor LLC.
359natasan
Utrecht, The Netherlands
137
Reviewed July 14, 2017
Really friendly staff!

We had a great time at Anezina Villas! It's perfectly located in Perisa and just a short walk away from the beach. The room was big (but simple), the pool area was perfect for relaxing, and last but not least the people working there were great! Markos was always there to answer our questions, help us plan our trips and figure out which buses to take.

This review is the subjective opinion of a TripAdvisor member and not of TripAdvisor LLC.
joeZ9999OE
County Wicklow, Ireland
12
Reviewed July 11, 2017
Ripped Off

My girlfriend booked a seven night stay at this premises but we were subsequently forced to change our travel plans. We gave the hotel almost two months notice that we would not be able to make the dates but they took the full cost of the stay out of my bank account and adamantly refused to refund it despite the length of notice they were given and the fact that the booking was for August, a period when they would undoubtedly re-book the room without any difficulty. They then cut off all contact so I would advise anyone considering the hotel to beware when dealing with unscrupulous individuals who essentially take people's money without any redress.

This review is the subjective opinion of a TripAdvisor member and not of TripAdvisor LLC.
Arnoud_dpyj
Utrecht, The Netherlands
183
Reviewed June 30, 2017
Good prices

Anezina Villas had everything we needed: a cool airconditioned room, friendly and helpful manager (thank you Markos) and an awesome pool. Across from Anezina's is a small supermarket, the rest (bakery, ATM's, local bus stops, restaurants - notable mentions being Demi's Bistro and Dorians Bar - as well as the beach) are all in walking distance (1 to 3 minutes). Prices were also very reasonable, which is why we picked Anezina's in the first place.

This review is the subjective opinion of a TripAdvisor member and not of TripAdvisor LLC.
View more reviews
PreviousNext
1234…28