$77
$52
View deal
Hotels.com
Travelocity
Priceline$77
View all 14 deals
Prices above are provided by partners for one room, with variable occupancy rules as provided by the property, and do not include all taxes and fees. Please see our partners for full details.
slysam
Ardrossan, United Kingdom
355

The best place to stay in Malia if you don't mind a walk, but that walk gets you best views over Malia to the Mediterranean sea, the staff and owners could not do enough for you, helping us getting cheaper taxi's to the ferry and recommending place to visit and keeping the bar open a little later when we turned up at closing time.

See all 326 reviews
Nearby Hotels 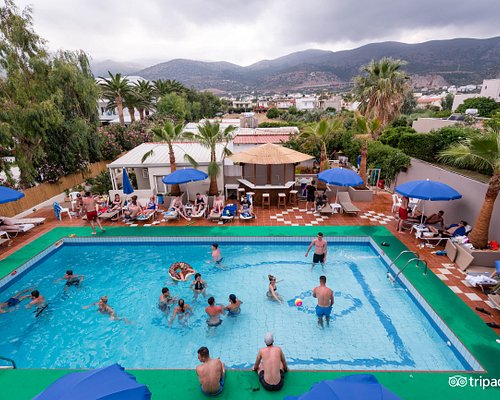 Set in the mountains and very peaceful. We were a party of 6, we had 3 sea view apartments all of which were well maintained. Cleaners did a great job every day. Plenty of eateries within walking distance. Staff were all very helpful. Have a great stay.

This review is the subjective opinion of a TripAdvisor member and not of TripAdvisor LLC.
pstetler
Bremerhaven, Germany
2
Reviewed May 29, 2019
Simply great!

Everything was terrific! A big thank you to all of the staff for the personal touch. Although we arrrived late because of flight delays, they kept the kitchen open and greeted us with warm hearts. And this continued until we left. The warm goodbye's make us look forward to our next visit!

This review is the subjective opinion of a TripAdvisor member and not of TripAdvisor LLC.
wackytraveller5
Dorking, United Kingdom
3026
Reviewed December 30, 2018 via mobile
A little gem!

Went to this hotel a few years ago. Such a warm and inviting atmosphere. The owner has time for everyone and is such a friendly lady. It does help that some of the staff are British so you don't have to worry about language barriers. There are some amazing views of the sea from the balcony's. There are two cats that live in the grounds too called mare and Monte. They are cute little things. If you ever get to meet them they love cheese! Will definitely come back one day.

This review is the subjective opinion of a TripAdvisor member and not of TripAdvisor LLC.
Marina_Scotland
Forres, United Kingdom
2224
Reviewed December 1, 2018
Incredibly cosy hotel and fantastic staff

Thoughtful - that’s a word to describe this nice apart hotel. It was an impression that its managers tried to predict all wishes of their guests. There is an international team: General manager Koula who is a Greek (originally from Cyprus), a perfect chef Olga (originally from Kiev, Ukraine), a careful cleaner Rosa (originally from Tbilisi, Georgia) and a barman Amanda who is English. Mare Monte means sea and mountains. It was built near mountains with sea view. So it would be better to have a car to get a sandy beech because there is about 20 min walk. As alternative to sea there is a very nice swimming pool just in bar&restaurant area. I had a nice time in Mare Monte and hope to return there again and again!

This review is the subjective opinion of a TripAdvisor member and not of TripAdvisor LLC.
Karmen M
Bremen, Germany
11
Reviewed November 25, 2018 via mobile
View on Mare and Monte

Spent a late holiday in November 2018. Really nice, quiet and lovely place and super nice hotel staff. Highly recommend. A bit outside of the town noise with the view over hills and sea. Just perfect. Cat friendly place.

This review is the subjective opinion of a TripAdvisor member and not of TripAdvisor LLC.
View more reviews
PreviousNext
1234…