$23
$15
View deal
Free cancellation until 10/30/21
Prices are the average nightly price provided by our partners and may not include all taxes and fees. Taxes and fees that are shown are estimates only. Please see our partners for more details.
RobynIsAllOver
Phoenix, Arizona
2112

Stayed here with my man in one room, my Mom in one room, and a friend in a 3rd room. Wont get in too much detail, because it was the middle of low season and we were a late minute late walk-in, so perhaps there was not enough time to prepare for guests, but I had to request a bottle of Bug killer spray and attack lots of creatures in all 3 rooms. Other than that, the pricing was great for an AC room (800 Baht, about $26 USD), the location was good and close to the little shops and restaurants around, and we got a good nights sleep. The on site dogs were sweet, and I used the swing both on the beach (swing for 2!), and in front of our bungalow (#1). On a side note: Across the street and down 2 doors is a souvenir shop with the sweetest lady who owns it, and I will come back to this side of the island to shop with her again, for sure. Next door to her a family owns a really great restaurant with all kinds of food (Thai, BBQ, Italian) and all 4 of us had a really terrific meal (not just saying that because there was nothing else open, but i live in Thailand and the food was fantastic) and a great time there.More

Show less
Room tip: #1, closest to the beach and you can hear the waves.
See all 80 reviews
Nearby Hotels 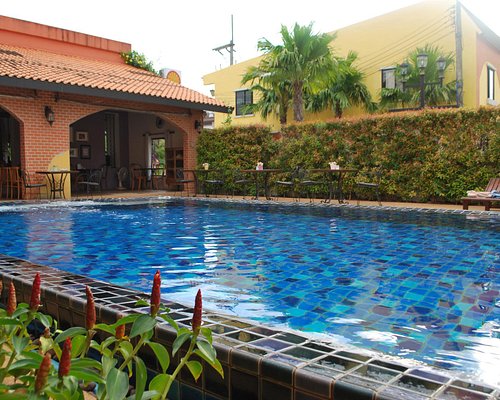 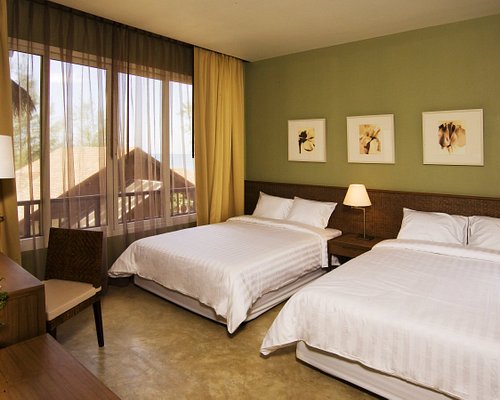 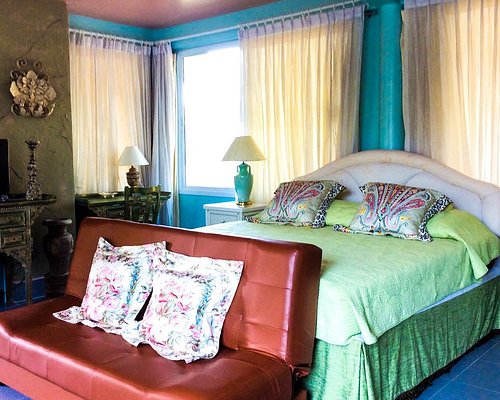 Baan Koh Mak is a very good guest house on a nice section of beach on a beautiful little tropical island near the Cambodian border. The staff are friendly, helpful, and able, and they made us feel very comfortable. The food is brilliant in the restaurant too! One thing that was a bit difficult for us was that our room was near the back of the resort, and this meant the dogs and the bikes going passed on the road early in the morning woke us up, but this is just a small complaint really and we had a really good time there. We went snorkelling, and hired a moped to explore the island, and Baan Koh Mak organised that as well as onward travel to Koh Kood. The snorkelling was good for fish, but all the coral was dead, which is a real shame, especially as the water is some of the clearest I've seen in S E Asia. When we rode round the island we only saw one other place we thought was prettier than where we were staying but we didnt stay there... all in all, very good!

Good place and I'd definitely give it a try if you're going to Koh Mak!

Room tip: Get a room near to the sea.
Ask naishjacob about Baan Koh Mak
2  Thank naishjacob

This review is the subjective opinion of a Tripadvisor member and not of TripAdvisor LLC.
KatieL346
London, England, United Kingdom
10153
Reviewed February 4, 2012
Wonderful island, great location

Koh Mak is a small island with dirt track. We Booked prior to arrival as we were advised many places can be fully booked. We walked to Baan Koh Mak, and were pleased to find it in the more busy area of the island (by that I mean there were three restaurants and a couple of shops nearby off the main dirt road). The hotel was situated on the beachfront, with the huts set back a few metres onto a pretty grassy area. Rooms were basic but new, clean and quirky. The walls were dark, and the shower was great. Air con worked well.

The huts looked straight towards the sea, and either had a hammock or swing outside which was a nice touch.

The only downside to the huts were that three of walls were windows which were very nice with relation to views, but these windows were covered by thin curtains. These were nice and clean, but very thin and as a result, you could be seen inside if you had the light on. Not so good when getting changed. We overcame this by covering the light in the room with something thin, to dim it, and leaving the outside light on - after much investigation, you could no longer be seen.

The resort, as it turns out, was probably the best situated along that side of the island. We wandered up and down, and whereas other places may have had better restuarant facilities, Baan Koh Mak, had the nicest stretch of beach. (Plus, there was nothing to stop you eating at these places in the evening).

As for the food, prices were (as expected) a little higher than mainland, but a good variety of Thai and Western. I asked for glass noodle salad and the staff said 'Thai spicy?' - and it certainly was! The next time I had it there were even more chillis on it, but it was great. I would say, the butter there seems to be a horrible sweet tasking type. A couple of things we ordered including the scrambled eggs and garlic bread tasted a bit odd (and not really so nice)because of this. A jaffle is a toased sandwich (cheese or ham). Cocktails were a bit more expensive, but not bad. And they serve buckets of Sangsom, over even just a busket of ice, if you want to make your own up.

Staff really were very friendly, and constantly cleaning and tidying up (I'm not sure they ever slept them selves though). There are also a number of better maintained dogs here. A highlight is watching them jump about in the water looking for ?crabs.

The water is warm, clean and soft, and is very calm. And palm trees stretch for miles. You can hire a kayak or snorkels on an hourly or daily basis from the staff. I would reccommend the kayak; you can probably make it all the way round the island in a day.

There is not much else to do on Koh Mak...but thats kind of the point.

This place is much more reasonably priced than a lot on the island, and is well worth it.

Room tip: Book before arrival, I believe it gets booked up quickly.
Ask KatieL346 about Baan Koh Mak
1  Thank KatieL346

This review is the subjective opinion of a Tripadvisor member and not of TripAdvisor LLC.
Mario S
Dusseldorf, Germany
11
Reviewed February 2, 2012
lousy place

This review is the subjective opinion of a Tripadvisor member and not of TripAdvisor LLC.
BizS
Oxford, United Kingdom
43
Reviewed January 11, 2012
Excellent stay at Baan Koh Mak

Baan Koh Mak is a fantastic place to stay. Located right on the beach, which was always cleaned by the hotel staff and has lovely calm seas (I really don't have any complaints at all about the cleanliness of the beach or the sea, which was palm fringed and turquoise), the resort consists of 18 cabins set around a small well maintained garden, leading on to the beach cafe and the beach beyond. The cafe is excellent - quite smartly done up, nice and shaded with a through breeze, an excellent menu and delicious thai and western food. The staff at Baan Koh Mak are absolutely excellent - always smartly turned out and ready with a smile. The resort seems very well run by the management. The only slight downside is that the rooms/cabins are really quite small and the bathrooms fairly simple although perfectly functional and clean. The a/c was good and the bed fantastic - a big kingsize mattress set on a raised platform which was very comfy, but there wasn't a huge amount of space around it. However who wants to spend time in their room when the beach is right there?! Location was good, in the main bit of the island, so you can walk to other places to eat and drink and little shops for some variety. It also seems to be one of the cheaper places to stay on the island so I thought it was very good value for money. We were there over the peak season at new year and the resort and beach were never overcrowded, in fact it was a excellent place to chill out. There were people about, and a delicious buffet and fire display put on for New Year, so there was a good atmosphere but not too crowded - best of both worlds! I recommend it highly, we loved it.

This review is the subjective opinion of a Tripadvisor member and not of TripAdvisor LLC.
Griggly
Melbourne
32
Reviewed January 1, 2012
SUCH A GREAT PLACE TO STAY!

We loved Baan Koh Mak! The service is great. The people are friendly AND FUNNY! We felt like part of the family there. The rooms are great, they have upgraded apparently so I'd suggest ignoring any reviews that say the rooms are no good. They are simple and quirky! The bathroom is nice, hot showers too! Even the beach is one of the better ones we came across on Koh Mak. I would stay here and only here next time I go to Koh Mak. We didn't find the sand flies a problem, just the thought of them and knowing how bad the bites are is very off putting. Coconut oil and bushman's repellent seems to work a charm, I also read detol mixed with baby oil or coconut oil works well too! A huge plus is the dogs, one in particular Farsi! All the dogs are pure bred or mixed retrievers and they are healthy and loving, they really add to the experience!! The food is also great, all very fresh and flavoursome! And if you feel like a change there are restaurants not far from the resort, 2 min walk! Stay here!

This review is the subjective opinion of a Tripadvisor member and not of TripAdvisor LLC.
View more reviews
PreviousNext
1…567…
<script type='t