$361
$313
View deal
Free cancellation until 06/02/22
Hotels.com$335
Priceline$335
travelup.com$361
View all 22 deals
Prices are the average nightly price provided by our partners and may not include all taxes and fees. Taxes and fees that are shown are estimates only. Please see our partners for more details.
rcmjr
2079

I found this to be an interesting hotel, but my room was bizzare. The room itself was huge, but the bathroom was very tiny. The tub even appeared to have been custom built for such a small space. One problem with the large room was that the bed was on the opposite side from the TV without anything in between - just a strage set up. It is almost as if they took what ever space they had and built a hotel room in it.

This is an average hotel - nothing special. For the right price, I would stay here again, but it would not be my first choice.
More 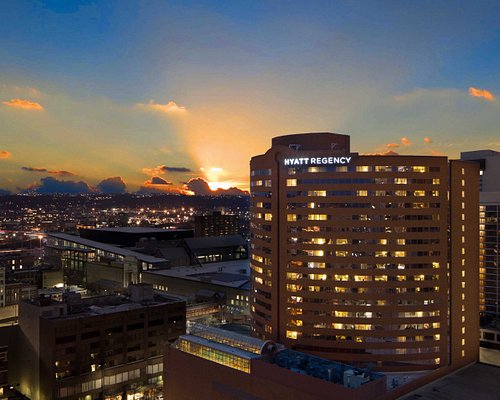 I recently stayed one night at the Hilton. I was here for a business trip. The hotel is lovely and I would definitely reccomend it. The room was big and clean. The bed was great and I loved the pillows. I did not have a car and found the attached shopping mall with a food court to be a big plus so I didnt have to order room service.

I booked on hotwire so I got about $60. off the regular price.

This review is the subjective opinion of a Tripadvisor member and not of TripAdvisor LLC.
furryriverrat
WV
15
Reviewed November 5, 2006
I liked it when I checked in, I loved it by the time I checked out.

Our room was very nice, although I was a bit disappointed when I found that the internet charge was ten bucks a day. I also cringed at the 15 dollar parking fee when I booked. (You may guess that I am a small town cheapskate, you are right.) USE the valet. It is only 3 bucks more and allows you to come and go as you please.

It would have been a nice stay, and that is it until I started walking around the next moring, prior to my wife waking up. TJ Mobilio, the "guest service supervisor" was showing some guy around the place and I asked to tag along. TJ is 30 something and loves this hotel and is incredibly knowledgable about it and it's archetechture. From the hand ingraved elevator doors, to the hand sculpted plaster work, to the room where the first indoor ice rink was to the grand egyptian style fountain, to the marble and the brazillian rosewood panels. TJ spent about 30 minutes finishing the tour for the other gentleman and I asked if he would be able to spend some time showing my wife and I around later. He said he would try and make time. Rather than impose on him, I started showing my wife around trying to remember as much as I could and TJ saw us and started the tour from the beginning again. He told us how the hotel was built in 1931 with the proceeds of the stock the builder got by selling the shares that were payment for building the Empire state building and the Rockefeller center after the banks refused financing for his concept of a hotel where one could sleep, eat and shop for a week without ever going outside.

Seldom have I met a hotel employee as knowlegeable and helpful as TJ. Not surprising that with a leader like TJ, everyone else in the hotel was nice, helpful and respectful, however, he took what would have been a pleasant stay into a memorable experience.

This review is the subjective opinion of a Tripadvisor member and not of TripAdvisor LLC.
smercury
Holladay, Utah
3068
Reviewed November 4, 2006
Just okay

This hotel has old-fashioned glamour, but lacked the comfort I would normally associate with Hilton. My main complaint was the bed: it was hard and not very comfortable. The room was clean, and I did not see any obvious evidence of wear-and-tear. The bathroom was small, but workable. My only complaints there were a burned-out bulb and the public restroom-style flusher.

I did appreciate the valet service, as I arrived late at night. $18 is a little bit pricey, but it was worth it.

I can't complain about the price, since I got it for a steal on Priceline ($59), so it was overall excellent value for the money, but I wouldn't imagine paying full price.

This review is the subjective opinion of a Tripadvisor member and not of TripAdvisor LLC.
schnauzerlady
Southeast US
56285
Reviewed September 22, 2006
A Wonderful New Life!

My cousin and Iattended a convention held at the Netherland. An added allure was that Cincinnati was her hometown and as a teen she had attended many proms and other events at the hotel.

The redo is absolutely excellent -- and I was viewing it with a pro!

We had read the tripadvisor.com reviews and were a bit worried about the parking. However, because of our event discount, the valet parking cost less than the self park, so we decided to take a chance. Calling ahead to the number on our ticket, we had absolutely no problems getting our car in a timely fashion.

The elevators are a bit slow -- rather than being "dedicated" to a specific set of floors, each goes to all floors. However, one just learns to factor this in. The only time we found it to be a problem was at check-out: doors opened and we were faced with an elevator full of people and luggage.

It took us five passes before we were able to squeeze in: the lower your floor, the more time you should allow. And, it's not the people, it's the luggage: remember that when the hotel was built, no guest would have considered hauling his or her own bags!

Because I am a gold-level Hilton Honors member, we were given concierge privileges. There was a very nice continental breakfast each morning; in the evening, there were very hearty appetizers and reasonably priced drinks ($5 for a glass of wine ... and that included tax and tip). The Lounge also had computers with internet access, several wide-screen TVs, and complimentary newspapers.

The group dinners were acceptable for convention food; and, again, were quite reasonably priced for this type of affair. The meeting rooms were very nice; and the staff was very accommodating.

Our room was lovely -- the bath was a bit small but it had been redone in the original style of the hotel, so we didn't mind. The water was hot and the towels were soft (in fact, all the linens were super).

My only complaint was with the Hilton central reservations service. I could not book through the internet because the service did not recognize my event code. I called the 800 number and made my reservation; however, when I got internet confirmation, I found I had been given a queen bed (I was never given a choice but had said that we were now one but might be two .. the clerk apparently assumed that the two of us were a couple when, in fact, we are female cousins). When my cousin indicated that she was indeed coming, I immediately called and was told that I should order a roll-away, at an additional charge of $30 per night; I placed a provisional request and called the hotel directly.

The hotel told me they could not give me a guarantee of two beds but would note it on my reservation. I am happy to say we were accommodated -- but I feel strongly that when I first called I should have been asked for my preference. This was, of course, not the fault of the hotel.

All in all, staying at the Netherland was a treat -- if you're going to Cincinnati, don't pass this by.

This review is the subjective opinion of a Tripadvisor member and not of TripAdvisor LLC.
ChgoAtty
Chicago, IL
13123
Reviewed September 13, 2006
Great bed, clean rooms, but...

We are a couple in our mid-30s, and we stayed here for a wedding recently. We are well-traveled, but not snooty (we've stayed in every place from 1-star to 5-star places).

Pros: The lobby is beautiful with its art deco style. The front desk clerks were very helpful and friendly. Check-in was easy. Brunch at the Palms Court is tasty, albeit small. The hotel is in a primo location - across the street is Macy's and Saks in case you need a last-minute dress, gift, or tie. You're in walking distance from the sports stadiums and you're in the heart of downtown. There's even a mall in the lower level of the hotel. Very convenient. The bathrooms are very clean with Crabtree & Evelyn bath products. The bed is awesome - we had a king bed with a nice striped comforter, and it was very comfortable. The A/C ran well, and no problems technically. Alarm clock was nifty and even had an MP3 hookup.

Cons: Slow like molasses elevators, thin walls (we could hear everything our neighbors said), night construction noises (who does construction at 3 am?), tiny standard rooms (the suites with 2 queen beds are gigantic, however), closets were tiny, too - not a lot of storage space. If you're in a room near the elevator, you can always hear the BING! when the door opens. On wedding weekends, elevators take a long time, valet takes 45 minutes to an hour, crowds of people horde the lobby, and people run screaming up and down the hallways drunk at 3-4 am. Hotel needs to take better control of loud, unruly guests. I didn't sleep at all that night.

It's not a bad place. For location and a good bed and clean room (if you don't care about it being tiny), it's primo. For a place to relax and feel pampered, not really. If you stay here when it's not overrun with people attending a softball tourney or multiple wedding, it might actually be a great place to stay.

This review is the subjective opinion of a Tripadvisor member and not of TripAdvisor LLC.
View more reviews
PreviousNext
1…536537538…