$342
$259
Free cancellation until 10/30/21
Reserve now, pay at stay
View deal
Booking.com$259
Hotels.com$259
Hyatt.com$259
travelup.com$342
eDreams$259
Agoda.com$259
View all 18 deals
Prices are the average nightly price provided by our partners and may not include all taxes and fees. Taxes and fees that are shown are estimates only. Please see our partners for more details.
kalvey01
28

The hotel has bed bugs!!!

This hotel was the worst decision we could have made!! They stole my back pack the first day we arrived!! We had to make a police report’ it was never returned. They gave us ocean view when we payed for ocean front. Then wouldn’t give us the price difference in refund or change the room! Two days later my pregnant sister wakes up with bed bug bite covering her legs an stomach! They still wouldn’t give us a refund! So needless to say we paid for two hotels the weeks we came thanks to the Hyatt Regency. The staff are rude an not caring at all. By far the worst place to stay on the entire island!!!More

Thank you for providing this informative review. We understand from our management team that they contacted you and provided assistance with your lost item and comfort and care during your stay. The safety of our guests and the cleanliness of our resort is of the utmost importance to us. Can you contact our Director of Rooms, Mr. Donald Kim at Donald.Kim@Hyatt.com, so we may further assist with any concerns. We look forward to hearing from you soon.

Report response as inappropriateThank you. We appreciate your input.
This response is the subjective opinion of the management representative and not of TripAdvisor LLC.
See all 7,550 reviews
Nearby Hotels 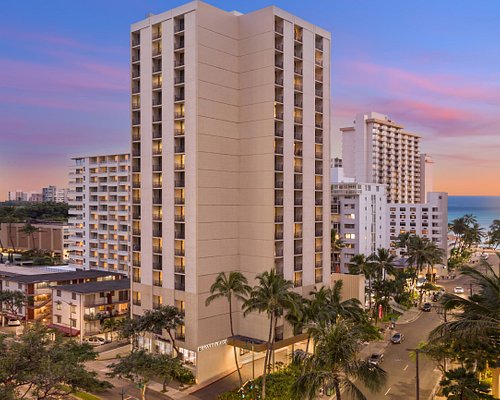 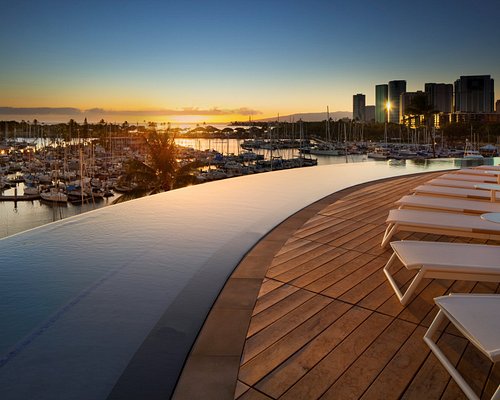 We stayed at this hotel for a weekend getaway. I wanted to write a good view of this hotel, and it does have some positives--rooms are larger than average for Waikiki, and the shower is really nice. Housekeeping was great. However, that's where the good things end. We were informed on Saturday morning that the only pool and hot tub area would be closed at 3:00 that afternoon for a wedding; when I called the hotel operator to ask when it would be reopened, she stated it would be closed the rest of the evening. When I asked if other Hyatt pools would be made available to guests of if something else was available, I was told "just the ocean across the street."

After reviewing older reviews of the hotel, I thought perhaps the game room with the pool tables available for Japanese tourist bureau groups might be available; however, when we called to front desk to ask we were told no pool tables were available. When we asked them what amenities would be available to entertain kids, they recommended the game room, which is literally a tiny room of board games.

The location of the hotel is awkward. The parking garage is across the street and tiny--several time while trying to go up or down it I would have to stop and back up if a F150 or similar sized truck was coming up the ramp; there is simply not enough space. The elevators were still under repair while we were there, so wait times were a bit long. When the pool is open, it's ok--a bit small for the number of guests, and whoever was working Friday night was draconian about kicking everyone out at 9:00. The hot tub was nicer and large. There's a bar right next to it that had live music, which was a nice touch. The only downside to the pool location is that you have to walk by a nice restaurant in the hotel to get to it--since the hotel does not provide robes, be sure to bring your own.

There is a lot of potential to this hotel, but making amenities available to limited numbers of guests limit for far it can go.

Thank you for sharing these invaluable insights with us. Though we are proud to learn that you found your room amenities particularly enjoyable, we are equally disappointed to learn that your overall visit did not surpass your initial expectations. Your feedback is vital in our improvement as a resort and we truly appreciate you taking the time to share your review with us. We hope you’ll allow us the opportunity to offer you five-star stay in the future.

Report response as inappropriateThank you. We appreciate your input.
This response is the subjective opinion of the management representative and not of TripAdvisor LLC.
ishelli
Rathmines, Australia
10281
Reviewed September 27, 2019 via mobile
Excellent location and amazing views

Celebrated my 50th birthday here. Perfect location to enjoy Waikiki, across the road from the beach and the Duke statue which is a pick up point for most tours and a pink line trolley stop. Try and get breakfast included in your stay, as it is absolutely amazing with an incredible selection of foods and an awesome egg station. I will definitely return to the Hyatt.

A very happy birthday from the entire Hyatt Regency Waikiki ohana! We are honored that you chose to share your special day with us, and we are thrilled to learn that your stay was one to remember. We look forward to celebrating future milestones with you again soon.

Report response as inappropriateThank you. We appreciate your input.
This response is the subjective opinion of the management representative and not of TripAdvisor LLC.
starspangledmom
Louisville, Kentucky
48
Reviewed September 27, 2019
Navigating this hotel is a nightmare!

We were shuttled from the cruise port and dropped off on a side street. No ramps, no one to assist, no idea where to go. This hotel is inside a mall area that is being renovated. Even people who had been staying there for days said they couldn’t find their way around. And the elevator doesn’t go to the street level even after waiting forever to get one! Check out the Westin across the street!

Review collected in partnership with Hyatt Hotels
This business uses tools provided by Tripadvisor (or one of its official Review Collection Partners) to encourage and collect guest reviews, including this one.
Ask starspangledmom about Hyatt Regency Waikiki Beach Resort And Spa
2  Thank starspangledmom

Mahalo for this thoughtful feedback. Currently our Great Hall Atrium is undergoing an exterior façade maintenance project. However, all shops and restaurants are open. We are also under a state required elevator modernization project, which may have caused the longer wait times for the elevators during peak hours. We apologize for the inconvenience this caused during your stay. Please know that we’ve noted all elements of your review and will share them with our management teams. We would like to regain your trust during your next Waikiki vacation.

Report response as inappropriateThank you. We appreciate your input.
This response is the subjective opinion of the management representative and not of TripAdvisor LLC.
julieT8193AO
Australia
12
Reviewed September 27, 2019
A great view and great service at the Hyatt Regency in Waikiki

We had the perfect check in experience at the Hyatt. That was the beginning of our trip. Yay! The rooms were clean and beautiful. We had flowers layed out on our bed and by our drinks and in the bathroom. Soooo pretty! The service was amazing, the view was spectacular and the convenience of the location was perfect. We were assisted with tours, with how to take advantage of the local transportation (busses) and the service was all around spectacular. Thank you for making our Hawaian trip such an amazing success!

Review collected in partnership with Hyatt Hotels
This business uses tools provided by Tripadvisor (or one of its official Review Collection Partners) to encourage and collect guest reviews, including this one.
Ask julieT8193AO about Hyatt Regency Waikiki Beach Resort And Spa
2  Thank julieT8193AO

We are thrilled to learn of your five-star stay in paradise! It is wonderful to learn that you adored our scenic views, thoughtful accommodations, and team’s genuine aloha spirit. Thank you so much for sharing your experiences and we look forward to hosting you again in the near future.

Report response as inappropriateThank you. We appreciate your input.
This response is the subjective opinion of the management representative and not of TripAdvisor LLC.
bgodbo5
San Antonio, Texas
511
Reviewed September 26, 2019
Hyatt Regency at Waikiki

Spent 9 nights on Waikiki, everything was spot on. Doing a bit of renovation, but nothing to noisy or unattractive. Still having elevator problems, but longest wait was only 5 minutes. Location is great, view was outstanding and staff went out of way to be affable and serving.

Review collected in partnership with Hyatt Hotels
This business uses tools provided by Tripadvisor (or one of its official Review Collection Partners) to encourage and collect guest reviews, including this one.
Ask bgodbo5 about Hyatt Regency Waikiki Beach Resort And Spa
2  Thank bgodbo5

It is wonderful to hear about your impressive experience at our island paradise. We appreciate your patience as we complete a state required elevator modernization project. We are also excited that you found our prime location and dedicated team’s considerate service to be highlights of your trip. Everyone here at Hyatt Regency Waikiki Beach Resort looks forward to the opportunity of welcoming you back.

Report response as inappropriateThank you. We appreciate your input.
This response is the subjective opinion of the management representative and not of TripAdvisor LLC.
View more reviews
PreviousNext
1…106107108…