Hilton Waikiki Beach
Hilton Waikiki Beach
Lowest prices for your stay
Lock in the lowest price from these sites
$320
$218
View deal
Expedia.com$303
Hilton$303
Hotels.com$218
Priceline$218
Orbitz.com$303
travelup.com$320
View all 23 deals
Prices are the average nightly price provided by our partners and may not include all taxes and fees. Taxes and fees that are shown are estimates only. Please see our partners for more details.
dani8952
Orange County, California
5826

The front desk staff is not very helpful or nice. I had several issues during my stay and no one was very helpful to try to resolve them for me. The hotel is a bit run down and need repairs. The rooms are kind of dirty also. The drain didn't drain properly. Prices are very high.More

I do not read this type of review very often.
I would very much like to continue the conversation.
My email is erich.smith@hiltonwaikikihotel.com
I need to find out how I can fix this.
I am sorry.

Report response as inappropriateThank you. We appreciate your input.
This response is the subjective opinion of the management representative and not of TripAdvisor LLC.
See all 5,594 reviews
Nearby Hotels 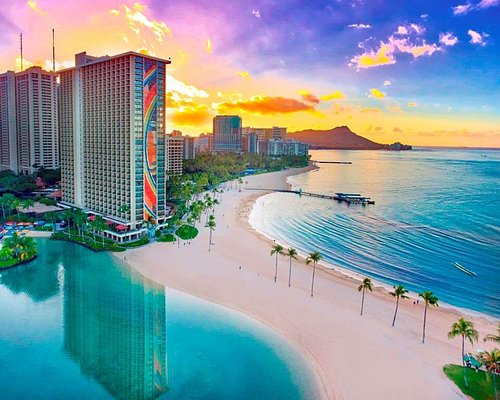 - Staff at the hotel are extremely helpful & friendly.
- Rooms are clean & have all the necessary facilities
- Great location!
- Hotel is well equipped with facilities such as restaurant, bar, fitness centre, pool

Review collected in partnership with Hilton Hotels & Resorts
This business uses tools provided by Tripadvisor (or one of its official Review Collection Partners) to encourage and collect guest reviews, including this one.
Ask Ant028 about Hilton Waikiki Beach
2  Thank Ant028

Report response as inappropriateThank you. We appreciate your input.
This response is the subjective opinion of the management representative and not of TripAdvisor LLC.
Randall R
Guam, Mariana Islands
83
Reviewed September 9, 2016
Meh - Disappointed

I just wasn't impressed. For the Hilton brand, I expected more from the room, and my wife and I didn't feel comfortable. The room was cramped (especially the bathroom) and there were only two double beds available when we would have preferred a king. My wife and I had a couple of weeks in Honolulu, and I was there for work, so we wanted to be in a place where we could spend some time and feel relaxed.

Not a big deal, but when we entered the room, the first thing we discovered was a towel lying on the floor... details. The room itself had a dingy look to it and didn't smell fresh - it smelled almost musty.

The layout of the room didn't allow for much open space - there was barely room for the two beds. There was a mini-fridge in the room which was totally out of place, and looked like something you would buy at a flea market.

The bureau under the TV (which was a very nice LG wide screen) was old and worn, and had pretty small drawers on either side. When the middle door was opened it had an unfinished look and there were't any shelves to store anything.

The corridor leading to the elevators was very warm and felt like there was no air conditioning. The main areas of the hotel were generally crowded with people... I understand it's Waikiki and there are lots of people there, but this hotel lacked intimacy.

The staff were very friendly and professional... Before we decided to checkout of the hotel and move to another down the street, they offered to relocate us to another room, but we didn't bother because it would've been the same size so we didn't see the point. I appreciate that they tried to accommodate us.

The parking arrangement was horrible... only valet parking and $30 per day!! The wait was unpredictable, although they tried to get your car down pretty quick.

The check-out revealed that the few local calls I made were $1.00 each - and I'm a Hilton Honors member. I would expect complimentary local calls... pretty crummy but I guess I should have read the fine print.

I realize my review is lacking specifics and pictures... I just wanted to share my experience.

This review is the subjective opinion of a Tripadvisor member and not of TripAdvisor LLC.
matbee1
Australia
86
Reviewed September 8, 2016 via mobile
Really beautiful!

I honestly can not stop raving about how great this hotel is. I ended up staying in this hotel with a sea view room for 5 nights and I honestly was so relaxed and comfortable in that room. Sometimes laying on the couch looking at the sunset over the ocean from your room was a perfect way to end a day. It is a block away from Waikiki beach which is perfect!. Reason I say it is perfect is because it gets you away from the mountains of crowds that walk along that main road which can get old real quick if it's the first thing you walk out into from the hotels along the main road. The hotel is really modernly suited for Hawaii and you will notice that when you're there. You can also be sure they have comfortable beds with plenty of comfy pillows!. But what was great is that this hotel was in walking distance of everything, if you walk about 300 meters left of the hotel you end up at Honolulu Zoo, the beach is one block away, shopping and restaurants are all around the corner. But what makes this hotel even more convenient is out the front is a stop for the Waikiki trolleys that can take you all the way to Alamoana shopping centre on the pink line (or you can get off at any stop along the way) for a cost of $2 each way. Plus all tours pick you up from the right hand side of the building where the green seat is, which you will find helpful knowing that I've told you that. If you're planning on going to the beach this hotel has you covered with guest being given beach towels to use from the machine down stairs next the elevators. I highly recommend staying here if you are stuck with where to go, plus I think this hotel is fairly price for the high quality you will get. You'll love it!

This review is the subjective opinion of a Tripadvisor member and not of TripAdvisor LLC.
hilag14
Melbourne, Australia
3926
Reviewed September 8, 2016
Friendly Staff, Great location

We stayed at the Hilton Waikiki Beach for 5 nights from the 25th-30th of August. Upon check in staff were very friendly and assisted us in calling the shuttle service who had dropped us off as we had left something in there and she promptly called them for us and our items were returned.
I checked in and chose our room through the Hilton App, and we were upgraded to the 16th Floor which had a great view from the Lanai. The room was not large but in no means was it too small either. The Lanai itself was tiny and not for those who are afraid of heights. The pool area was nice and quiet and had a great view from the rooftop.
House Keeping were efficient and our room was always tidy and well maintained. One downside was the Executive lounge, it was underground almost and the variety of food was lacking , Breakfast was ok however we found that the food didn't change in those 5 days too. Bell Staff were helpful in organising shuttles for us to the Waikele Premium outlets as well as to Pearl Harbour , one downside with the Pearl Harbour shuttle was that we weren't told it was going to the airport first and subsequently we missed our pre reserved tour at Pearl Harbour and had to wait an hour for the next one to start. We found that the Shuttle to the outlet's was cheaper than other companies too , it departs 3-4 times per day ( best to leave early) as there is lots to see whilst there. Overall a good stay in Waikiki and location was great with many great restaurants and shops in walking distance.

This review is the subjective opinion of a Tripadvisor member and not of TripAdvisor LLC.
lisadZ8134IL
Louisville, Kentucky
21
Reviewed September 7, 2016
Great place to stay!!!!!

Everything about this place was great! The staff was very friendly and went out of their way to make your stay a great one. The room was very impressive. The television was probably a 46 inch. Great location!!

Review collected in partnership with Hilton Hotels & Resorts
This business uses tools provided by Tripadvisor (or one of its official Review Collection Partners) to encourage and collect guest reviews, including this one.
Ask lisadZ8134IL about Hilton Waikiki Beach
Thank lisadZ8134IL

Report response as inappropriateThank you. We appreciate your input.
This response is the subjective opinion of the management representative and not of TripAdvisor LLC.
View more reviews
PreviousNext
1…291292293…