Charming in every way - La Fonda on the Plaza

La Fonda on the Plaza

$179
$125
View Deal
SAVE $54
Hotels.com$161
Expedia.com$161
Priceline$179
View all 16 deals
Prices are the average nightly price provided by our partners and may not include all taxes and fees. Taxes and fees that are shown are estimates only. Please see our partners for more details.
sfdann
Salt Lake City, Utah
838353

Charming in every way

Review of La Fonda on the Plaza
Reviewed November 16, 2019 via mobile

Not only is the location central to all of the town’s treasures, but it is a work of art itself. The guest room was beautiful with a separate sitting area, brand new bath, beautiful bath amenities and stunning television set. Loved the decor and the small refrigerator with plenty of icy water - so important in Santa Fe. Great meeting rooms and delicious catering including the beautiful La Plazuela restaurant. Kind check in and valet team and Patricia at concierge is a gift. Also loved the shops (especially Things Finer) and the French Bakery is so special. Views even from the first floor guest rooms are charming. And Carmen in housekeeping was brilliant. A truly spectacular stayMore 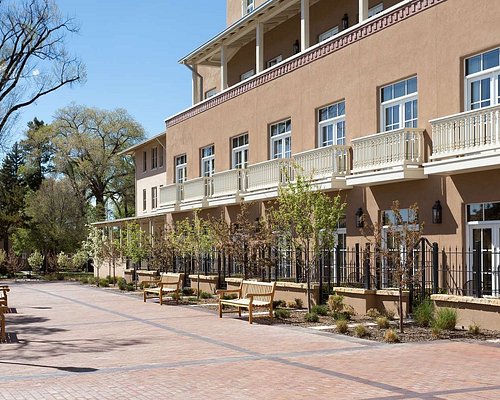 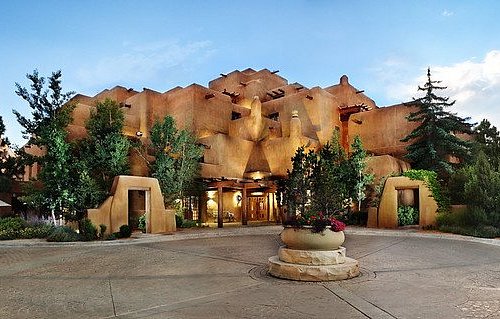 This old refurbished piece of history is an outstanding place to stay when visiting Santa Fe...the rooms are decent sized and clean. The staff are pleasant and very helpful. The location is super...right on the plaza and easy to get to/from when in Santa Fe. Definitely worth staying...we'll do it again.

Room tip: All rooms seem to be quiet...no complaints from any of our friends.
Ask Richard T about La Fonda on the Plaza
1  Thank Richard T

This review is the subjective opinion of a TripAdvisor member and not of TripAdvisor LLC.
Jennifer_ATC
San Diego, California
1
Reviewed November 15, 2019
Delightful

We had the most fun during our short visit to New Mexico and staying at La Fonda for the last night of our trip was absolutely the best idea. From check-in with delightful Kaycee to check-out, I could not have been happier with our choice to stay here. Our concierge (Moira and Dee) were a big help about where to shop and which restaurants to try and generally where to go and what it is like to live in Santa Fe. Our terrace suite was very comfortable and spacious. After driving for several hours and a stop at the Georgia O'Keeffe museum, we really appreciated the basket of bottled water and delicious locally made treats. I would definitely book here again.

This review is the subjective opinion of a TripAdvisor member and not of TripAdvisor LLC.
Kathleen T
Phoenix, United States
2035
Reviewed November 12, 2019
History and Comfort at La Fonda

Recently I stayed at the La Fonda hotel in Santa Fe, New Mexico. It is an historical building with fine art they have collected over the decades. It was interesting as well as very comfortable. The historical touches continued in my room making it a pleasant place to stay. The restaurant has very good breakfasts; I did not have dinner there. It is in a very convenient location, town center, and we walked everywhere. There are many interesting museums and churches nearby as well as art galleries and street vendors. Very lovely town and I hope to revisit it.

Room tip: I was there for a convention and we had a special rate. Not sure what normal is.
Ask Kathleen T about La Fonda on the Plaza
1  Thank Kathleen T

This review is the subjective opinion of a TripAdvisor member and not of TripAdvisor LLC.
santafeexpert
11
Reviewed November 8, 2019
A ghost of what it used to be...

The hotel is of interest only to those who never knew it before it changed hands. For the rest of us, the only thing left of its original charm is the architecture. What was once a unique and popular place is now a generic, asepticized shell devoid of warmth. Front desk staff—including the self-superior, opinionated concierge—come off as arrogant, sniffy, and unhelpful, unaware of their place and evidently of their own appearance. We will never again subject ourselves to the disaster this hotel has become.

Room tip: There are no good rooms, so the tip is don't bother trying to find one.
Ask santafeexpert about La Fonda on the Plaza
1  Thank santafeexpert

Dear "santafeexpert"...
I regret that La Fonda is no longer to your liking. If any business refuses to change and simply keeps on "doing what we always did" they will not be around for much longer.
In La Fonda's case, the decor that was added to the property in the 1960's and 1970's was certainly not in keeping with the long history of the works of Mary Colter, Fred Harvey and John Gaw Meem. When the new owners took over several years ago, extensive research was done regarding the original decor and style of La Fonda.
You may only have known the late 20th century La Fonda, what it is now is much more true to how it was built and decorated in the earlier 1900's. The NM History Museum has a fantastic exhibit on the Harvey Hotels, you should check it out.
You also must have missed several hundred pieces of original art that the hotel owns, as well as our free docent-led tours that tell the story of the renovations and the new artworks we add on a regular basis. That is unfortunate, as it may have given you a true understanding of La Fonda.
I will also make a point of explaining to our concierge exactly what his place is...
Regards,

Report response as inappropriateThank you. We appreciate your input.
This response is the subjective opinion of the management representative and not of TripAdvisor LLC.
TravellerMan_11
Santa Fe, New Mexico
45156
Reviewed November 5, 2019
La Fonda has changed

Having stayed at La Fonda many times I have to say that it has undergone a lot of changes since its long time owner passed away and his children sold it to two people from Texas. The charming unique bar and lounge is now looking like just about any hotel anywhere and the lobby in particular the front desk is the same, it could be in any hotel. Locals told me that they don't feel as welcome as they use to be which is unfortunate as that was the great thing is you could meet all types of interesting & colorful locals and learn some great history and tips on what to see.

This review is the subjective opinion of a TripAdvisor member and not of TripAdvisor LLC.
View more reviews
PreviousNext
1…192021…197