Review of Quality Inn & Suites Seattle
Reviewed May 2, 2019 via mobile

During our stay Tracy at the Front desk was amazing! She always had a genuine greeting, exceptional recommendations & she was kind with staff & guests. I saw her go that extra mile for everyone, everyday.

Gabriel the driver is knowledgeable, kind & gracious. The breakfast is much appreciated, a great variety, clean & kept stocked often by a wonderful blonde who is happy & on it! Housekeeping from the bottom up is helpful & kind always.

It is commendable so many fantastic people work in one spot. Thank you, we look forward to returning.

Trip type: Traveled with family
See all 1,179 reviews
Nearby Hotels 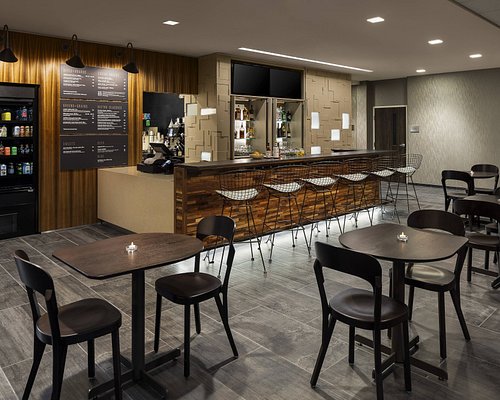 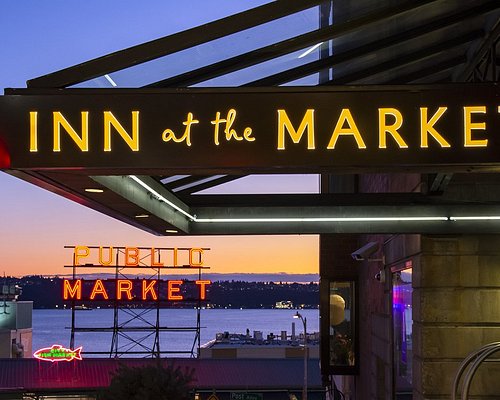 The hotel is located near many major attractions in downtown. We have never used any public transportation to see the nearby local attractions (1 mile radius).
The check in and out were smooth and quick and the reception guy and the stuff were friendly. The room was clean but dated. The view was to other neighbour hotel but it was less noisy.
Included in the price was a breakfast which was very consistent and delicious (different types of sausages, eggs, muffins, cookies, bagels, waffels, tea, coffee, different types of juices).
We recommend this hotel based on its location.

This review is the subjective opinion of a Tripadvisor member and not of TripAdvisor LLC.
FromAZtoPA
Bernville, Pennsylvania
8561
Reviewed April 19, 2019 via mobile
The staff here is AWESOME!

We spent 3 nights here on our trip to Seattle. Front desk clerk, Tracy was so kind and helpful...best front desk person we've met on our 6 week trip. She helped with a room upgrade, directions to local spots and even lent us an umbrella on a rainy day.❤
It is an older hotel, but sufficient for us as tourists. Overnight parking cost of $28 sounded steep at first, but we realized it's much more expensive everywhere else.

This review is the subjective opinion of a Tripadvisor member and not of TripAdvisor LLC.
carriew310
Davenport, United States
910
Reviewed April 16, 2019
Cannot recommend this property unfortunately

I travel quite a lot, and have used hotels as my "home away from home" for decades. I have NEVER had the amount of issues at one hotel during one trip as I had at this one. This trip to Seattle was my dream trip. I had been planning it for years until the opportunity came up this year to take it. I was excited! And I had an EXCELLENT time in Seattle - with the exception of the hotel stay.

The first issue happened when I arrived, late at night after traveling halfway across the country all day. According to the site I booked through, free parking was available on site. When I arrived, I was informed parking was $28 a day. On the property. This wasn't valet parking, or secure parking. This was regular, at the hotel parking. Needless to say, I was shocked and since I was staying for 6 days, worried about the extra nearly $200 that would be to my vacation budget. (Parking rate information is listed on the hotel's actual site - but not on affiliate sites, apparently.)

(Here is where I pause to give a 4 star rating to the STAFF of this property. The very kind night desk clerk did give me a discount on the parking, since I was misinformed and staying for such a length of time. That discount - though not the FREE PARKING I was expecting - was appreciated. The shuttle driver also gets a thumbs up, as he was friendly & VERY helpful. The desk staff & management was friendly & helpful, and the only reason they don't get 5 stars is because w/ all the issues that will be listed out below, I don't feel they were as helpful as they should have been.)

Many of the issues I will list below are minor inconveniences individually, but combined together create a pattern of unnecessary stress to travelers.

Parking - Along with the misleading information on the website, and exorbitant cost, there was also one night where no parking spots were available (there was extra parking below, but this information wasn't given until I'd parked along the side & let them know to make sure I wouldn't be towed!).

Security - The door from the parking lot to the lobby was supposed to be keycard entry only. However, the actual lock on that door was cored out, so it did not lock at all. That door led directly to the ATM/elevator, w/ no direct visibility by the front desk. Also, I had the "Privacy Please"/Do Not Disturb placard on my door for my entire visit. I'm only one person & don't need daily room maintenance, and also don't care for people in the room. While I'm paying for the room, it is my "home away from home" and I like the security of knowing random people won't be in there unless invited. HOWEVER, one day I came back from being a tourist in the city all day, and the placard was off my door. It was in the middle of the floor of my room, the bathroom light was on, and there was a note on the bed that they "couldn't make the bed bc too many personal items were on it." I had a pretty bad anxiety attack at this, what felt like an invasion. I went down to the front desk to ask what their policy was for when the DND was on the door, and explained the situation. The manager didn't apologize right away but immediately asked if I was SURE it was on the door bc they wouldn't enter if it was on the door. I had to argue/explain & even then, there wasn't a sincere apology or any type of follow up to let me know what had happened/that they had talked to the staff.

Ice Machine - These were listed as being on floors 2 & 4. However, the machine on 4th floor was gone, just a gaping hole next to the soda machine. No one mentioned this when checking in (such as a heads up since I was staying on 4, that ice would only be available on 2 & perhaps an apology for any inconvenience? Or, really, just a heads up would have been nice!).

Soda/snack machines - These were Credit Card only machines, and again, this was not shared when checking in. If you did not have a CC, you had no way of using these machines. When I asked about it (because the strip reader wasn't working on several of the machines one day) I was told there was a gas station on the corner. The soda machine on my floor was Sold Out during my entire six night stay. Also, when I let them know that and also that the machines in the laundry room didn't appear to even be on, I was met w/ indifference & the excuse that they're "maintained by an outside company."

Shuttle - The shuttle driver was EXCELLENT. Friendly, professional, and a good driver. However, they apparently had another shuttle driver who was not reliable about being at work? Several times during my stay, I had to alter plans because they didn't have a driver for the afternoon. Yes, they have a "shuttle depends on availability" disclaimer, but I think it's normal to assume that means other guests scheduling the shuttle first, not that they won't have a driver for 2-4 days?

Charges - I paid for half the stay w/ my CC and half w/ cash. However, my card was charged incorrectly FOUR times, causing it to be locked and unusable for the majority of my trip. They charged the original, and then also the amount that I'd already paid in cash, along with two other miscellaneous charges that didn't match up to anything. These incorrect charges added up to over $500, and while I was told they'd been voided, they stayed in pending status on my card (locking it) for my entire trip. (I pay for most things in cash & don't use a CC often, but have since been informed this practice - including the locking up of the CC due to overcharging - is apparently common in the hotel industry? Ridiculous!)

Now, because I want to end on a positive note - I will say that, while I didn't feel the staff acted completely appropriately regarding the multitude of issues during my stay, they were helpful w/ other things and were very NICE. The wifi was reliable throughout my stay. The lobby had complimentary coffee & DELICIOUS cookies available. The complimentary breakfast was EXCELLENT - lots of great and varied options, cooked well & the dining area was well-maintained. The bed & pillow were comfortable, and while I did have several room issues, they weren't as big of a deal as the things I expressed above.

This review is the subjective opinion of a Tripadvisor member and not of TripAdvisor LLC.
stephencZ8227JA
La Pine, Oregon
4130
Reviewed April 12, 2019
Suitable holdover

We stayed here as it was very close (about 3 blocks) from the space needle and we were only staying one night. The drawbacks are; parking was very challenging and your charged to park there; there was construction directly in front attributing to traffic congestion and noise; Our room was very small and very cramped; no ice available on our floor as the ice machine was missing; the complimtery breakfast offered no sausage or bacon.

This review is the subjective opinion of a Tripadvisor member and not of TripAdvisor LLC.
Nick H
East Wenatchee, Washington
12
Reviewed April 11, 2019
Talk To Tracy!!!

My girlfriend and I stayed at the Quality Inn in downtown Seattle, and we had a great experience. When we checked in, Tracy was so nice and helpful. She was very friendly and talkative, and really made us feel welcome. She even upgraded our room! Throughout our 3-day stay, she continued her excellent customer service by giving us great directions, recommendations, and even got us some paper plates and silverware to use in our room. The hotel itself was nice, with a good breakfast bar and my favorite, a hot tub in the room. We will definitely be staying there again!

Room tip: We got a room with a jacuzzi tub, and it was very nice so I recommend trying for that.
Ask Nick H about Quality Inn & Suites Seattle
2  Thank Nick H