Expedia.com
Travelocity
Orbitz.com
View all 10 deals
Prices are the average nightly price provided by our partners and may not include all taxes and fees. Taxes and fees that are shown are estimates only. Please see our partners for more details.
Oxon93
Frankfurt
10388

Old hotel in a central location in Seattle: the best part of the hotel is location. Otherwise, it is an old run down hotel, though with acceptably clean rooms. TV has only 4 stations and no wifi in the rooms. It featured an old cathode ray tube TV.

The front desk was friendly and helpful.

If all you want is an affordable simple hotel in a central location, this hotel maybe acceptable to you 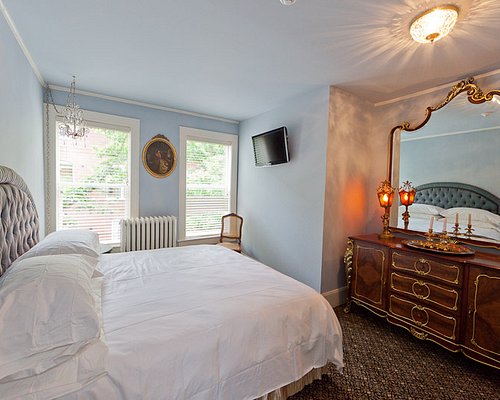 Top Rated
Inn at the Market

This place is unbelieveably bad. Built apparently in 1928, and has had nothing done to it since. Everything is dirty - for example the lift door frames have congealed dirt all along them. The rooms are old and shabby, and as for power points - forget about it! You feel grubby just looking at the rooms let alone touching anything.

They even still have the little slots behind the reception desk for keys. Wifi poor of course - really only worked in the gross lobby.

The only saving graces for this hotel are that it is very centrally located in downtown -you can walk to most places, and there is a station only a block away; and that it is extremely cheap for a downtown hotel - I guess the only reason it survives.

There is a mysterious bar/restaurant underneath the hotel, which at first glance looks derelict from outside. But you get a great cheap breakfast here, old USA diner style.

Overall though you are better paying more money for a better place.

This review is the subjective opinion of a Tripadvisor member and not of TripAdvisor LLC.
keithnz1
lower hutt
2213
Reviewed August 24, 2016
Not good

Rooms were small but reasonably clean, the hotel itself was old an had no work done on it for many years, rusty pipes in bathroom, windows wouldn't open properly, no air con and just overall grubby and not that cheap

This review is the subjective opinion of a Tripadvisor member and not of TripAdvisor LLC.
Marianna E
25
Reviewed August 22, 2016
Mold, rust, dirty, filth, bugs, and more galore!

Absolutely DISGUSTING! STAY AWAY!!!
The rooms (we saw 3 and chose the "best" of the worst) are filthy, dirty, and stained with mold everywhere, worn out carpets, holes in the walls with exposed wires and outlets, dirty bed linens, revolting old blankets, uncomfortable beds with bumpy mattresses that fall to the sides. We could barely sleep. The only lamp had such a dusty lampshade, it turned grey and black. NO A/C and NO WI-FI. We were only allowed to choose another room because we called Expedia and complained. We absolutely would have left but stayed only because all our activities were already scheduled for that location and we arrived late in the evening. Thankfully we were there only one day! All the rooms had a very unpleasant odor. We asked for extra towels and wrapped them around the pillows. We slept in our clothes and my daughter slept in a shower cap. The bathroom had a broken sink (broken wall behind it had a piece of cloth taped to it to cover the hole), repulsive dirty floor; everything is rusty and molded. We didn't even take showers, the bathtub was sickening to step into. Had to wait 5 minutes for hot water. Elevator was broken for our second night, it had a hole in the wall next to it, the doors would open while the elevator was still moving, the door had to open and close several times before moving (while "functional"). Even the sign on the front of the hotel was missing a few letters. Staff was absolutely indifferent, they claim to have no idea how appalling the rooms are and could not care less. There are no key cards, they gave us one key and said that if we lose it, we have to pay $25.00. It'd be a favor to them if we lost it. I cannot believe that the hotel hasn't been shut down due to health hazards, filthy conditions, and everyone continues to falsely advertise it.
Everything needs to change! This hotel should be shut down until it's been remodeled and cleaned. It's a shame that Seattle is being represented with such a dump wearing its name!

This review is the subjective opinion of a Tripadvisor member and not of TripAdvisor LLC.
Goldenpenny89
Reggio Emilia, Italy
183104
Reviewed August 5, 2016 via mobile
No No No...

Cheap for Seattle standards and cheap in every other sense.
The room is old and not perfectly clean, the TV doesn't work, the bed is small and unconfortable, the window is dirty and difficult to open, the bathroom is small and there's no hooks or bars to hold wet towels and there's no holder for the toilet paper. The shower is warm then cold then hot then cold again. The wifi works only in the lobby.
But....The location is spectacular. Just in Seattle downtown close to the waterfront and the piers and not far from the space needle.
I can't recommend this hotel. ..But if you want to save money and you're not too squeamish...

This review is the subjective opinion of a Tripadvisor member and not of TripAdvisor LLC.
narla2
32
Reviewed July 30, 2016 via mobile
Needed three nights walking distance to waterfront