This place is not new! It's also not... - NEW 4bedrooms 2bathroom apt, Fourth Floot stay 8-10 people

QWhLXzRfYkxD
other travelers have booked this property 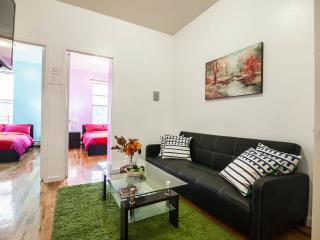 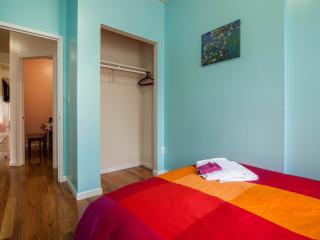 14 helpful votes
“This place is not new! It's also not two baths! It's location is horrible!”
Reviewed August 16, 2016 for a stay in August 2016
14
people found this review helpful

My issue with the property is that it was not what it was advertised to be.
First, it was advertised as "new" 4 bedroom and two baths- It may have been renovated at some point, but this property is far from new. The bathrooms were not updated and the kitchen area did not look updated and certainly was not new. I chose this property because I felt there was no way I could go wrong with a new property.

Second, the property is advertised as a 4 bedroom 2 bath, fourth floor. When we arrived the property owner's husband was confused and thought we rented the third floor. Neither of which was four bedrooms and two baths. The fourth floor was 4 bedrooms, 1.5 baths. The half bath was a toilet and sink stuck in a closet beside the full bath. There were 6 of us and we could not spend four days under these conditions. That is not what we paid for.

Third, the owner's husband indicated that if we wanted the fourth floor, the unit we rented, he would need to install an air conditioner from one of the other units. He had his tool box out and was sweating profusely. There was no air conditioning in the unit on the fourth floor. This was unreasonable. The unit was advertised as an air-conditioned unit. We have small children, one with asthma. We were not willing to risk him having an asthma attack due to the condition of this unit. Furthermore, it was in the upper 80s , if not 90s in temperature. This is totally unacceptable.

Further, the advertisements show the exterior of nice buildings to make one think this is the building. Actually, the building is in a rundown area and looks nothing like any of the exteriors portrayed in the photos. This property did not meet our expectations. We stayed there for 10 or 15 minutes and had to find some place to stay with no plan of where to go or availability in New York City. This was a horrible experience for me and my family.

The owner was called on the phone while we were there and I was trying to explain to her this unit was not up to expectations and I asked if she had another property to accommodate us. She was snappy and rude and very aggressive. She indicated that she did not. She had the third or 1st floor of this place, but none of the units were four bedroom, 2 bath. Please understand my frustration in this matter. I would not have left there with my family, with no place to go for no reason.

Date of stay: August 2016
Liked best: I did not like anything about this property!
Liked least: Not what I paid for!
Traveling group: Young Children
Would you recommend this hotel to a friend?   Yes.
Was this review helpful? Yes
This review is the subjective opinion of a TripAdvisor member and not of TripAdvisor LLC.
all thing is wrong.
This response is the subjective opinion of the management representative and not of TripAdvisor LLC.
Problem with this review? Thank you. We appreciate your input.

Travelers are raving about these New York City hotels

Looking for a place to stay in New York City?
View all 1,057 vacation rentals