$329
$217
View deal
Traveluro$220
Trip.com$248
Hurb$329
View all 21 deals
Prices are the average nightly price provided by our partners and may not include all taxes and fees. Taxes and fees that are shown are estimates only. Please see our partners for more details.
obs497
13

Attractive hotel in a great location. Staff were attentive and the level of service was excellent. Manager Jenelle was welcoming, professional and extremely helpful. While I was only a first-time visitor to the Royalton the staff made me feel like a highly valued customer. I will return to this hotel on future visits to Manhattan.More

Thank you for sharing this wonderful review, obs497!

We are very pleased to hear that you had an enjoyable experience with us! We appreciate your praise for our team; they work very hard to ensure every guest feels right at home. We are delighted you felt welcomed and valued during your time with us! It nice to hear to loved our prime location near so many of the city's best attractions as well.

We'd love to share another positive experience with you in the future! Have a beautiful day, and thanks again for sharing!

Report response as inappropriateThank you. We appreciate your input.
This response is the subjective opinion of the management representative and not of TripAdvisor LLC.
See all 3,159 reviews
Nearby Hotels 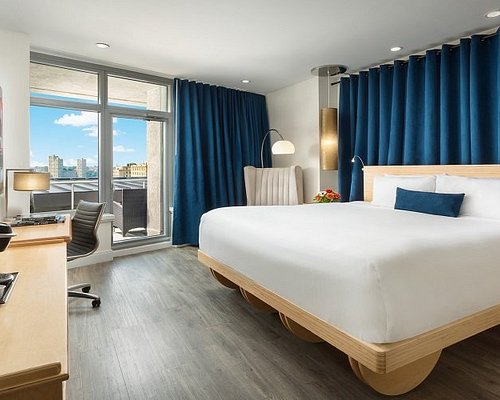 We hadn't been here for many years and decided to stay based on location, which is great. Close to Broadway and Times Sq but not in the thick of it. In midtown so if you have to go uptown or downtown 44th St is ideal. I also booked a room a couple of levels up from the entry category as these entry level rooms are small. First impression of the lobby was like the days of old, flattering lighting and a real buzz at the bar. We didn't try the restaurant which has a different "concept" to when we were here last with a limited menu, and is now probably focussed on theatre goers. Our room was fine, a bit of strange configuration with limited storage but was relatively comfortable. There were signs of wear and tear and the look was very last century. The resort fee type charge at $30 per day is for free wifi, newspaper (from the concierge desk) and phone (I already get free wifi as part of a loyalty program) and like many NY properties is not justified. Next time in NY I will try to find a hotel that doesn't charge such a fee. I would rather that it was just included in the rate as it adds no value to the guest experience and feels like a collective rip off. It wasn't a bad experience and was a nice contrast to a chain hotel but in the end not a great stay but at the right price I would stay here again. Of note the departure by cab was a bit of a challenge due to a street fair, the bell person walked with us for two blocks and made sure that we got a cab. This took 20 minutes and so the extra care and attention was much appreciated and we made sure was reflected in an appropriately sized tip!

We appreciate the feedback, RossY415.

We're disappointed that your stay with us was less than ideal. It's unfortunate you've noticed a decline in the quality of our accommodations. We care about the comfort of our guests so we'll address your concerns with our team moving forward.

We hope for the opportunity to host you again soon for a more positive experience.

Report response as inappropriateThank you. We appreciate your input.
This response is the subjective opinion of the management representative and not of TripAdvisor LLC.
JuanDoe123
12
Reviewed July 5, 2019
Nothing Royal About "The Royalton"

Let me just start by saying that I had planned to stay here one night as part of my anniversary trip. I called two weeks ahead to see if they did anything special for anniversaries and to learn more about these packages they had on their website. I called two different times and was transferred to four different people, none of whom had any answers. When I said it was my anniversary the representative continually said, "you and your lovely wife". While I may be a man... I do not have a wife. The most they said I could do was order a bottle of champagne from the bar and I never was able to learn about the packages they boast on their website. I eventually just gave up.

Once we arrived it was an absolutely awful experience from start to finish. When you walk in it is dark as a cave and you are immediately accosted by some sort of leather-scented "branded" smell and very loud music (picture it: a throwback to a 2008 Abercrombie and Fitch). I had to wait 15 minutes to just get my bags put in storage before my check-in, I asked twice for the bellhop was and while I waited a couple who arrived after me immediately had their bags taken. They required a $200 security deposit, that they said would be released after about a week. Once I did check in, The room is dated and aside from the vague nautical theme, it could have been Holiday Inn. Starving, we called down to ask place an order with the restaurant, little did we know it was closed for lunch and dinner except for a few days a week. That night we called down for ice to learn that their ice machine was broken and they "could not get ice" from one of the two bars in the lobby.

I really could go on, but I will stop my ranting and leave it at this: If you want a 4-star experience, take your money across the street to the Sofitel or if you want to save go to the Holiday Inn, your room will be about the same and you might actually enjoy your stay.

We appreciate the feedback, Juan.

We're disappointed your time with us was less than ideal. We care deeply about the satisfaction of our guests so we regret that our features and amenities didn't meet your expectations. Thank you again for your feedback. We'll be sure to address your concerns with our team moving forward.

We do hope you give us another opportunity to share a more positive experience with you soon.

Report response as inappropriateThank you. We appreciate your input.
This response is the subjective opinion of the management representative and not of TripAdvisor LLC.
A63A
58
Reviewed July 5, 2019
Holiday Trip

The all Staff as usual is amazing but in particular BK was fantastic doing everything he could to let us feel home and helping us for every little request.

At the Front Desk Stefano, Marcus and Romaine are as usual very professional friendly and helpful not to forget Dino and the guys at the Front door.

Again a fantastic experience will go back very soon.
Thank you all.

Thank you for the wonderful review!

It's very pleasing to hear our staff took great care of you. We appreciate your compliments regarding our hardworking team. We pride ourselves on providing excellent service to our guests and we strive to go above and beyond expectations. We look forward to hosting you again in the future!

Thank you again for sharing your review. Have a wonderful day!

Report response as inappropriateThank you. We appreciate your input.
This response is the subjective opinion of the management representative and not of TripAdvisor LLC.
Karin Næss B
Oslo, Norway
510
Reviewed July 3, 2019
Central hotel in New York

Nice location, next to Times Squares. A bit loud music in the reception, but nice bar with a lots of places to sit. Nice drinks. Big room, with a seperate room with big mirrors. Very helpfull staff and nice price

Thanks for the amazing review, Karin!

It's excellent your time with us was so fantastic! We take great care in providing top-notch service for all of our guests. Your praise for our team lets us know we're doing our job! We look forward to hosting you again soon so we can share another splendid experience with you!

Have a fantastic day!

Report response as inappropriateThank you. We appreciate your input.
This response is the subjective opinion of the management representative and not of TripAdvisor LLC.
Michellemarie7
Northern va
57
Reviewed July 2, 2019
Loved It!

Booked the loft specifically for the tub. Did not disappoint. The bonus was how genuinely engaged every member of the staff we came in contact with was. And location? Perfect. I was on the fence when booking the Royalton instead of the Algonquin or the Iroquois, which are on the same block but we for sure made the right choice.

Review collected in partnership with this hotel
This business uses tools provided by Tripadvisor (or one of its official Review Collection Partners) to encourage and collect guest reviews, including this one.
Ask Michellemarie7 about Royalton New York
1  Thank Michellemarie7

Thanks for the fantastic review, Michellemarie7!

It's excellent you had such an amazing stay with us! We're delighted our team made you feel so welcome and valued during your time in our hotel. We endeavor to go above and beyond to ensure our guests have a memorable experience. That's what we like to see! We are also thrilled to see our room refurbishments and prime location were able to help make your trip unforgettable. We can't wait until your next visit so we can share another fantastic experience with you soon!

Have a beautiful day!

Report response as inappropriateThank you. We appreciate your input.
This response is the subjective opinion of the management representative and not of TripAdvisor LLC.
View more reviews
PreviousNext
1…515253…