$96
$79
View deal
Free cancellation until 10/28/21
Booking.com$94
Hotels.com$94
ZenHotels.com$96
View all 18 deals
Prices are the average nightly price provided by our partners and may not include all taxes and fees. Taxes and fees that are shown are estimates only. Please see our partners for more details.
misslooloo86
Bates City, Missouri
247

One night in Chinle

We were allowed to check in early and the room was clean. Bed very comfortable and of course the close proximity to Canyon de Chelly can't be beat. The were only two negatives. The restaurant was not open during lunch (they were open for breakfast and then shut down until 5). There are not many other options for food (or anything else for that matter in Chinle, so we had to tough it out until the early evening when the restaurant opened back up. Now that I know that, the next time we will bring lunch/snack food for the midday after our hike. Secondly, the wifi was not very reliable. Not unexpected in the remote area, but we all know how much data overage charges can hurt!More

Thank you for your recent stay at our hotel. I am pleased to hear that you found our rooms clean and had a pleasant early check-in experience. On the other hand, I'm sorry that the WiFi issues and limited restaurant hours prevented you from fully enjoying your stay. We always strive to provide guests with superior services and facilities, and I am sincerely sorry that we fell short on this occasion. Know that your feedback is appreciated and will help us improve on these aspects. We hope you will consider staying with us again on your next trip.

Report response as inappropriateThank you. We appreciate your input.
This response is the subjective opinion of the management representative and not of TripAdvisor LLC.
See all 1,041 reviews
Nearby Hotels 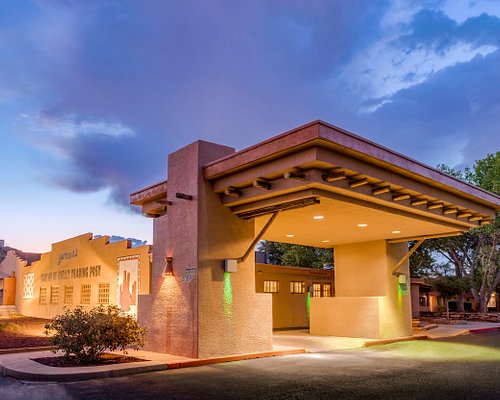 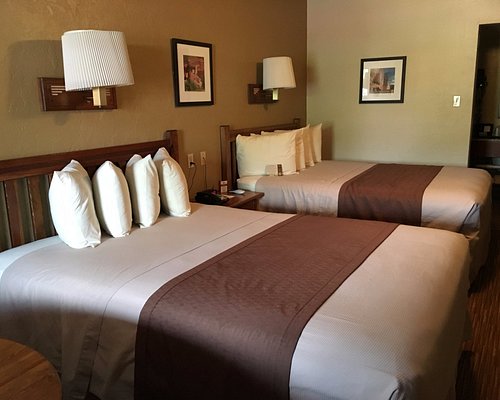 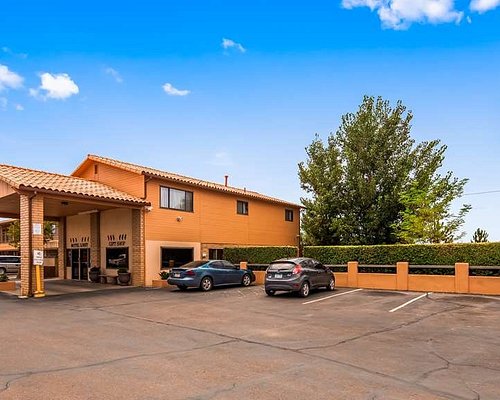 I was surprised at the quality of this Holiday Inn given the fact that with few options it could definitely be worse and visitors wouldn't have a choice. It probably was another motel originally since it is set up with three separate buildings (a lobby/gift shop/dining building and then two buildings with the actual hotel rooms). As another reviewer noted the buildings are two stories and there is no elevator. None of the buildings are connected so you either have to walk or drive from one to the other.

My room was nice and clean and bathroom was great. Some rooms had balconies, but those I saw where facing the parking lot so that's not much of an incentive for me. My room faced a hillside, which was nice, but I don't know if there were any balconies on that side of the hotel as my room did not have one. I was there over Memorial Day and there was a tour bus and lots of motorcycles in the parking lot, so it was crowded, but not terribly loud. It also appeared that there was a function going on when I arrived so as another reviewer noted you may want to call ahead if you are planning a special dinner at the hotel as there aren't a lot of dining options in Chinle. Overall, I was pleasantly surprised by the cleanliness and upkeep of the hotel.

My complaints are fairly minor. I couldn't check in early (at 1:00 pm) because the checkout time is noon. I rarely ever check in early, but after driving all morning it would have been nice to freshen up a bit, but I do understand that it was busy over the holiday weekend. I also realized I forgot my brush and saw that they offered free toiletries. If I recall correctly the standard toiletry placard in the bathroom said to call and they would bring you the missing item. I called and was told I would have to come to the lobby. As I mentioned this meant a walk across a large parking lot to another building and of course I realized I was missing my brush after I had changed into my pajamas and gotten ready for bed so needless to say I was annoyed at myself for forgetting my brush and then further annoyed that I had to get dressed again to get a cheap plastic comb so I could deal with my hair the next morning. So again, it was my fault, but it was one time I wish someone could have just dropped by my room. I suspect it was because the staff was limited and couldn't leave the front desk area. All in all though I think the Holiday Inn is probably the best option in Chinle. It's also right outside the Canyon de Chelly entrance and visitors center so you can bypass any traffic (and as another reviewer rightfully noted free-range animals) on your way to the rim drives.

This review is the subjective opinion of a Tripadvisor member and not of TripAdvisor LLC.
Elaine M
Arlington, Virginia
6838
Reviewed June 15, 2017
Good choice for visitors to Canyon de Chelly

There are not a lot of hotel options near Canyon de Chelly, but this one works well for proximity to the park. It is a basic Holiday Inn, but the rooms were fine and were kept clean, and the hotel grounds are quite nice. There is a small-ish pool area (I was there before pool season so wasn't able to try it out) and attractive garden space near it. Meals in the restaurant were fine if not fancy (I was with a tour group and we had an extensive breakfast buffet - not sure if that is available for individual travelers). Be aware that the hotel does not have elevators, and also that they do not serve alcoholic beverages (I think the entire town does not). I did see some horses a field next to the hotel, but never saw them on the roads.

This review is the subjective opinion of a Tripadvisor member and not of TripAdvisor LLC.
paramedic952016
Stilwell, Oklahoma
158
Reviewed June 14, 2017
No elevator despite it being a 2-story hotel !!!l

Hotel is conveniently located a short distance from park entrance, but in a very desolate area. Remarkably, Rooms and keys were ready for our travel group of 29 people despite our arriving right at 4p. Unfortunately, the only way up to 2nd floor rooms are via steps making it very difficult for those of us who were disabled. Unless you drive into town area, the hotel restaurant is the only place to eat, but pleasantly surprised at quality. There is an outdoor pool and patio area which makes a nice place to sit and visit while drinking coffee or hot chocolate. Rooms don't have microwaves, but staff promptly delivered one to a member's room upon inquiring.

Room tip: If disabled or unable to climb steps for any reason, request ground floor and be sure to confirm request a day or two before arrival.
Ask paramedic952016 about Holiday Inn Canyon De Chelly (Chinle), an IHG hotel
Thank paramedic952016

This review is the subjective opinion of a Tripadvisor member and not of TripAdvisor LLC.
NancyBirk
Sun City, Arizona
604251
Reviewed June 13, 2017
Great Location

We were happy to find a hotel close to the National Park and it was perfect for that. However, the restaurant was closed for both lunch and dinner for private events and it would have been nice to have a warning as this was our anniversary and we wanted to eat someplace other than fast food. The rooms are clean and spacious and the grounds are nice but it could be improved by having some chairs on the patio or balcony of your room so you could enjoy the outdoors.

This review is the subjective opinion of a Tripadvisor member and not of TripAdvisor LLC.
connieb609
Scottsdale, Arizona
102
Reviewed June 10, 2017
WATCH OUT FOR THE LOOSE COWS AND HORSES ON THE STREETS!

Few choices in Chinle to stay but this hotel was clean, nice grounds and outside pool. Only a few restaurants in town and a Subway and Burger King. Hotel does have a restaurant on property and is located only 1/2 from visitors center. We only drove along the South Rim and stopped at all the overlooks. There are very steep cliffs so hold on to children! Stop at the National Park Welcome Center (No admission to drive along the rim). Enjoyed a lecture on the Navajo Hogan there. Be aware - this is open range and in the middle of the street you will find loose cows and horses. It's very dangerous at night!