$521
View deal
Free cancellation until 11/30/21
Snaptravel
Lol.travel
getaroom.com
Prices are the average nightly price provided by our partners and may not include all taxes and fees. Taxes and fees that are shown are estimates only. Please see our partners for more details.
rubyjp88
2346

Our stay was absolutely amazing! We stayed in a 2 bedroom villa with ocean view. I’m not sure what exactly I was expecting, but this far exceeded my expectations! We were placed on the sixteenth floor with a HUGE ocean view and balcony which provided a perfect spot to enjoy the Lu’au and the movie night! The lagoon on the resort provides just the right amount of waves for kids to play comfortably in the water without being pushed around. I honestly cannot wait to go back!

Trip type: Traveled with family
See all 6,758 reviews
Nearby Hotels 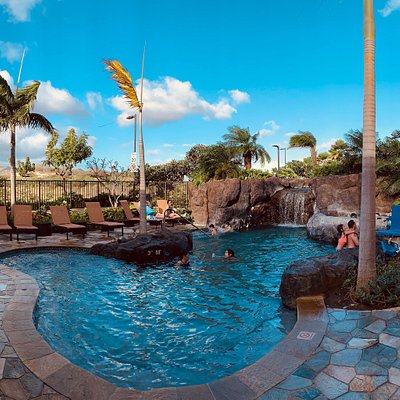 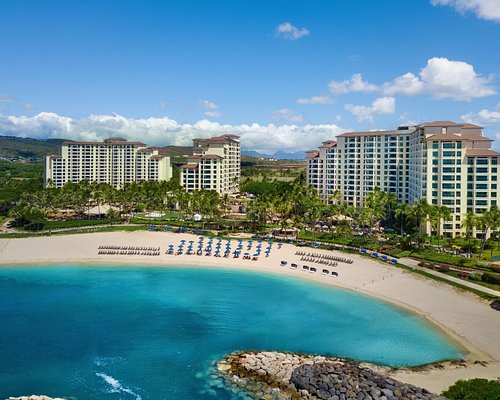 There is a complete lack of respect for privacy and their policy concerning this is extremely disruptive and invasive. One example was when the person cleaning the windows came down on ropes in front of our balcony. I was shocked to see someone look in at eye level because we were on the 8th floor. A few hours later, someone entered our room (even though we had the occupied sign on the door) to give us written notice about the window cleaner. A note under the door (instead of entering our room) BEFORE they started the work would have sufficed. And, more importantly, although they do not clean the room during the stay, they enter the room multiple times a day, even with the "occupied" sign on the door. We were woken up from naps twice after a long boat excursion. And, a housekeeper began to enter the room when my husband was exiting the shower. I stopped her at the door and asked why she was there for the 3rd time that day. She pointed to her phone and said she needed to enter. Without my intervention, that could have been an uncomfortable situation for both my husband and that staff. My husband called and spoke with her supervisor. He said it is their policy to enter the rooms whenever and how often they want. He said they don't need a purpose and they do that with every room. We were not satisfied with that answer, especially since it is very disruptive for them to enter the room multiple times a day without a purpose (I.e. a leak, housekeeping, something!) We then went to the front desk to express our concern to management, but management refused to speak with us. The lady at the front was trained to be the "gate keeper" and listen. She said "95% of their guests liked to be checked on". It is hard to believe that 95% of the guests like to be woken from a deep nap after being on an excursion all day, or to have someone walk- in when they are walking out of the shower. Not only is this not good for guests, it is not good for their employees. The next day we asked to speak with the General Manager, and again, management refused to speak with us. We then spoke with a lower level supervisor that said they began checking all of the rooms because of the "Vegas Incident". This was a scary thought. Do they think someone is going to shoot people from the windows so they have to enter everyones room everyday, even when they have a "occupied" sign up? I don't know, but I hope not. What I do know is that we were very much looking forward to staying at Aulani for their amenities, however, we did not get to use the ones that were important to us because they were either not maintained or under maintenance. We also did not have a comfortable bed to sleep in, the room was dusty and not well kept, and we were disrupted by staff multiple times a day. Aulani charges a price similar to Marriott and Westin and in some ways are similar, but Aulani does not use the same quality beds, pillows, or appliances. Aulani has a policy to disrupt the guests, and management does not want feedback, which indicates they don't care what their guests think and they do not want to make an effort to improve. For these reasons, I give Aulani 1 star and will be staying at the Marriott or Westin next time.

This review is the subjective opinion of a Tripadvisor member and not of TripAdvisor LLC.
susanmN9181IV
18
Reviewed September 15, 2019 via mobile
Disney Aulani

Disney’s pool area was being renovated which pushed the swimming population all together making for some congestion. Pool patio is extremely slippery. Saw several people fall. Lobby is beautiful but rooms are becoming dated and in need of some refurbishing. Costs of dining or drinking on property are astronomical. Rent a car and hit Walmart or Costco. We are Disney vacation club owners so the decor compared to the Orlando resorts is very dark and dreary. The only music you will hear for the entirety of your stay is Hawaiian. Lagoon is peaceful and beautiful. There is basically no evening entertainment so it’s bedtime early and up early. If you are a football fan only some of the NFL games are broadcast. If it is a 1 pm game back east it is broadcast at 7 am. If your game is not on you have to head to Chili’s at 7 am to view it. Now with Disney owning ESPN and their relationships with streaming networks the TV should be much better. The Marriott next door and Four Seasons are very nice. Staff members are very sweet and go out of their way. Catamaran trip booked at Aulani concierge desk was very expensive as was the luau.

This review is the subjective opinion of a Tripadvisor member and not of TripAdvisor LLC.
Tiffany V
Baton Rouge, Louisiana
8274
Reviewed September 13, 2019
Beautiful - as expected from Disney

We stayed in the grand villa as part of DVC. It was a very spacious 3 bedroom 3 bath room. The views were spectacular and being at the end of the hall, we didnt have the noise of people passing through at all hours. I love the extremely long balcony that gave a great view of the layout of the pools and beach. They were working on the lazy river and stuff in the middle, so all of that was closed off for construction. It kinda sucked to hear that noise going on throughout the day, but they have to get work done some time, so you kinda just had to deal with it. My one complaint would be that the parking spaces in the garage are very small. So many people didnt park their cars correctly and were crossing into other spaces so it made it very difficult to park correctly or even find a spot. I guess some guests couldnt be bothered with straightening their cars out as a courtesy to others. The full kitchen was nice and we shopped at the nearby walmart and other grocery store to make breakfast every morning or have sandwiches and snacks. We explored the rest of the island for more local choices for dining, though we did eat at Ama Ama on our final night - which was delicious!

Room tip: If you go with a larger group, the villas are a very good choice
Ask Tiffany V about Aulani, A Disney Resort & Spa
4  Thank Tiffany V

This review is the subjective opinion of a Tripadvisor member and not of TripAdvisor LLC.
808l
Aiea, Hawaii
1030
Reviewed September 13, 2019
Wonderful

We stayed in a villa. It's pricey, even w/ kamaaina discount. It was spacious and even included a kitchen (that we didn't use). The bathroom was nice and even had a jacuzzi. The pool is relaxing but very crowded. The character bfast is not as good as Goofy's Kitchen in terms of selection, quantity and overall character experience (none came to our table). Would love to stay here again.

This review is the subjective opinion of a Tripadvisor member and not of TripAdvisor LLC.
jbui1018
Washington
2623
Reviewed September 12, 2019
Beautiful resort with the added Disney charm

Took a family of 5 here for 3 nights and it was a magical experience. The hotel was beautiful with multiple pools, slides and various water activity for kids. The beach was calm and perfect for toddlers. My kids particularly enjoyed going to Aunty's beach house. Its free for kids 3 and over. Meals are expensive, but there are grocery stores nearby. Will definitely go again when I can afford it ;-)