Review of Aina Nalu
Reviewed May 7, 2019 via mobile

We love ️ it at Aina Nalu!! We have gone here for decades! The salt pool is so nice and calming. Please note this is a family hangout, so there are times of craziness but still nice. Two pools if you want to get away from the other one. Nice hot tub!! Rooms are always clean and well equipped. I do think the cleaning fees are crazy high in the last couple of years. We pay for the parking which is high. But the location can’t be beat.

Trip type: Traveled as a couple
See all 1,297 reviews
Nearby Hotels 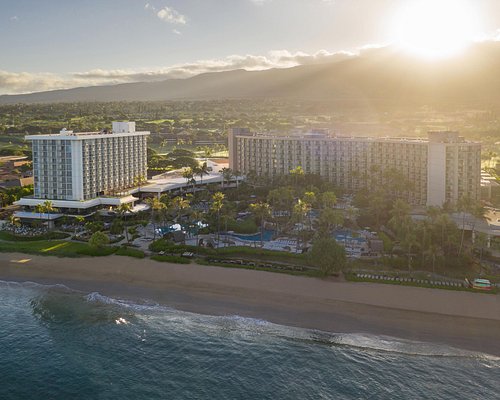 Stayed in a nice 2 bedroom condo at aina-nalu a vacation hotel of outrigger. It’s in a great location. Next to the very center of the old historical city of Lahaina. I loved the main street on the waterfront called Front Street. My first time there. I especially fell in love with a restaurant called The Lahaina Fish Company on Front Street. Much more too!

This review is the subjective opinion of a Tripadvisor member and not of TripAdvisor LLC.
Angela R
Friendswood, Texas, United States
3535
Reviewed April 30, 2019
Wonderful Complex

We rented a condo here for our week stay in Maui and it was perfection! The grounds were well kept, clean and had all the amenities you'd expect at a hotel but had the very comfortable, relaxed vibe of home. Parking was accessible, shaded and convenient. The pools were clean and not too crowded and the location is PERFECT for walking around the best parts of Lahaina!

This review is the subjective opinion of a Tripadvisor member and not of TripAdvisor LLC.
Ulwazi
Edmonton, Canada
235341
Reviewed April 27, 2019 via mobile
Very Run Down, Great Location

We stayed at Aina Nalu for 9 nights. We picked this property due to its location. The location did not disappoint. This property is very run down and in desperate need of a complete overhaul. The units are really small. The bedrooms, kitchen, and living area is really small, but the bathrooms are a reasonable size. Will not stay here again.

This review is the subjective opinion of a Tripadvisor member and not of TripAdvisor LLC.
Jbhes
Lompoc, California
27569
Reviewed April 3, 2019 via mobile
Great location

We stayed at Aina about ten years ago and the changes were generally not positive. The positives. The unit was clean, well equipped and the bed was comfortable. Location was great for walking about Lahaina. However. The greeting and departure contact at the front lobby was very neutral. On our previous visit it was very friendly and included a welcome drink. The added cleaning and parking charges were negative changes since our previous visit. Only the bed was comfortable. We were never able to get one TV to work and the other TV needed special attention every time it was used. Since we were not on Maui to watch TV we did not report the issues until our departure when we left a written report of the issues at the front desk. We will probably not return or recommend Aina. Maybe, if this was our first visit, we would not felt so negative about this visit. However, when comparing to our previous visit, the changes made it an overall negative.

This review is the subjective opinion of a Tripadvisor member and not of TripAdvisor LLC.
rejsebjorn
41
Reviewed April 1, 2019
En oplevelse

Be aware on arrival at the hotel you will be asked if you want to park in the hotel area or if you want to find a parking space on the street, outside the hotel area… If you choose the street and afterwards regret it, it´s just a pity for you, cause then you have to pay parking for all the days you have stayed there - that is, for all the days you have parked outside ...and no – they will not refund. And it will mean that you have to buy a parking place and your hotel stay at the same time, either you want it or not. Perhaps they should make it more understandable so we all could have a chance to understand it?. We did, however, see normal Americans that where checking out, being very shock at this and said it was a scam. It seemed like it wasn't quite clear from the hotel - what it was the hotel actually was selling!!! It such a pity to end our stay after such an experience. Apparently the receptionist was fully aware of this. It seemed like the hotel had enough guests and they were the ones who set the rules, and we could just had at stay home.
When we arrived we were very tired, so the noise that was in the hotel room we thought was coming from the air-condition. Next night nothing was switched on, and that´s when we found out it was the fridge, that where making those laud uninterrupted sound in a very high tone. We turned it off and a natural defrost occurred. So after I cleaned it, it was put on the lowest keel and worked as it should - quiet.
At this hotel, there is no cleaning on our stay. So we had to keep it clean around us. When we left, we had to pay 150 dollars finally for cleaning and tax. Therefore, it was very surprising that we found a filled trash bin from the last guest…. it was pretty disgusting. After contacting the reception, it was picked up quickly. Very disgusting, specially when thinking of what we paid for, not a work that was done.
The day before we left the hotel, the socket/power outlet over the kitchen table went kaput, no power. We had to used the bathroom's socket for boiling of water and toaster.
We informed the reception and they said that they might do it while we were there, but we said that we were on vacation and thought they could do the repair the next day when we left the hotel. We would`t spend more time on several repairs there.

There are a naturally amount of many chickens in the Hawaii Islands. You have to be prepared for that.
At this hotel, every night they started to talk already at 03am and 4am and 5am and 6am, you have the opportunity to get early up and experience the sunrise.