Worth of your money - Koh Chang Lagoon Resort

Koh Chang Lagoon Resort
Koh Chang Lagoon Resort
Lowest prices for your stay
Lock in the lowest price from these sites
$41
View deal
eDreams$41
Tripadvisor$41
Trip.com
StayForLong
Prices are the average nightly price provided by our partners and may not include all taxes and fees. Taxes and fees that are shown are estimates only. Please see our partners for more details.
metteling
Lappeenranta, Finland
6131

Worth of your money

We stayd in two story bungalows. Rooms were good sized and clean. There were no double beds and the beds were a bit too hard but pillows were fine. There was a big refrigerator and good air conditioner. The bathrooms were a litlle bit dated but worked. We liked the stone walls. The cleaners did their job well. Notice that they will not give you towels for the beach, so bring your own.
The beach very beautiful and clean in front of the hotel and the trees gave nice shadow.
The breakfast was not so good as typically in Thailand, but you can have something to start the day. There were lot of nice restaurants nearby.
We liked Koh Chang very much and want to go back next year and stay in Lagoon Resort.More 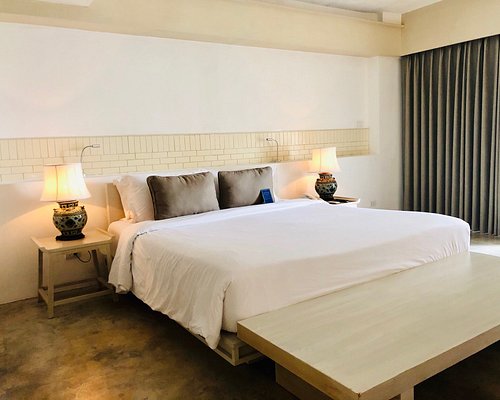 You are on the beach if you chose the more expensive 2200 baht a night rooms that are the old Thai style with a lot of wood in the room. You will be shown the more expensive rooms first. We opted for the 1800 baht room across the road with my requested sea view from a high floor. I loved the location the beach across the road is so laid back and relaxing with no hassle what so ever as you eat or drink. Bars restaurants and shops all your modern conveniences are on your doorstep - bank, coffee shop - 7 eleven and street market in the evening. I found the room a bit lacking - it had an old smell aroma but the balcony was a great place to sit and watch the world go buy. The shower was not very hot and when pointed out to reception was fixed very promptly. It’s a normal Thai buffet breakfast. We had a very good time due to the excellent location but there are bigger better cheaper rooms to be found in White Sand resort - e.g. Alina Grande

This review is the subjective opinion of a Tripadvisor member and not of TripAdvisor LLC.
Paul D
Bangkok, Thailand
74
Reviewed August 13, 2012
Great place

Not such a great place,nice location, shame about the over priced lousy food. Koh Chang is a beautiful island and better places can be found. I would recommend finding another similarly priced place to stay.

This review is the subjective opinion of a Tripadvisor member and not of TripAdvisor LLC.
eriktravels
Bangkok
419
Reviewed May 2, 2012
Terrible hotel. Best avoided

I found the Ko Chang Lagoon Resort via their website when I was searching hotels on White Sand Beach for my family. I am a ten year expatriate living in Thailand and not a random tourist with silly complaints. I know Thai hotels and what to expect for a price. If this were a 400 baht/night hotel it would still be too much. This place is a dump in a great location. Here are the specific points. The price was 2200 Baht per night, as is generally the price with the neighboring hotels. The rooms are dark, old and falling apart. We took 2 rooms for 4 nights and they were so bad that we cut our trip short by a night even though we already stupidly pre-paid. You can see that some of the rooms have been upgraded only when the bathrooms had completely fallen apart. The beds were terrible and despite our request for a double bed, they only pushed two single beds together. The air conditioning has only one setting: Freezing. The room was mosquito infested from holes in the bathroom and we spent sleepless nights hiding under the sheets. The wooden boards leading to the beach are decayed and unstable. They are dangerous for children to walk on. The grounds behind the hotel, in front of the beach, are completely unkempt. There were Thai families camped out there like it was a tenement. On top of this they charge for internet in the rooms and I had to make a special request to get a TV remote that was not a completely, obviously broken, useless piece of plastic. The "newer" remote did not work either. Clearly there is no attention to detail or upkeep or management on this property. At 2200 baht it is a joke. I've stayed at backpacking bungalows with better quality. Throw in a mediocre breakfast and an unhelpful staff (as I dragged our bags down the stairs one of the bell boys sat in a corner hiding by the laundry so he could talk to his girlfriend on his mobile) and you have the perfect storm. The owners must be laughing at the silly farang who stay here.

If you are looking to stay in this area of White Sand Beach (Hat Sai Kow) you should check the MAC hotel or Cookies if you want something worth the price. This place was a joke.

This review is the subjective opinion of a Tripadvisor member and not of TripAdvisor LLC.
LUKE H
London
814
Reviewed April 24, 2012
Lovely location, but we got chronic food poisoning.

Myself, wife and baby daughter went to eat at the lagoon restaurant during our holiday in the month of March 2012.

I want to say first before I go on that the service was very good and it was a beautiful setting. We were made to feel welcome and we ordered some BBQ fish, beef and chicken from one of the 'boat' displays which has the produce laid out on ice.

My daughter being a fussy 2 year old did not eat much apart from some chips and a watermelon shake, whereas I and my wife happily devoured our delicious food.

However the fun stopped a few hours later. When we got back to our resort both I and my wife were suddenly hit with severe bouts of heavy diarrhea. After this the almost projectile vomiting started. This then continued for about 24 hours with both of us being very sick and weak with two year old to care for.

The positive was that my baby daughter was OK as had she also eaten the contaminated food this would definitely have hospitalised her.

When we went back a couple of days later to walk along whitesand beach, we both noted when walking past the Lagoon resort that there is an alley way which runs along the side taking you from the road to the beach. There is a 4 foot gap at the bottom of the resorts side wall where there is some sort of kitchen where they wash dishes and whatever else is done there. Well this whole alley smelled of sewage, both during the day and in the evening. Perhaps this had something to do with us falling Ill? Either way, it did not smell good for somewhere serving food.

I have penned this in the hope the restaurant / resort check out there working environment. It would be real shame for this to happen to anyone else. We lost a good three days of Holiday over this, which we won’t get back again.

For the record, it’s not just as being over sensitive to foreign food. My wife is from Thailand and I have travelled for years.

This review is the subjective opinion of a Tripadvisor member and not of TripAdvisor LLC.
LauraJosh
Haslev, Denmark
85
Reviewed April 23, 2012
Nice location

Stayed there for 2 weeks. The breakfast is pretty poor, we didn't get shampoo/soap for the first week until we complained about it. Then they remembered for a few days and then forgot again. Cleaning was pretty poor too. The location is great though.