$183
$107
View deal
Expedia.com$153
Hotels.com$151
Lol.travel$183
View all 20 deals
Prices are the average nightly price provided by our partners and may not include all taxes and fees. Taxes and fees that are shown are estimates only. Please see our partners for more details.
jacobie7
1

Review of DoubleTree by Hilton Hotel & Suites Houston by the Galleria
Reviewed July 18, 2019

I planned a family reunion for my family here July 12-14, 2019 and it was great. My family loved the hotel it was very nice and clean. They also liked the rate the hotel gave our group very affordable thanks Robin. She showed me around the hotel and the rooms and I knew this was the hotel for us. Hawani helped me with putting the finishing touches on our event. The food was very good, tasty and delicious. Matt did a great job with our breakfast Saturday and Sunday and he was very nice. Anasol did a great job Friday for the meet and greet and Saturday for our lunch. My family and I truly enjoyed our stay here and you will too. Thanks again Robin, Hawani, Anasol and Matt a job well done.More

It was such a pleasure having all of you here with us, and we thank you for taking the time to share your review. We will certainly share and celebrate your kind words with Robin, Hawani, Anasol, and Matt, and we hope to have the opportunity to welcome you again soon.

Report response as inappropriateThank you. We appreciate your input.
This response is the subjective opinion of the management representative and not of TripAdvisor LLC.
See all 1,471 reviews
Nearby Hotels Sponsored
DoubleTree by Hilton Hotel & Suites Houston by the Galleria
$153 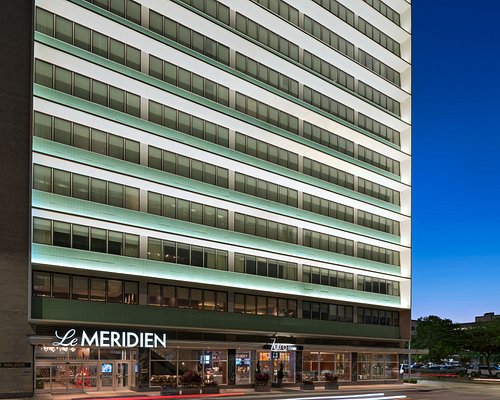 Hospitality suite for Honors members was the worst I've seen at a Hilton property. Very little offered, no staff and no alcohol provided in the suite. Parking lot more expensive than other Hilton properties nearby.

Thank you for joining us in Houston, we are glad to read that our Galleria location and friendly valet team left such a positive impression on you. We appreciate all of your feedback, though we regret to learn that your experience in our Honors Lounge fell short of expectation. We are always striving to improve upon our guest experience, and we hope to have another chance to fully win you over the next time your travels bring you our way.

Report response as inappropriateThank you. We appreciate your input.
This response is the subjective opinion of the management representative and not of TripAdvisor LLC.
eitsirk1996
Pearl, Mississippi
1
Reviewed July 16, 2019
Excellent Stay

Everything was great from check in until check out. The staff was friendly and helpful.This hotel is in area with great shopping and restaurants within walking distance. I would definitely stay here again.

From our friendly service to our prime location just steps away from the Galleria Mall, we are thrilled to read that you enjoyed everything about your DoubleTree stay! It warms our hearts to know that you have found a home with us, and we look forward to welcoming you time and again in the years to come.

Report response as inappropriateThank you. We appreciate your input.
This response is the subjective opinion of the management representative and not of TripAdvisor LLC.
Monique00
Auckland New Zealand
1113
Reviewed July 16, 2019
Good location good bed staff customer service very average

This hotel is close to the galleria shopping centre, which is handy. The pool area is nice , the gym is pretty good, the bed was good, the staff in the restaurant were not particularly attentive putting me at a sticky table for breakfast with no cutlery, food was very average. The front desk also didn’t go out of their way to help.

Room tip: If your not worried about getting great service this hotel is pretty well located, with good beds nice pool, and clean.
Ask Monique00 about DoubleTree by Hilton Hotel & Suites Houston by the Galleria
1  Thank Monique00

We are so glad to read that you found our Galleria location to be ideal for your trip, Monique, and that you enjoyed our rooms and amenities. It is always our goal to ensure that our guests feel comfortable and at home while staying with us, and we apologize that our service fell short. We hope to have the opportunity to welcome you again and impress you even more the next time you visit Houston.


All the best,
The DoubleTree Team

Report response as inappropriateThank you. We appreciate your input.
This response is the subjective opinion of the management representative and not of TripAdvisor LLC.
Ashley G
11
Reviewed July 12, 2019
THE WORST.

Where do I begin. My husband, 5 month old baby, and dog had to evacuate from Louisiana because a hurricane was coming and we could not be without power for an uncertain amount of time with an infant. I booked A room on Priceline-which understand is not their fault- the room was advertised as double queen room-free WiFi, refrigerator. There were 2 options for this room-one non refundable and one flexible cancellation. I specifically chose the room with a refrigerator, free WiFi, and flexible cancellation because of our situation and the uncertainty of the track of the storm at that point. I needed A refrigerator to store my baby’s food and formula and a sink to wash her bottles. We drive 7 hours finally get into the room and there’s no fridge and no WiFi. I call The front desk. The MANAGER answers and i tell her I’ve been put in the wrong room. I explain I have A 5 month old and we need a refrigerator and i wouldn’t have booked the room Or spend more on this hotel for that matter for a room with no fridge. She rudely puts me on hold for FOREVER and the comes back and says i can Come show her downstairs. At this point it’s 8pm and my baby is sleeping. I said can someone come to the room i cant Leave my child-she proceeds to hang up on me. I call Back-she lets the phone ring and then connects me to another line that hangs up on me. So i proceed to go downstairs. Woman at the front desk who can’t bother to smile or say hello-after I’m crying to her that we’ve been driving all day evacuating from a storm with a baby tells me she can’t do anything bc i booked through a 3rd party i have to call Priceline. So i sit In a chair probably 10 ft away and call Priceline. Wait on hold for about 20 min. explain my situation...then the Priceline guy puts me on hold, calls the front desk and i literally watch the woman i was just speaking with answer and talk to him...and argue with him that free WiFi doesn’t exist at the hotel. She won’t do anything for me. He gets back on the line and apologizes and blah blah blah. So i ask To speak with the manager. She comes out and only wants to prove me wrong. Has no interest in helping me or my baby or people evacuating from a storm. I was So frustrated from getting the runaround i went back upstairs and called Priceline again. I got Another more helpful person on the phone who actually found the room i booked And sure enough it was supposed to have free IN ROOM WiFi and a refrigerator. The staff tried to tell me that room doesn’t exist and they only gave free WiFi in common areas. They also told me they were overbooked and there was nothing they could do-which was also a lie because the exact room i needed Was still available for booking online. All they had to do was switch me but wouldn’t because they wanted to be mean, rude, and difficult. The woman from Priceline tried to call the manager several times but she would not answer when she saw them calling!!!!!!! She didn’t want to hear what they had to say or that she was wrong. She would rather put out a family with a baby evacuating from a storm than be wrong. How absolutely disgusting and disgraceful for anyone in the hospitality industry. Also, the bathrooms are disgusting, old, and outdated. The elevators have about a 15 minute wait every time you want to use them and the staff is atrocious-with exception to the valet staff who were very friendly, professional and accommodating. Do yourself a favor and book one of the 200 cheaper rooms Houston has to offer. I wish I would Have read more reviews before i booked But we were in a bind to make plans. Apparently i am Not the first person to have problems with the arrogant incompetence who work here. If you don’t like your job. Get a new one. Let someone who wants it do a better job. Below i posted a picture of the room I booked they tried to tell me didn’t exist...only i paid $183/night for it.

We are very sorry to learn of your experience, especially during such a stressful time. We share our rooms and amenities with our third-party booking partners, and regularly audit them to ensure the information properly conveyed. We sincerely apologize if incorrect information was shared during the booking process, and please know that we will discuss your experience with Priceline to ensure that this is clearly stated going forward. We realize that this does not minimize your experience, and we offer our sincere apologies for the manner in which this was handled. It was not our intention to cause additional stress and rest assured, we have discussed this matter with our staff. We appreciate you bringing this to our attention, and, once again, we apologize for this experience.

Report response as inappropriateThank you. We appreciate your input.
This response is the subjective opinion of the management representative and not of TripAdvisor LLC.
donaldrstacey
Orange Beach, Alabama
1
Reviewed July 12, 2019
Assessment - Guest Experience

Other than poor quality of sleep due to very firm mattress, the experience was more than outstanding. Facility is great, location perfect for me to do business with my former employer located on N Post Oak Blvd; but most importantly, because of the staff support

Thank you, Donald, we are so glad to hear that our location and friendly staff made your stay a great one! We appreciate all of your feedback, and while we know that personal preference may be a factor, we will have our team evaluate your mattress to see if it does need to be replaced. We thank you once more for choosing to stay with us, and we look forward to welcoming you again soon.

Report response as inappropriateThank you. We appreciate your input.
This response is the subjective opinion of the management representative and not of TripAdvisor LLC.
View more reviews
PreviousNext
1…414243…