Where do I even begin... my partner and I came here for five fun-filled, unforgettable days. We didn't want to leave! Not only was our Casita beautiful, immaculate, and complete with breath taking views, but the entire staff consistently went above and beyond to ensure we were comfortable and satisfied. I cannot stress enough how special this little slice of paradise is. The locals are friendly and welcoming, the food is as fresh as humanly possible (my compliments to Chef Netty and Alex who served us some of the most delicious food I've ever had) and the beach is just a short walk from your room. Verdad offers many day-time activities. My partner and I enjoyed one of the most relaxing massages we've ever had, we went horse back riding on the beach, and he surfed almost everyday. I cannot recommend this place enough! It is truly a special place, and my partner and I will WITHOUT A DOUBT be coming back as soon as possible!More

Show less
Room tip: Literally all the Casitas are amazing, but if you're coming with a big group or a retreat I suggest Casa Verdad

Thank you Selina it was a pleasure having you stay with us!

Report response as inappropriateThank you. We appreciate your input.
This response is the subjective opinion of the management representative and not of TripAdvisor LLC.
See all 211 reviews
Nearby Hotels 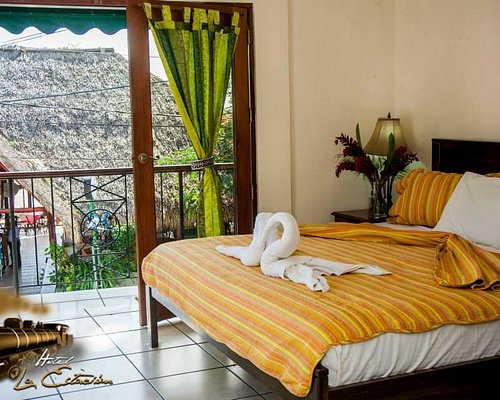 I cannot begin to express how enjoyable my experience was. I give the absolute highest praise and thanks to everyone at Verdad.. from Mark, Dylan, Alex, Neti, Charlie, Willy, Freddy...The list goes on...

The beach itself is breathtaking. A long stretch leads to a fresh water river just short of a beachside Ranch which offers fresh fish, local beer, and warm energy.

I cannot thank of a better vacation experience in my mind. i plan on returning as soon as I can.

Thanks Luca we are pleased that you enjoyed your stay with us!

Report response as inappropriateThank you. We appreciate your input.
This response is the subjective opinion of the management representative and not of TripAdvisor LLC.
Laura N
2
Reviewed January 17, 2018
Beautiful Views and Quiet Serenity

I did a retreat here with 15 people and it was really lovely. The dining room and open air deck have incredible views of the ocean. The architecture and design are beautiful, with lots of wood.

The walk to the beach is about 10 minutes straight down hill. Getting back up is a hike but they had a staff member come every sunset in a truck to take up back up the hill. The staff as a whole are very kind.

Hey Luara thanks so Much for the review please come back soon!

Report response as inappropriateThank you. We appreciate your input.
This response is the subjective opinion of the management representative and not of TripAdvisor LLC.
Kevin J
11
Reviewed January 16, 2018 via mobile
Untouched Paradise

Verdad at Costa Dulce was EVERYTHING I EXPECTED AND WAY MORE. If you want to travel to an untouched paradise come to Verdad. We stayed in Casita 2 and it was so beautiful and perfect. The staff was outstanding and the meals by the chefs Alex and Neri were amazing. My girlfriend and I are already booking our next trip! Thank you to the staff at Verdad for making our stay perfect! Thank you and come visit this beautiful place!

Report response as inappropriateThank you. We appreciate your input.
This response is the subjective opinion of the management representative and not of TripAdvisor LLC.
BenCurtisNYC
San Diego, California
1723
Reviewed January 15, 2018 via mobile
Excellent Place for Retreats!

Overall, I absolutely loved the place any highly recommend it.

I led a week long holistic retreat for musicians here. The place is only 4 months old and we were the first retreat of our size to be there (18 people). It was hard to get to and hard for our drivers to find, but if you let Verdad coordinate, they’re drivers can find it no problem. They could use some clearly marked signs and bigger vans thought.

The cabins are beautiful, the woodwork and views are stunning, and the grounds are clean and beautifully kept. It looks just like the photos. Not a bad room there. The staff (Dylan and Marc) took such good care of us, always going above and beyond with great communication. The kitchen staff (Nedi, Alex, Charlie and Junior) were spectacular and the food was to die for. Every single meal was delicious, locally influenced and made with love. Service with a smile.

If you’re a light sleeper, I would not recommend the first two cabins or pool rooms. The sound from the pavilion shoot right into the top cabins if anyone is walking around on the yoga floor, you hear it loud and clear. That being said the yoga Floor is stunning and perfect for any class including dance or Fitness. The cabins are great for couples but if you’re two individuals, someone will have to take the narrow day bed while the other enjoys a queen to themselves. This could be solved with some twin beds in some of the rooms. All of them have only fulls or Queens.

The pool is very small but great after a hot day in the sun. Loved the open bar policy there and they offered our group complimentary rum on many occasions. However if you’re not a drinker, this could be a little bit annoying as it encourages drinking. However I’m sure it’s very nice if you are. Definitely not a party vibe here though. Tranquil and gorgeous and quiet.

The only real downside is that it’s a good 10-15min hike down the hill to the beach and you walk through Costa Dulce retreat Center which seems to be a run down party spot. However Dylan personally offered us a ride up the hill at the End of each day (which you’ll want to take him up on because it’s a hike!) He also offered people a ride down each day.

The beach was nice and there is even a fish shack run by the local chef Nedi as well as a fresh water lagoon for swimming. Lots of tiny stinging jelly fish in the ocean which weren’t bad, just annoying. Could use a wet suit. Also there were zero waves for surfing on this beach. Would have been nice to know this in advance since we included surfing in our retreat. Costa Dulce also took all the boards so we had to rent boards from a third party which Dylan handled for us. However most of them were in poor shape and since it was an off site company, we couldn’t exchange them. Dylan did return the ones we didn’t want though. That was kind. If you want to surf, you’ll just need to hike 20min to Playa Yankee every day for anything surfable. Also good breaks there. Dylan personally picked us up each day and that made it even better. Just be sure to bring close toed shoes for these nature walks through brush.

The only other disappointing thing was the AirBnB Apartment that they arranged for our instructors (only because we were such a large group and didn’t all fit in the cabins). It was halfway down The hill and the error was also apparently arranged by Costa Dulce (Down the Hill). Marc and the staff at Verdad did everything to rectify the situation including moving their family out of a cabin, so that we could use it. The only confusing thing was that we were supposed to have that cabin in the first place.

All this being said, I’d definitely use this Verdad again. Once they iron out the kinks, it will be a 5 Star retreat Center for sure.

Hey Ben, Thanks for choosing Verdad, we hope to see you back again. January and February are 2 light swell months in Nicaragua, come back in March through December and our beach, Playa Escameca and Yankee will treat you to some challenging waves.

Report response as inappropriateThank you. We appreciate your input.
This response is the subjective opinion of the management representative and not of TripAdvisor LLC.
samayamartell
Southampton, New York
1
Reviewed January 14, 2018 via mobile
Nirvana

Verdad deserves no less than a poetic thesis as an authentic review, but I’ll keep it brief. From the exquisite beauty, splendid blending of nature, impeccable mastered zen design... to the fresh and local classic Nica cuisine, warm and friendly hospitality, spectacular ocean views and sunsets, and soothing sounds of gentle curling waves to lull one into slumber in sumptuous accommodations. In one word... Nirvana! I’ll be coming back!

Thanks for the review we are so happy you enjoyed your stay!

Report response as inappropriateThank you. We appreciate your input.
This response is the subjective opinion of the management representative and not of TripAdvisor LLC.
View more reviews
PreviousNext
1…313233…
<script type='text/javascript' crossorigin='anonymous' asy