Signature Inn Eugene
Signature Inn Eugene
Lowest prices for your stay
Lock in the lowest price from these sites
$119
Free cancellation until 11/06/21
Reserve now, pay at stay
View deal
Expedia.com$119
Hotels.com$119
Tripadvisor$119
Priceline
eDreams$119
FindHotel
View all 16 deals
Prices are the average nightly price provided by our partners and may not include all taxes and fees. Taxes and fees that are shown are estimates only. Please see our partners for more details.
Sally D
El Paso
5224

We were moving from Texas to Oregon. I got this hotel as a special on a travel website and we were SUPER disappointed. The room and the layout were strange - like two former smaller rooms were put together. I can't explain it - just odd. Anyhow, "breakfast" - if you want to call it that - was coffee and rolls in packages. Nothing was even made there. It was in the "lobby" - again if you want to call the space of about 5 feet by 10 feet a "lobby". The neighborhood felt unsafe to us as we pulled in. We did walk to a convenience store but didn't feel really good about it. I can't see this as a two star place - one star is a stretch. I wouldn't recommend it.More

Show less
Room tip: I would say to not get a room over the lobby

We apologize for your in convenience.
We are a low budget hotel.
Choice hotels only requires us to provide just coffee for our customers but we do go beyond their requirements.
Choice hotels do have upper end hotels that provide full hot breakfast.
yes we do have single rooms with two beds too and rooms within a room with two beds .
Most of our customers ask for those rooms.
And yes we are in downtown Eugene .
You may want to try upper end choice hotels in future.
Thank you.

Report response as inappropriateThank you. We appreciate your input.
This response is the subjective opinion of the management representative and not of TripAdvisor LLC.
See all 71 reviews
Nearby Hotels 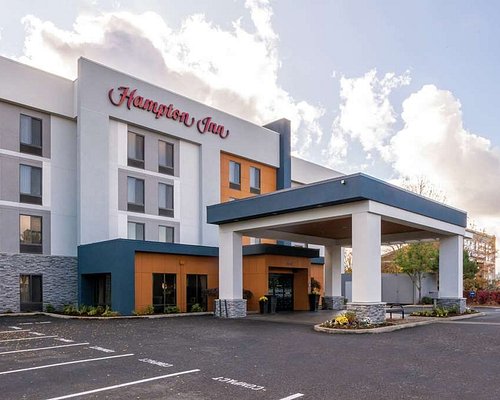 OK place to stay. clean rooms, very convenient, friendly front-desk. LOTS of great places nearby to walk to with lots of good restaurants.

the internet was like something from a by-gone era - maybe it's now time to seriously upgrade it?

Thank you for staying at the Rodeway inn.
We appreciate your business and feedback.

Report response as inappropriateThank you. We appreciate your input.
This response is the subjective opinion of the management representative and not of TripAdvisor LLC.
Michael J
Green Valley, Arizona
364119
Reviewed July 29, 2017
Reasonable Rodeway

Friendly staff at checkin and efficient. Room was mostly clean although there was a lipstick and a pair of footies under the bed when I checked for anything I might have droped. Bed was OK although an old mattress and box spring with lots of movement when I shifted my weight. Room was unique in that it had two double beds in two separate rooms, Parking is good. Breakfast was after I left, but it looked like it was coffee and maybe apples or something-there was only two chairs for the breakfast area.

This review is the subjective opinion of a Tripadvisor member and not of TripAdvisor LLC.
Michael T
Los Angeles, California
2111
Reviewed July 10, 2017
A friendly Motel

This is an ideal stop between Portland and Crater Lake National Park. We took a tour to the University of Oregon which is located in the city Eugene. The Motel staff are friendly and ready to help. The rooms are newly furbished.

Thank you for staying at the Rodeway inn in Eugene, Oregon.
We appreciate your business.we are glad to hear that you enjoyed your stay and we hope to welcome you back in future.

Report response as inappropriateThank you. We appreciate your input.
This response is the subjective opinion of the management representative and not of TripAdvisor LLC.
BajaBuddies2
Florida
289122
Reviewed June 27, 2017 via mobile
Very Noisy

I booked this hotel on line as a 2 star. It is a 1 star. It has nice redone rooms. The beds are Comfy, the pillows are a matter of opinion.
It is in an area of at least 3 hotels, 2 across the street. The road is Noisy and people next door Noisy, as walls are thin. It is an exterior, one level motel.
Breakfast was coffee, juice, cereal or prepackaged pastry. No toast or anything else, Sad for a supposed 2 Star hotel. We do not recommend this motel , and felt it was way overpriced. (Unless you are a very Sound Sleeper and Skimpy Breakfast will work for you)

This review is the subjective opinion of a Tripadvisor member and not of TripAdvisor LLC.
721henrya
Hays, Kansas
461119
Reviewed June 26, 2017
YES YES YES An honorable man!

I will tell about our problem, but first, the good about the room. We had a very nice room for this price range. When we saw it, we were excited to get to stay here. It had a nice fridge and microwave, the WiFi worked great, the room was very clean, roomy, and nicely furnished. There was no stale smoke smell, or odor of cleaning chemicals/perfumed odor cover-up products. It was a nice room at a bargain price for this area.

The day had been very hot and the room was a little warm, so the first thing we did was turn on the AC.

We contacted the office and the attendant came to check out the unit. He was unable to get it to put out cool air, either. The property was fully occupied, so he had no room that he could move us to.

He contacted us in a few minutes (after contacting the owner/manager) and offered to reimburse the cost of the room if we wanted to go elsewhere. By this time, it was getting pretty late and we could not find any other suitable lodging in Eugene, so decided to sweat it out in this room - literally. We ended up turning off the unit at about 2:00 am and opening the windows to try to get some cooler air in the room.

It was a miserable night with neither of us getting much rest.

When I went to check out, the owner/manager said "You are in room ####." I said that we were. He then made a great business decision (It is his business and his decision. so he let it be known or not as he chooses) that turned a miserable night into a wonderful morning.

It is always a privilege to meet and do business with an honorable man.

He said that the room had been occupied every night for a number of nights without trouble with the AC unit. I believe that to be true as the room had the feel of having been air conditioned when we entered it even though it was warm.

It was not his fault that our room was hot, but he took responsibility to do what he could to turn our miserable night into a good morning.

I would definitely stay at this location again if in Eugene in the future. An honorable man has earned my gratitude and trust.