Broken Bow
Search for "{0}"
Post
Trips
Tip: All of your saved places can be found here in My Trips.
Inbox
Log in to get trip updates and message other travelers.
ProfileJoin
Search

Wonderful getaway from the bustle of... - Hilltop Aqua Vista

“Wonderful getaway from the bustle of city life ...” 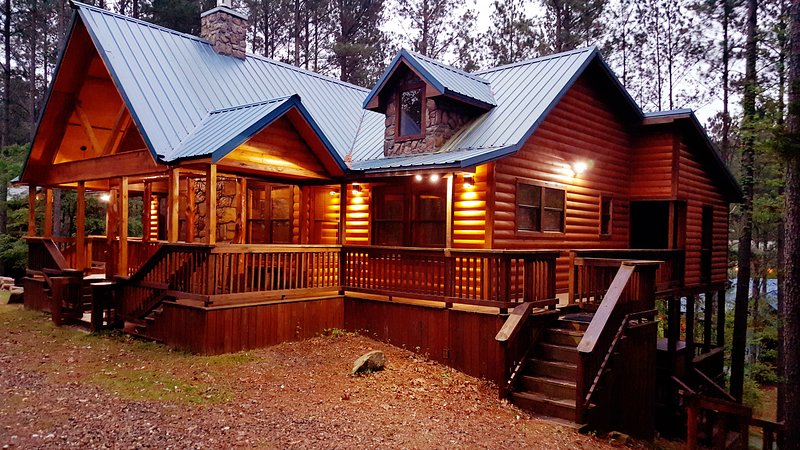 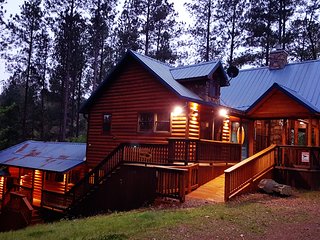 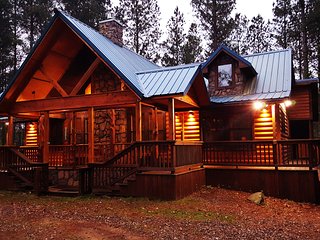 Very good - based on 14 reviews
Write a Review

We had a chance to stay at the Hilltop Aquavista. These wonderfully built cabins have everything you vould ask for. Well appointed rooms with attached bathrooms, clean well - stocked kitchen and decks all around. We chose to stay in one of the lower level rooms as we have kids. Apart from our room and bathroom there was a big shared area which had a pool table, wet bar and extra bunk bed. It was perfect for us !!!! It was very comfortable to say the least !!! A little world hidden in the woods ofBroken Bow. Would love to go back for a longer stay.

Date of stay: February 2017
Was this review helpful? Yes
This review is the subjective opinion of a TripAdvisor member and not of TripAdvisor LLC.
Problem with this review? Thank you. We appreciate your input.

10 helpful votes
“Wonderful Log cabin in the middle of swinging pines with a pond for Fishing”
Reviewed March 4, 2017 for a stay in February 2017

We stayed in two of these cabins at end of Feb 2017 for a weekend. We were 8 families. These newly built cabins are designed to have gatherings with family and friends. The bunk beds were fun for the kids. Very well kept, bathrooms were clean; kitchens have all the appliances you need. Activities were, all day fishing in the pond, waking around the woods, just relaxing with a good book in the porch, at the end of the day we got into the Jacuzzi. I am glad we didn't forget marshmallows for the bonfire. I surely want to go back soon as it is not very far from Dallas area.

Date of stay: February 2017
Would you recommend this hotel to a friend?   Yes.
Was this review helpful? Yes
This review is the subjective opinion of a TripAdvisor member and not of TripAdvisor LLC.
Problem with this review? Thank you. We appreciate your input.

1 review
“Great place to stay for that perfect weekend getaway”
Reviewed March 1, 2017 for a stay in February 2017

Nestled in the cozy hills at the edge of Ouachita Mountains, this place was the perfect getaway from our home in Dallas. The service was awesome, rooms and linens clean, good amenities and nice decor. Attractions and necessities (such as an Walmart grocery store) are at convenient driving distance. Would love to go back again for a longer stay.

Date of stay: February 2017
Would you recommend this hotel to a friend?   Yes.
Was this review helpful? Yes
This review is the subjective opinion of a TripAdvisor member and not of TripAdvisor LLC.
Problem with this review? Thank you. We appreciate your input.

Absolutely great luxury cabin with all the amenities, nice decor, spacious rooms - perfect for three families. We loved the scenic views. Location is ideal - close to everything. We enjoyed our relaxing stay. We plan to visit again in near future.

Date of stay: February 2017
Your age range 50-64
Would you recommend this hotel to a friend?   Yes.
Was this review helpful? Yes
This review is the subjective opinion of a TripAdvisor member and not of TripAdvisor LLC.
Problem with this review? Thank you. We appreciate your input.

3 helpful votes
“"Luxury?!" Far from luxury, or clean, or well maintained, management know's nothing about costumer service.”
Reviewed January 31, 2017 for a stay in December 2016
3
people found this review helpful

We have rented in Broken Bow for many years now and this cabin rental was the absolute worst we have ever stayed at and will never rental from them again. We aren't the type to complain or even write reviews but this was far beyond not saying something. We arrived to dirty dishes that had been put away in the cabinets, margarita mix still in the blender, the cabin was filthy, the "luxury sheets" had pee stains on them and there were not enough for the beds. A rodent had died in within the interior of the cabin, and while the manager did send someone out to look at removing it, they never resolved the problem and every time we turned the heat on the smell would get worse. This cabin doesn't sleep the amount of people that it states. One of the pull out sofa's bed was badly broken and unusable for your guests. We were short places to sleep. There were broken light fixtures that needed repair. When we first arrived we contacted the manager and numbers they leave for emergencies. No one returned our calls until after 11:30 pm and we were told, through text, that someone would bring more bedding in the morning! My husband continued to call first thing in the morning and we were told no one would be calling because they only respond through text. Things could have been handle in a professional manner had they called us. We asks to be moved into another cabin and/or a discount for the incipience and disgusting state of the cabin. We were told that if we were to leave within 10 minutes we could get our money back. We had a group of 12. That wasn't going to happen. They would do anything else. We will never rent from this company, let alone this cabin ever again. We suggested you not to also. Their lack of customer service, poor cleanness, state of disrepair, and awful way the situation was handle are plenty of reasons not too.

Date of stay: December 2016
Would you recommend this hotel to a friend?   No.
Was this review helpful? Yes
This review is the subjective opinion of a TripAdvisor member and not of TripAdvisor LLC.
Problem with this review? Thank you. We appreciate your input.

Spent the weekend with my family celebrating my 50th birthday and enjoyed the cabin. It was so nice I don't think I would want to stay at just any other cabin after staying here. We will return.

Date of stay: March 2015
Traveling group: Extended Family
Would you recommend this hotel to a friend?   Yes.
Was this review helpful? Yes
This review is the subjective opinion of a TripAdvisor member and not of TripAdvisor LLC.
Problem with this review? Thank you. We appreciate your input.

I would recommend others to stay here as well! We had a great time & will be going back!

Date of stay: October 2013
Liked best: The location & Hot Tube
Liked least: The LITTLE shower in the bedroom where the laundry room is - too small!
Traveling group: Friends
Your age range 50-64
Would you recommend this hotel to a friend?   Yes.
Recommended for:
Was this review helpful? Yes
This review is the subjective opinion of a TripAdvisor member and not of TripAdvisor LLC.
Problem with this review? Thank you. We appreciate your input.
Previous Next
1 2 3
Do you own a vacation rental? List it here.

Looking for a place to stay in Broken Bow?
View all 144 vacation rentals