“If you're looking for a rustic, charming, villa...”
aEdhXzVfQ3RQ
other travelers have booked this property 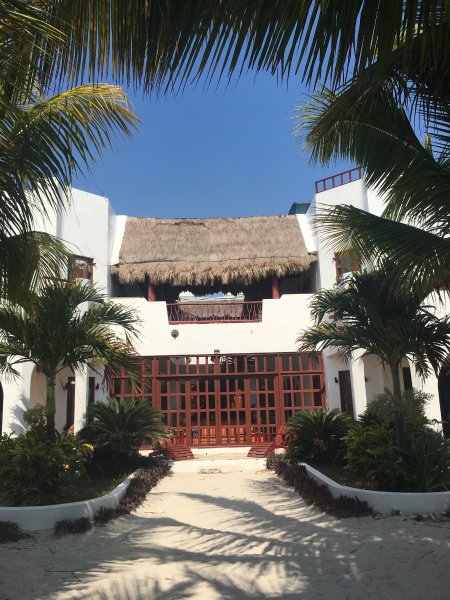 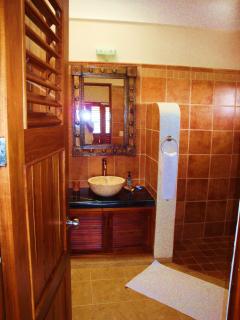 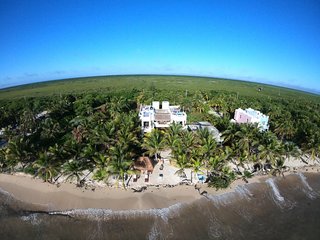 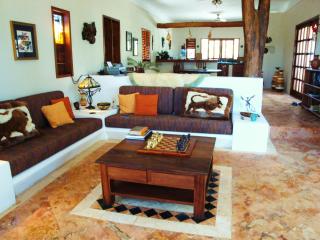 Very good - based on 13 reviews
Write a Review

This is in a very quiet location right on the beach. The amazing villa was perfect for our family of 7 and a baby. Although showing signs of tropical weather like warped sliding doors one couldn't complain as they are constantly working on maintenance. The caretakers are delightful,very helpful ( will even cook local meals) as is Joe the owner who is often on site . A car would be recommended for grocery trips and day ventures. We visited Bacalar and San Felipe fort and cenote, and Chetumal ruins. The crazy weather while we were there washed away much of the private beach but there was still room for sand castles etc. The snorkeling off the reef just out front was perfect on calm days. The kayaks available were great fun for riding the waves on the rougher days. The friendly resident cats were a bit of a problem for allergies but we kept them out with keeping our doors closed.
We'll be back!

Date of stay: November 2017
Would you recommend this hotel to a friend?   Yes.
Was this review helpful? Yes
This review is the subjective opinion of a Tripadvisor member and not of Tripadvisor LLC.
Thanks for the great review. Loved having you visit and look forward to seeing you again. And you are right - villa maintenance on the ocean with all the salt air is a constant issue, but we try to stay on top of it.
This response is the subjective opinion of the management representative and not of TripAdvisor LLC.
Problem with this review? Thank you. We appreciate your input.

This place is absolutely amazing. Private beach, just a 10 minutes drive to the cute little town of Mahahual (good shopping, scubba diving, ect). Our Veladors (Sandra and Emanuel) took such good care of us, making us traditional ceveche and cooking us FRESH lobster caught just earlier that day. Arranging for a professional masseuse to come to the house for Massages on the beach. Arranging for us to have a private day tour of the Mayan Ruins, Kayaking a gorgeous pristine lake of 7 colors and finishing the day with a pineapple plantation tour all with food and drinks included for a very reasonable price. After a few days of adventures the roof top dipping pool and tanning lounge was my favorite spot to just relax and enjoy the 360 degree view around the property, with the ocean to the east and the lush green jungle to the west. My mother and I stayed for a week and it almost just didn't seem like enough, I am going to come back and bring all the girls! I would recommend this place to every one of my friends and relatives.

Date of stay: November 2016
Traveling group: Other
Would you recommend this hotel to a friend?   Yes.
Was this review helpful? Yes
This review is the subjective opinion of a Tripadvisor member and not of Tripadvisor LLC.
Thanks for the great review. Look forward to having you visit us again.
Joe
This response is the subjective opinion of the management representative and not of TripAdvisor LLC.
Problem with this review? Thank you. We appreciate your input.

6 helpful votes
“NOT WHAT WE EXPECTED”
Reviewed December 4, 2015 for a stay in November 2015
5
people found this review helpful

the owner, Joe is a nice enuf guy but there was some very serious issues happening during our stay at this rental home.
1. Both water heaters blew before we arrived and there was no hot water for 2 days on the one side and 3 days on the other side.
2. The pots, pans, dishes and utensils were well used, battered, melted, rusted and generally of little use. I am sure they are dollar store brands as well as they were extremely flimsy. The non stick on the frying pans has very little non stick left. Hazard to your health. There were cobwebs and greasy film on the dishes when we arrived and everything needed a cleaning before we could use it.
3. We never had the place to ourselves. Joe stayed at the home the whole time we were there, using the facilities, slept on the couch at least once, helped himself to the ice, used his computer etc. He said he had a palapa in the back but it must not have any electricity, nor washrooms, etc.
4. He brought his friends thru the home, while we were there showing the units to them.
5. He continually came in behind us and turned the fans off while were there. My grandson was sleeping on the couch and he came in and turn them off even while he lay there sleeping. I had turned the fans on one morningthen turned the kettle on for coffee, left the room to get my phone and when I returned there was Joe in the fridge and had turned the fans off, again!
5. There were no drapes on the master suite patio doors. It was impossible to take a nap during the day, we were woken up in the middle of night several times during the first few days of arrival as there were several thunder/lightening storms coming thru. There was also the constant feeling of being exposed and therefore it was not a comfortable time in the rooms.
6. I had some concerns about the seagrass after hearing about it in the news, Joe assured us that it was no longer a concern and had been taken care of,,,,not!
It was impossible to keep up with it and to make it worse there was tons of garbage mixed in with it. Emmanuel cleaned it up most mornings but it soon piled up again.
We were a party of 10 adults, none of us would return and none of us would recommend staying here.
Sandra & Emmanuel are wonderful caretakers and were given an impossible job to keep up the place by themselves.

Date of stay: November 2015
Traveling group: Extended Family
Would you recommend this hotel to a friend?   No.
Was this review helpful? Yes
This review is the subjective opinion of a Tripadvisor member and not of Tripadvisor LLC.
For five years we have received nothing but excellent reviews from guests. During their stay none of the above was brought up by anyone - in point of fact when I asked how things were going those I spoke to said that other than a lot of rain they were very happy. The water heaters did go bad, however, we replaced both with new ones immediately the following day. We had almost constant storms that week with very large waves which of course brings in trash to any beach. We cleaned it constantly and when the storms let up the beaches were fine. I not only own but manage the villa and given the water heater problem and many questions from many in the group about things to do and where to eat I made my self available. I was often invited in to chat or offered a beer from members of the group. All the above complaints were made "after" they left giving me no chance to address them and were accompanied by a demand for a 50% refund of the rental. I provided a 16% refund due to the water heater problem and as a good faith effort to address the concerns that were all made by one member of the group that did not seem to represent the feelings of all that stayed. Look at my other reviews from multiple families over the years. If you rent long enough it is not possible to please everyone. It is interesting the review makes no mention of my providing a large refund based on complaints made after their departure.
This response is the subjective opinion of the management representative and not of TripAdvisor LLC.
Problem with this review? Thank you. We appreciate your input.

Date of stay: December 2014
Traveling group: Friends
Would you recommend this hotel to a friend?   Yes.
Was this review helpful? Yes
This review is the subjective opinion of a Tripadvisor member and not of Tripadvisor LLC.
Problem with this review? Thank you. We appreciate your input.

We had the most wonderful time at the Casa Que Canta! You have the greatest staff!!!!! I can’t say enough about them. They went above and beyond to make our trip one of the best we have ever had! Carlos took the fellows out fishing, they caught 6 barracuda which we ate. They were delicious. The guys had a ball out there, even though it poured rain for the last hour they were out, they still appreciated the time they had. Your home is beautiful, the grounds are spectacular and everything was just as it looked in the website we booked our trip on.
Sandra and Manuel’s children were home for Xmas vacation which was wonderful because we had children as well and they all got together and had so much fun, even the language barrier didn’t deter from the fun they had, from playing soccer, to water fights to just playing in the water and on the beach. It was especially great because our little 4 year old had more fun than he would have had, if it weren’t for the children being there. Christmas Eve on the beach was something that we will never forget! Singing Christmas carols, some in Spanish and most in English! I can’t say enough about this trip.

Date of stay: December 2011
Liked best: Location
Liked least: Long drive from Cancun
Traveling group: Family with Teenagers
Would you recommend this hotel to a friend?   Yes.
Recommended for:
Was this review helpful? Yes
This review is the subjective opinion of a Tripadvisor member and not of Tripadvisor LLC.
Problem with this review? Thank you. We appreciate your input.

White Bear Lake Minnesota
Reviewed September 19, 2011 for a stay in April 2010
2
people found this review helpful
Date of stay: April 2010
Traveling group: Family (extended)
Your age range 55-64
Would I recommend this vacation rental to my best friend?
Was this review helpful? Yes
This review is the subjective opinion of an individual traveler and not of Tripadvisor LLC nor of its partners. Tripadvisor performs checks on reviews.
Problem with this review? Thank you. We appreciate your input.

South Dakota
Reviewed July 20, 2010 for a stay in March 2010
3
people found this review helpful
Date of stay: March 2010
Traveling group: Spouse / significant other
Your age range 25-34
Would I recommend this vacation rental to my best friend?
Was this review helpful? Yes
This review is the subjective opinion of an individual traveler and not of Tripadvisor LLC nor of its partners. Tripadvisor performs checks on reviews.
Problem with this review? Thank you. We appreciate your input.
Previous Next
1 2 3
Updating list...
Do you own a vacation rental? List it here.

Looking for a place to stay in Mahahual?
View all 81 vacation rentals