This place has been amazing. Everyone friendly, helpful and they made our stay so wonderful. The building has a pool and a good view from the balcony. We spend most time at the beach and had lunch+dinner at different restaurants in this area. 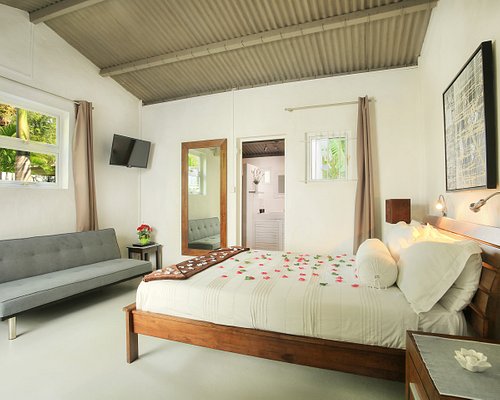 I did a late booking and my expectations were not very high ! However, my partner and were looking for a quiet place with an amazing view ! Upon arrival, we were well welcomed and the lady at the reception took good care of us.

The room was just WOW ! Spacious with bug balcony overlooking the sea. Breathtaking !

Dinner was fabulous ! Not a large variety of food though, but it was tasty.

We are looking forward to come back soon. Our expectations were met !

This review is the subjective opinion of a Tripadvisor member and not of TripAdvisor LLC.
Jennifer B
2
Reviewed October 7, 2017 via mobile
Good location

We stayed here for one week and have been really happy. It has a beach, pool, nearby restaurants and the rooms are clean. Our room has been on the beach side with a wonderful view. Staff has been really helpful and friendly.

Trip type: Traveled as a couple
Ask Jennifer B about Ocean Villas
Thank Jennifer B

This review is the subjective opinion of a Tripadvisor member and not of TripAdvisor LLC.
thecleofitz
Durban, South Africa
3
Reviewed October 5, 2017
Budget price - average hotel

There were good and bad things about this hotel.

it is not a terrible hotel and was appropriate for the 3 nights that we were there BUT the hotel is a little run down (though they are in the process of renovating the restaurant, The bar area is looking great). Things are a little shabby - from marked walls to towels that were clean but had seen better days.

It is fairly well placed - close to Grand Bai - about 200 Rupees by taxi.
We were booked in to one of the modern Pool View rooms which shares a semi private pool with 5 other rooms. The new pools are stunning and always clean. Pool View Room a lovely room and I thought it was great especially considering the budget.

The evening menu was very average, the food while completely edible was very bland. Breakfast was always good with excellent omelets. The service is very slow, with sometimes only 1 waiter on duty to serve drinks and clear plates. Which means it can take a while to get your drinks and even longer if you want a second. The staff often bring the bill even when you have not asked for it in their rush to finish up dinner service.

Employees dont have a proper uniform as they wear what ever they want, so it can be tricky to find some one for a drink or to ask for assistance. Staff also knock off at 10. So there is no staff to assist with anything later than that. We had an early morning transfer & we had to wake up the security guard that sleeps by our pool to collect our bags and take them (and us) out the delivery entrance! The staff, while pretty friendly, are very poorly trained and take no pride in customer service.

There is a little shop that sells food and drinks if you self cater or just want some extras, is very dirty & cluttered - I just turned around and left. We would just walk abut 1 km to the left of the hotel to a super market - there is a awesome Chinese seafood restaurant opposite that shop - just go through the little black door in the wall. It is well worth the walk.

They say there are water sports available include Speed Boat ride, Banana Boat ride, Skiing, Glass bottom boat ride and kayaking BUT it seems to be quite haphazard. Some activities happen on some days and then nothing on others. Also if there are 2 activities for a day, they tend to be at the same time so you have to choose when booking the day before. They only do them once in the morning and nothing after 11.

While our last minute stay there was pleasant I cant say I would go back.

This review is the subjective opinion of a Tripadvisor member and not of TripAdvisor LLC.
VaughnG
Johannesburg, South Africa
1727
Reviewed September 27, 2017 via mobile
What a mess, don't go. Has some good

In the beginning there were two that went to a "luxurious" hotel.

Then this happened.
The air port transfer great and we were collected on time and had a very pleasant drive to the hotel.

On arrival the reception lady did not even come out to welcome us more was there a porter.
We got inside and we were being explained on where things are, a group of people arrived that we're staying in the hotel and the receptionist got up to help them and just left us in the middle of the welcome.

At this time my wife and i were thirsty so i had a look round and found the "shop". Well well, we should have left there and then, see pic.
There is nowhere displayed the hotels star rating more the TripAdvisor logo.
Once the arrangements with the other guests was sorted the receptionist returned, we completed the intro and she took us to the villa's we were going to stay in.

The room was amazing, clean and comfortable, nice view and away from the rest of the hotel. (Maybe to far). At high tide you were stranded on your little patch, or you had to walk through the water. Not so good if your dressed for dinner. We only found out 4 days into our stay that there is a service gate at the back where we could go out a walk around to the front of the hotel. However to get the code to open it was a mission and were informed not to use it at night as it was very dark. But not dark enough for a GP couple, hi jacked twice shot at once.

The bar and Resturant were well, really in dire need of maintenance, PLEASE NOTE , the photos on there album are probably when it was just built.
The staff lucked in training and at night you were still having your coffee and the bill was put in front of you. There were times that i had to tell them that i was not finished with my evening yet.

The food was limited and the same day in and day out, with maybe one variable. Desert was the best out of it all.

As i said above the staff need training in all aspects of the hotel industry. The only good was house keeping and there was where we sadly, had the longest conversations.

The hole time we were there we did not see, hear or offered any excursions, funny enough the say you must report at the boat house for the water sports, still trying to find it. There were four loungers for 12 people and of those four loungers three were broken and did not adjust. That was just on our side. On the main beach there were no cushions for the loungers and those that had well, worn through.

We were centrally located to two local shopping malls and that is where we did our shopping of snacks and beverages.

The hotel beverage cost for ZA is very high, and no I'm not comparing with the Rand, in general its expensive. Even the local taxi drivers all know about Ocean Villa's as being expensive . And the worst thing of all they say its because its a Chinese owner and he does not care what you think about the hotel. This was too your encounter with him and his staff. The "shop" is shocking and the food just lays all over the floor. The "office" well is another sore point. Boxes pack on boxes, each room that had a bit of space was packed with stuff from tiles toilets and zincs. Just a mess.

We tried talking to the owner who sits in the shop, but he then goes on the language barrier approach.

The staff i feel are just there for the work. They don't smile or greet you, they will walk right over you or push between you to get where they are going.

As I've said before the photos on their album are when it first opened.

In my opinion i would not recommend this Hotel to anyone. There are better and cost just a bit more but it's worth it.

This review is the subjective opinion of a Tripadvisor member and not of TripAdvisor LLC.
Kenyan_Gallivanter
Nairobi, Kenya
209
Reviewed September 26, 2017 via mobile
Horrible horrible horrible!!

We had been scheduled to stay for 1 week here and 1 other week at Seaview Calodyne.

After only 2 nights I couldn't take it. We bolted to Seaview Calodyne.

I have never stayed at a more dingy,unkempt and dirty hotel in all in my 34 yrs of existence on this planet.

Cons:
1. The "beach" is nonexistent and probably the dirtiest beach in Mauritius. It is never cleaned and for the days we were there we didn't see anybody in the beach activities hut.

I also got pricked with a sewing needle as I walked and played with my kids on the "beach". That was the end of that.

3. Bugs all over the rooms. They kept falling on us as we slept.

5. Dirty towels ..basically everything was dirty and poorly maintained.

Add a few more coins to your budget and go elsewhere.

This place is a disaster!