Comfort Inn Staten Island
Comfort Inn Staten Island
Lowest prices for your stay
Lock in the lowest price from these sites
$151
$139
Free cancellation until 09/24/21
View deal
Expedia.com$139
Priceline$139
Hotels.com$139
eDreams$139
CheapTickets$139
Trip.com$151
View all 19 deals
Prices are the average nightly price provided by our partners and may not include all taxes and fees. Taxes and fees that are shown are estimates only. Please see our partners for more details.
Randy P
1

A visit back home

Larry, Crystal and Paaknesi were amazing when I came back home to visit my family. I would recommend this hotel to anyone. I will definitely be staying again next trip when I go back next month to visit again.More

Thank you for taking the time sharing your feedback online with us and others from your recent stay in Staten Island. We are so delighted that our security Larry, and friendly guest service agents Crystal & Pakwasi were amazing during your stay. We are so glad that you enjoyed our services and were able to be accommodated near your relatives. We look forward to seeing you your next visit to the island and hope to make your future stay even better than the last!

Report response as inappropriateThank you. We appreciate your input.
This response is the subjective opinion of the management representative and not of TripAdvisor LLC.
See all 393 reviews
Nearby Hotels 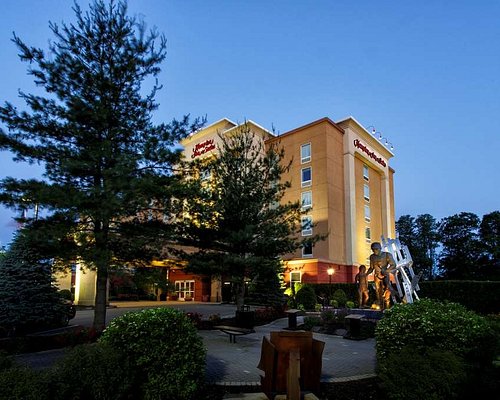 This hotel is exactly 2 star as they’re position itself. Very .. very small rooms, squeezed between each other , moreover hotel sharing place with 2 another hotels at same location . Literally, same entrance and then hotel 1 , hotel 2 and then comfort. Which is make you feel you in project area somewhere Elevator making noise for night long. Even worker who do underdoor night delivery for recept was talking on the phone nice and loud to entire walkway , 3am! I’ve sleep like 15 min per hour, it was longest night ...
I stayed there in December , for room 2 queen price was slightly above average but on summer season same hotel triple priced for same room ! Just because of NY ? Wow. So, once sun raised up I was run away . I have no test to use breakfast area. But for positive moment - bed was comfortable , or maybe me was so tired .

We appreciate you taking the efforts sharing your feedback with us and others from your recent stay. We want to extend a sincere apology that your stay did not meet and exceed your expectations. In regards to your comments, we tend to be a smaller property due to being in the NYC area oppose to other Comfort Inn properties. Staten Island is a quaint, suburban borough out of the 5 and particularly in our location we are a very quiet area which can either have a positive or negative affect on guests. Please know our security is monitoring the property 24/7 daily. We are so sorry to hear about the noise level and will be addressing this issue directly with the agent on duty. We are glad you were able to at least have a good night's sleep in a comfy bed. We hope you will give us another opportunity to prove that your stay was an exception.

Report response as inappropriateThank you. We appreciate your input.
This response is the subjective opinion of the management representative and not of TripAdvisor LLC.
Lanatravel2018
12
Reviewed December 9, 2018 via mobile
Customer service (Elisabeth) rude and unprofessional

Booked this hotel late evening and by mistake chose wrong dates. Realized it when arrived at around 11:30 pm, Some guy on reception was trying to help us and said they have two rooms available for us, but than this monster/nazi/receptionist came and in extremely rude manner and VERY loud voice start SCREAMING that she only has one room and there is nothing she can do for us, even online it was showing they have five rooms left. We had two seniors, in their 80s with us, exhausted after long day and this ....person... didn’t give a time of her day to even try to help or at least keep her voice down. Her name was Elisabeth (at least she said so) and I really regret not recording this nonsense. Hope someone will look in to it.

We appreciate you taking the time sharing your feedback with us and others. We want to extend a sincere apology that your stay did not meet and exceed your expectations. We will be addressing the issue regarding the guest service agent that was on duty during the time of arrival directly. We value this feedback in order to prevent future guests from experiencing the same issues.

Report response as inappropriateThank you. We appreciate your input.
This response is the subjective opinion of the management representative and not of TripAdvisor LLC.
Roving54697450684
11
Reviewed November 2, 2018 via mobile
LeRoy is the man!!

We checked into the comfort inn on 11/02/18 after a rough road trip. Leroy went above and beyond to help with with multiple issues I was having personally and with my stay. He is exactly what customer service is all about!! Thank you!!
Mike Petit

We appreciate you taking the time sharing your feedback with us and others from your recent stay in Staten Island. We are so delighted to hear our friendly front desk agent, LeRoy met and exceeded your expectations. We are all about our guests and providing them with superior service so we are glad that LeRoy was able to deliver hospitality after a rough road trip! We hope to see you again your next visit to Staten Island. Thank you again for your positive feedback, it does not go unnoticed!

Report response as inappropriateThank you. We appreciate your input.
This response is the subjective opinion of the management representative and not of TripAdvisor LLC.
tywwia
Washington DC, District of Columbia
6258
Reviewed October 20, 2018
Won't go again - too many problems

Stayed two nights and we won't stay here again, it was just not a pleasant experience. To be fair, the room, though small (Manhattan small), was clean on arrival. But there was no parking available. The lot is way too small, considering it supports THREE hotels. Parked in the lot across the street and hoped we didn't get towed. That was annoying, but not as as annoying when returning late the second night to find that the room was never serviced - unmade beds, no new towels, not cleaned at all. OK, someone missed. But the desk compunded the issue by claiming we left the "Do Not Disturb" sign up all day, which was patently false. A mistake is one thing - lying to cover it up is another. THAT was annoying - but not as annoying as when, at about midnight of the first night, security knocked on the door because they claimed that the room was supposed to be empty, no one had checked in. Not at all what you want to happen when you've checked in, it's late, you're (un)dressed for bed and you have to justify why you're in the room in the first place. Well, next time, we won't be in the room - we'll be in the Hampton Inn or the Hlton Garden Inn, or maybe across the river, because we;d rather pay the toll than stay here again. PS - at least one of the hotels next door shares not only the same miniature parking lot, but also the same management. Maybe both, i'm not sure, so we won't use them either.

Room tip: choose a room on a floor... in another hotel
Ask tywwia about Comfort Inn Staten Island
2  Thank tywwia

Thank you for taking the time leaving your detailed, and valuable feedback from your recent stay with us in Staten Island. We want to first apologize for not meeting and exceeding your expectations. We tend to be a smaller location given that we are in the NYC area. In regards to some of your issues, our parking is complimentary on a first come, first serve basis. When our lot will get crowded at the end of a busy night, our neighboring lot assists in overnight parking as well, which is secured by our overnight security. Groups with tour buses and tractor trailers tend to parking in the neighboring lot overnight to avoid using up multiple parking spaces. We want to apologize that housekeeping did not service your room, we will be addressing this issue directly with our department supervisor to prevent future guests from experiencing the same issues. We have also have addressed security knocking on your door late at night to the department supervisor as well, as we understand the extremity of this inconvenience. Your feedback is very valuable to us as we take your comments into strong consideration to train our employees better and to make improvements with our operations. We hope you will try to give us another opportunity to prove that your stay was only an exception.

Report response as inappropriateThank you. We appreciate your input.
This response is the subjective opinion of the management representative and not of TripAdvisor LLC.
btrish50
Pittsfield, Massachusetts
3
Reviewed October 13, 2018
comfortable stay

After being informed by family of issues at previous hotel booked, I was a little nervous. This hotel was perfect. The staff was very accommodating. The welcome bag of 2 waters and chips was the perfect arrival gift. Only issue was room was rather small

We appreciate you taking the time sharing your feedback from your recent stay with us. We are delighted to hear you enjoyed your visit with the help of our friendly, accommodating team. In regards to room size, we tend to be a smaller property given we are in the NYC area. We welcome you back and look forward to seeing you again in the future!