One of the best - Camp Hwange

One of the best

Camp Hwange was the highlight of our holiday. On arrival we were greeted by three elephants around the water hole located just out side the camp.

From then on we were treated with fantastic game viewing for the next 4 days. With excellent cat and elephant sightings and minimal vehicle traffic.

The best thing about this camp is the staff. The guides Alan, adam and washington went out of their way to help us see everything we wanted and Mellisa and all the staff back at camp made sure we were looked after and very well fed everyday. (Food was excellent).

Thanks all for such a memorable stay.

Trip type: Traveled with family
See all 247 reviews
Nearby Hotels 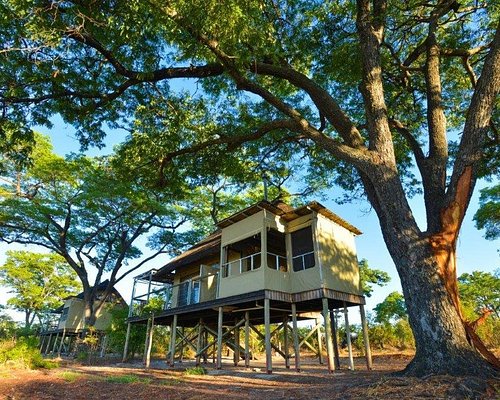 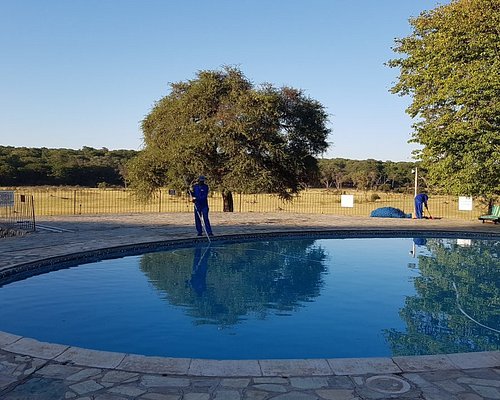 Absolutely fabulous camp. Awesome setting round the waterhole, very friendly and knowledgeable staff, nothing ever too much trouble. The guides truly set this operation apart as world class.

All the facilities are simple but brilliant, you cant beat sitting round the camp fire watching and listening to animals coming up to drink.

This review is the subjective opinion of a TripAdvisor member and not of TripAdvisor LLC.
Fenella P
London, United Kingdom
81
Reviewed September 6, 2018
FABULOUS

Camp Hwange is a very special camp deep in Hwange National Park. The setting is glorious in front of a waterhole. The staff are very attentive and we felt very spoilt. The food was delicious. Our guide, Julian, was extremely knowledgeable and we learnt so much. The combination of walking and drives really allows you to immerse yourself in the bush. We saw masses of wildlife including 40 different lions. We encountered leopard, hyena, jackal, followed a cheetah and tracked a male lion on foot. We loved every minute of it.

This review is the subjective opinion of a TripAdvisor member and not of TripAdvisor LLC.
JSunFla
53
Reviewed August 28, 2018 via mobile
WHOA! What a trip

This was by far our favorite stop on our trip. The staff was wonderful- greeting us with warm smiles after a cold bumpy ride to the camp. It’s deep into the park. Our guide, Julian, was spectacular. No sooner had we settled in for a relaxing pre-dinner cocktail on our 1st night when he hustles all of us onto the truck, in the dark. He heard jackals and jackals mean possible leopards. And YES! We see a leapoard within 1/2 mile of our camp. Lions, hippos, more elephants than we could count. Tracking animals on foot. Great stuff!

The accommodations were beautiful. The food fantastic every day. This is “GLAMPING” and we loved it. The tents look out to the watering hole. Anything could be here at any time. You CANNOT wander around after dark, but shine a flashlight into the grass and you’ll see lots of little bunny eyes. Maybe something bigger! Cold weather but a hot water bottle in your bed at night helps!

This review is the subjective opinion of a TripAdvisor member and not of TripAdvisor LLC.
H75travel
Epsom, United Kingdom
727291
Reviewed August 26, 2018
Superb: wished we had stayed longer

We stayed one night at Camp Hwange and wish we'd been able to stay longer. Unfortunately we only had time for 3 days of safari and wanted to see both Hwange Main Camp and Sinamatella: it was my husband's brithday in the middle and we didn't want to send his birthday travelling, so logistics meant we had just one night at Camp Hwange and two nights elsewhere. We so wish it had worked out the other way round. Our short time here was just magnificent, both relaxing and exciting at the same time, as we were able to immerse ourselves in Zimbabwe's nature offering in the most beautiful and hospitable of safari campls.

We travelled down from Vic Falls and met out transfer at the entrance to the park. We were escorted by the most wonderful guide, Spike, who was incredibly knowledgable and great fun. By the time we had arrived at Camp Hwange we'd seen so much that it felt like we'd had a safari already, having spotted loads of birds (much to my husband's delight), baobab tress, buck and a herd of elephants at the nearby watering hole. We arrived for a late lunch which was wonderful, eating overlooking the watering hole and the savannah. After relaxing for an hour or so in beautiful surroundings it was time to head for an afternoon/evening game drive with our guide, Washington, along with another two other guests who were sharing our jeep. Heading to a watering spot we found some rarely spotted bird as well as hippo and then drove around some more seeing elephants, jackal, giraffe and zebra. We stopped for a gin and tonic sundowner (magical) before heading back for dinner.

Dinner is served around one big table which I had mixed feelings about at first, but it was really sociable and fun. The table itself is beautifully decorated (as the rest of the shared space - I would have happily had most of the art in my house) and the staff wonderful. The food itself excelled my expectations and the starter of a corn fritter was so delicious. Wine was flowing as were the laughs.

After dinner, as we were having a digestif and chatting with Dave the owner, there was word that there were two unfamiliar male lions wandering close to camp. Dave asked if we wanted to join him as he went to check them out - how could we say no?! So back in the jeep we jumped and tracked down the young male lions. It was exhilarating to follow the beautiful animals as they wandered along the paths in the moonlight (we hardly needed a torch), smelling the grass and the wider bush. We must have been tracking them for over an hour before they dissapeared out of sight. We were so lucky to have experienced this - truly life affirming!

Slept really well in our comfortable and well decorated rooms, but we needed to get up early to squeeze in a short safari before heading to our next camp. Breakfast was delicious and generous. While it was a quiet morning for game we still saw a huge herd of of buffalo and some more zebra in the beautiful morning light. We then headed off for our next lodge, which was a long day's drive. If we had more time we would have loved to have joined a walking safari following lions but it wasn't to be - but hopefully we will be back!

Final word - if you need internet, local sims don't get a good reception so you'll need to buy internet cards.

This review is the subjective opinion of a TripAdvisor member and not of TripAdvisor LLC.
DylanLeeds
148
Reviewed August 26, 2018
Best Safari Ever

I have been on safari in S Africa, Kenya, Tanzania, Botswana and Zambia, but my recent trip to Zimbabwe was the best I have ever experienced. This is in no small part due to the exceptional staff at Camp Hwange. Genuine enthusiasm, none of the fakery you get at many high end places. It is staffed by people who love being there and want to share their excitement with their guests. Our guide Adam is the best we have ever had, fantastic knowledge shared brilliantly. A superb tracker with a feel for animal's instincts and next moves. Kim runs the camp with joyful efficiency. Hwange itself is quiet and seems to attract nice engaging fellow travellers. Camp Hwange has exclusive use of a large area which means sightings are special and often solitary. In three days we saw, many lions, leopards, a magnificent cheetah, giraffe, painted dogs, hyena, porcupine, honey badgers, hippos and hundreds of elephants.

This review is the subjective opinion of a TripAdvisor member and not of TripAdvisor LLC.
View more reviews
PreviousNext
1…567…42