Once in a lifetime experience everyone... - Thornybush Game Lodge

$1,186
View deal
Hotels.com$1,186
Priceline$1,194
CheapTickets$1,186
Booking.com$1,197
Orbitz.com$1,186
Travelocity$1,186
View all 12 deals
Prices above are provided by partners for one room, with variable occupancy rules as provided by the property, and do not include all taxes and fees. Please see our partners for full details.
Seth M
Tel Aviv, Israel
22

Once in a lifetime experience everyone should do

We enjoyed the entire experience at Thornybush. The Manuana Lodge provides an intimate experience. Our guide and tracker were excellent. The food was great and the service (even doing laundry) was fantastic. The lodge is situated near a watering hole so as we ate, were joined by giraffes and other animals. One feels the pride and love of all involved. We saw other lodges where outdoor showers, meeting space and spa services are provided.

Room tip: The honeymoon suite was outstanding.
See all 548 reviews
Nearby Hotels 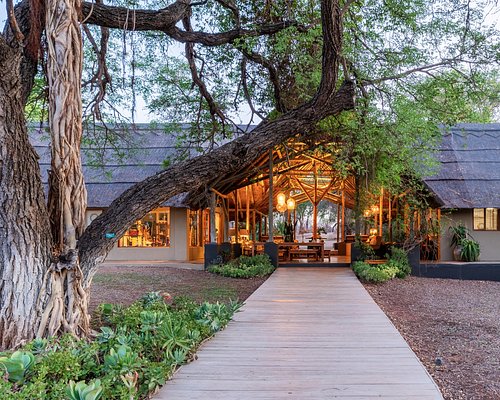 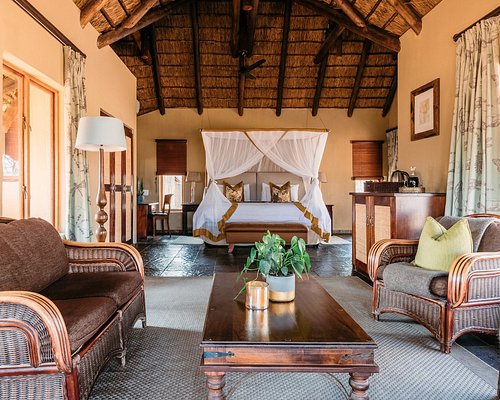 We visited Thornybush Game Lodge after the lodge donated 2 nights to the Game Rangers Association of Africa. We bid and paid for the nights through a charity auction and our money went into training two rangers - thanks to Thornybush!!

The experience itself was magical. The lodge is beautifully appointed and the rooms are spacious with views overlooking a dry river bed, large bathrooms and a massive bed. The outside shower meant that we could shower under the stars or cool off under the hot African sun. We stayed in room 14 which was quite and private. The food was delicious and probably better than most lodges we have stayed in. Glory was our butler and she was absolutely wonderful - helpful at every turn. Our wonderful ranger Joe and his tracker made sure we saw the big five and the illusive wild dog!! Joe has a wicked sense of humour and kept us all entertained!

Room tip: Room 14 was great but ask before you book - there seemed to be some construction work happening to some of the rooms
Ask Scamp1307 about Thornybush Game Lodge
Thank Scamp1307

This review is the subjective opinion of a Tripadvisor member and not of TripAdvisor LLC.
KurtsGlobe
Seattle, Washington
6529
Reviewed February 6, 2017
Beyond my expectations in every way, adventure and luxury, conservation and privilege

We recently returned from a three day photo safari in South Africa with Thornybush lodge and it exceeded any expectation I had. I was a little skeptical I was going to a giant zoo. It's not. If you call it a wildlife reserve or conservation farm ok but the animals are on their own to feed and eat each other. Yes, the animals are use to people but it doesn't interrupt their hunting or activities. It is amazing to see these animals in the wild. The giraffes were my favorite. The camp is lux, the jeeps are new the guides very professional, and the stone cottages , linens , and second outdoor shower all very special if you don't mind baboons spying on you. The service was very accomadating. We only had up to six in our jeep although some lodges put 10 in a jeep plus the guide and front tracker. We did two 3 hour drives per day, dawn and dusk. We had one breakfast in the field and one wine tasting off the front of the jeep. We saw a lion pride , rhinos, leopards, herds of animals. I would recommend this trip to anyone. A fantastic experience and great education. We stayed at a good hotel the Contential, at the Johannesburg airport and flew to the airport at Kruger and hired a driver to the lodge.

This review is the subjective opinion of a Tripadvisor member and not of TripAdvisor LLC.
mehorst
Denver, CO
5332
Reviewed February 4, 2017
Safari experience

My wife and I traveled with another couple and spent 3 nights at Thornybush Lodge and I can't begin to say enough good things about it. The staff were all friendly and helpful, the accommodations were spectacular (my wife particularly loved the outdoor shower) and our safari guide and tracker (Jack and Ishmael) were great. We saw all of the Big 5 and quite an assortment of other animals, and a wide variety of birds, all of which Jack could identify. My wife enjoyed an excellent massage which was very reasonably priced. I got a kick of coming back to our room after lunch to find baboons on our deck. I have no hesitation in recommending Thornybush.

Room tip: All the rooms are in individual cottages and feel very private. I can't imagine there is a bad choice.
Ask mehorst about Thornybush Game Lodge
Thank mehorst

This review is the subjective opinion of a Tripadvisor member and not of TripAdvisor LLC.
newmexone
Thornton, Colorado
334283
Reviewed January 28, 2017
Outstanding Safari Experience

We spent two nights at Thornybush Game Lodge and loved the experience. The rooms were great and we learned how lucky we were to have air conditioning as our other stops did not have that amenity. Given it was rainy season when we were there, not having air conditioning meant difficulty sleeping in high humidity and having everything you own feel damp. The rooms were nicely appointed and made for a comfortable stay even though we were so busy we didn't spend much time in our room other than for sleeping.
We had been in Kruger National Park 13 months earlier and thought we had seen a lot of animals, but the experience at Thornybush was much more spectacular. Both Jack, our ranger, and Ishmael, our tracker, were truly excellent at their jobs. Our two daily safaris - 5:45AM and 3:45PM allowed us to see an incredible number of animals. The only Big 5 animal that eluded us on our last trip was the leopard. On our first safari, we were lucky enough to get to see a leopard enjoying a recent kill. As this is a private reserve, safari vehicles are allowed to go off road and that is where a good number of animals can be found. We saw several different prides of lions and the one male that resides at Thornybush. Again because this is a private reserve, they make sure that the animals are treated with respect by doing things such as only allowing two vehicles at a site at one time. There was great communication between the rangers and they were able to find animals that were well off the beaten track. The safari experience was definitely enhanced by a break for coffee/tea and snacks mid-morning and stopping for drinks and watching the sun set.
Food at the Lodge was very good and there was a wide enough selection to suit even a picky eater (and we had one in our group.) The staff was great and our butler, Godfrey, provided exceptional service. We stayed at 3 lodges during our visit to Africa and of all of them, Thornybush is definitely at the top of my list.

This review is the subjective opinion of a Tripadvisor member and not of TripAdvisor LLC.
Hugh W
Ipswich, United Kingdom
61
Reviewed January 20, 2017
Pure Luxury

Fantastically luxurious lodge with all amenities, a spa, a pool, outdoor showers overlooking a watering hole and staff that are always on hand to help. The food is excellent and the rangers and trackers incredibly knowledgeable on all the flora & fauna. So many majestic animals all up very close and personal. Experience of a lifetime.