Most amazing honeymoon ever

My wife and I stayed here on our honeymoon and I cannot give enough praise. The location is amazing and the light aircraft flight to get there is a wonderfull experience in its self. The staff are very welcoming and cannot do enough, we arrived to the sight of two elephants and a hippo at the watering hole that the lodge is situated directly upon. The food is incredible and the chef even spoke to my wife every afternoon to make her any variation on the menu she desired as she doesnt eat red meat or dairy. The game drives are so much more than we could have imagined, with one in the morning and one in the evening we saw the big 5 every day. Our guide named Suprise was so knowledgeable and very funny, he was teamed with our tracker Howard who spotted anything that moved from great distances. The bar is well stocked and fairly priced, all elements of service are top quality and we could not have asked for more.More 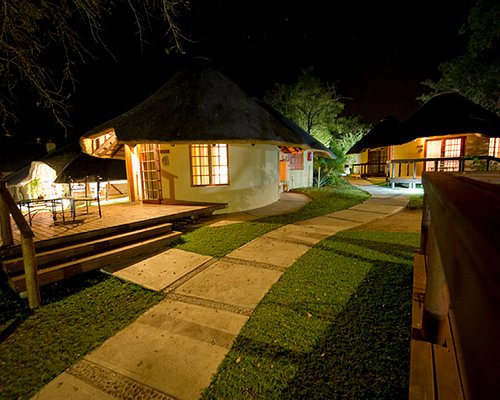 We started our honeymoon at Chitwa Chitwa and had an amazing time there. It was ideal for couples - there was the opportunity to mix with all the others at meals and at the bar etc., but we all had the chance for our own independence as well. The food was incredible - a lot of it, with 4 courses at dinner and 3 courses at lunch - but it was cooked and presented so well. Safaris were amazing, we got to see all the big 5 and so much more, including chameleon, civet, mongoose.. the list goes on. The rangers were so knowledgeable and they took every off-road route possible to get us close to the animals. The only negative I'd say is that Chitwa need to make it much clearer when indicating which drinks are included as part of the package and which aren't. We asked several times and were advised that imported drinks weren't included, but South African ones were. Also, the minibar was apparently available to us with the same terms. At the end, though, we found that the SA drinks like Amarula and so on, weren't included in the rate, and we'd also been billed for various top-notch brandies without realising we'd been drinking them. In spite of all this, though, the management agreed to knock off anything we felt we shouldn't have to pay for. It's worth them looking at this for the future, though, to avoid any confusion.

The location of Chitwa is second to none - everything everyone says about waking up to the sounds of the hippos etc. is absolutely true. It's an incredible experience and one we'll never forget. The only thing to remember, though, is take them seriously when they say not to walk around the lodge after dark unless you're escorted... the animals really can roam freely and you don't want to find yourself confronted by a leopard on the way to the bar, like one of our rangers was!

Thanks Chitwa for all you did :to make our honeymoon amazing :-)

This review is the subjective opinion of a TripAdvisor member and not of TripAdvisor LLC.
cliveandcatherine
london
33
Reviewed August 28, 2010
Fabulous in every way

I was born and brought up in Kenya and have been on safari with the family a few years ago so I know what safari is all about. I am in South Africa on buisness once per month for a week and so we tagged a 4 night safari on to the end of the August trip. Chitwa Chitwa is situated in Sabi Sands, which is a private reserve near the Kruger National Park. Comparing Sabi Sands with the Masai Mara or other such game parks that I have been too can be taken down to pros and cons. When we were in Chitwa we saw everything....literally! (Dont expect to see wild dog or cheetah though, so I suppose that is not everything. (leopoard up a tree with her lunch, lions male and female, lions eating a buffalo, and all the other usual animals such as Rhino and Elephant. If you stay at Chitwa you see crocs, hippos, fish eagles which are resident in the dam, along with all the other animals that pass by for a drink. So game viewing was fantastic in the Sabi Sands Game reserve. I have however been spoilt when I was younger and was used to not only game to have a look at but also breathtaking landscapes to accompany the views and this (in my opinion) did not exist. This is not a complaint in any way, but Sabi landscape does not even compete with landscapes in Kenya and Tanzania. If you want to see Leopard go to Chitwa because its almost guaranteed. We saw 5 different leaopards in 4 days.

Chitwa Chitwa is a fabulous lodge, the decor is varied from traditional to contemporary with the large luxurious bedrooms furnished to a very high standard giving a very cosy and homely feel. Food was fantastic as was the service and the staff. We were looked after by fabulous guides and drivers. I would easily reccomend this to anyone if they want to safari in South Africa.

This review is the subjective opinion of a TripAdvisor member and not of TripAdvisor LLC.
christy2064
Oakland, California
141219
Reviewed March 12, 2010
very luxurious

this is a VERY nice lodge in the Sabi Sands reserve. The rooms are HUGE and very luxurious.
The service cannot be beat, the staff is more than accommodating. The food was very good.
We had room 5, closest to the lodge. I have enclosed pictures. It was larger than my home.
The game viewing was very nice here also. You have your own pool and the lodge has a main
pool also. The property overlooks a pond so you can see animals in there and around it drinking, etc.
I would definitely recommend this property to anyone who wants to be spoiled.

This review is the subjective opinion of a TripAdvisor member and not of TripAdvisor LLC.
UkV_m
UK
37
Reviewed February 16, 2010
Amazing safari and brilliant lodge

We searched for a very long time before deciding to stay at this lodge and we have no regrets. The safari's are amazing, you will def see lots of animals. The location, set on a dam, is just awesome as you listen to hippos roar all night long. The food at the lodge is first-class and there is real pride taken when they are serving you. The staff are very friendly and welcoming. All in all, it is a great safari and we strongly recommend it.

This review is the subjective opinion of a TripAdvisor member and not of TripAdvisor LLC.
Ron_andante
Singapore, Singapore
1013
Reviewed December 7, 2009
Beautiful lodge, lovely staff with very minor issues.. but still, it was an awesome choice!!

The first day at Chitwa was my birthday and my bf had informed the staffs about it. They made a very special arrangement for us to have a private dinner in the boma with a bonfire & candles and IT WAS SO PRETTY!!! I even had a home baked chocolate cake & the staff sang and danced too... most romantic birthday i had definitely!!

Game drives were awesome, we were really lucky and had a cheetah at the watering hole when we arrived.. a very rare sight! And we even tracked a pack of wild dogs! Only pity there was no lion in the area for the whole 4 days. Rangers were good and even accompanied my bf to do his little run in the safari with a jeep following behind.

Lodge was gorgeous and the room was very nicely decorated.. we could very much live there...but as it was a sandy walkway to the door entrance, quite abit of sand was carried into the lodge by possibly previous guests. For some strange reasons, that wasnt vacuumed when we checked in and we had to walk around the room with bedroom slippers the whole time.

Lastly, food was the least enjoyable for the whole trip. Lunch was more "african" and possibly didn't suit my taste buds. Breakfast's bacon was perpetually burnt & rock hard.. Dinner settings were always very nicely done and very enjoyable as we were fortunate to have good company from the other lodge guests.

This review is the subjective opinion of a TripAdvisor member and not of TripAdvisor LLC.
View more reviews
PreviousNext
1…858687…108