$47
$38
View deal
Free cancellation until 11/05/21
eDreams$47
Expedia.com
Travelocity
View all 12 deals
Prices are the average nightly price provided by our partners and may not include all taxes and fees. Taxes and fees that are shown are estimates only. Please see our partners for more details.
andreabC3043PP
96

Stay for diving. It's like villa complex, w 2 pool. Room is clean, coazy, big, modern and comfortable. Breakfast is good but long time waiting. I suggest y order it long before. Staff are friendly. Diving facility is awesome. Its 30m from uss liberty wreck infront. Recomended.

Trip type: Traveled with family
See all 210 reviews
Nearby Hotels 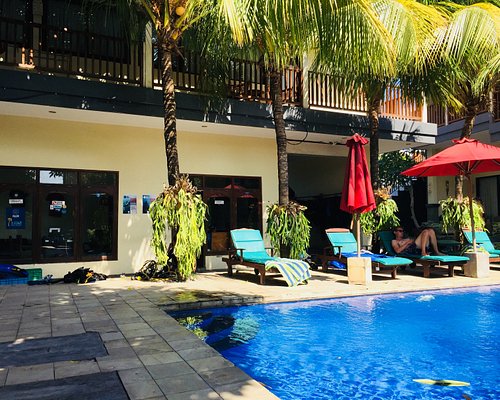 The place was 98% vacant when we visited. Wifi was not reliable. We lost power multiple times. Lots of stains on the bedsheets. When I tried to pay for the miscellaneous using my credit card, their machine didn't work.

This review is the subjective opinion of a Tripadvisor member and not of TripAdvisor LLC.
LoveTravelUkr
Kyiv (Kiev), Ukraine
113
Reviewed January 26, 2017
Good for dive staying!

We droped this place with big diving group for the second time and it was great again!
Hotel have 2 levels with a pool on each level. We stayed in Standard Rooms on the higher level - they are big and nice renovated. AC is working fine. WiFi working stable. Water in the pool near our rooms was clean and not cold. If you like massage - it possible to have it too.
Food was good, indonesian cuisine. If you are diving - this day you have divers lunch included. But in the day time simetimes a lot of unknown divers staying in restaurant.
Diving was very nice! USS Liberty is the home reef, 1 minute by walk form diving center. Diving stuff is pretty good underwater, they will show you everything! If you like muck dive or you are underwater photografer - you will not be dissapointed. They make dives in a different place.
Will come back again for sure!

This review is the subjective opinion of a Tripadvisor member and not of TripAdvisor LLC.
Endang A
31
Reviewed December 15, 2016 via mobile
Nice & Comfort Place

Comfort room with fresh air and sunlight. One building for one room, give a privacy to take some rest after diving or snorkling.

The hotel is near to the Liberty wreck, and also not too far from main road, where we can buy some needs in the minimart or local food and fruits in the small shops.

The hotel provide diving lesson, guide and equipment, and also snorkling. There is motorbike rent too in the hotel.

Trip type: Traveled with family
Review collected in partnership with ASUS 6 Stub App Smartphone
This business uses tools provided by Tripadvisor (or one of its official Review Collection Partners) to encourage and collect guest reviews, including this one.
Ask Endang A about Ocean View Dive Resort Tulamben
Thank Endang A

This review is the subjective opinion of a Tripadvisor member and not of TripAdvisor LLC.
fle0w
Singapore, Singapore
25
Reviewed December 12, 2016
Staff and manager unhelpful when we lost money

We visited Tulumben for diving and stayed at a family room at this resort. The family room was quite far in the resort (note to those who want to carry gear), but the room is spacious, toilets relatively clean. The pipe at the sink broke and one of the lights blew, but they managed to fix it relatively quickly. Towels sometimes had dirt marks, but nothing major.

The food at the restaurant was less good – we had three meals there, service was very slow and most of the time the staff seemed annoyed that we were even there to order anything. When we wanted to borrow a wine opener, they also gave us one that was broken...

They are quick at collecting money though, and will follow you around to ask constantly when you want to settle the bill. Would suggest not putting the room spending on a tab to avoid this. They were also always asking if we needed a massage – once we were woken up while napping by the pool to ask if we needed a massage.

What we were most unhappy about was when we were advised to leave our belongings (including they money to pay for a trip) at an area at the resort while we went on a dive. When we returned, we had lost USD$700 and around another SGD$100 worth of Rupiah.

However, the police officer did not speak English. Long story short, we were told to return to the hotel and wait for the police to come and see the manager. At which point we had no idea what was going on and the resort staff collectively ignored us and all of a sudden couldn't speak English and we could never figure out if what we had said was ever communicated to the police.

When the manager finally arrived somewhere within an hour later, he explained:
- If we make a report, we will need to be able to return to Bali anytime the police want to do any questioning for the investigation (we said ok)
- If we make a report, it is done on a computer, not on a paper and and as such we will not be able to have a record/case number etc printed out or told to us. So we will have nothing to confirm we have made a statement until they close their investigation in months (we said we could risk it)
- If we make a report, they can't do it at their police station, we need to go to a different one further out, and make an appointment to make a report. this can take a few days to a few weeks
- The resort does not believe we have a right to make a report as it makes them look bad
- The manager would not be our translator if we were to make a report as he is "involved" in the situation, he would ask our dive guide (despite that the guide who saw the money being kept is technically involved in the situation) to help us translate – this being the dive guide that showed up unasked at the police station and also suddenly, couldn't speak english besides saying to go back to the resort.
- If we change our minds, we are unable to make a report unless they escort us there

Basically, they found lots of reasons to deter us from making this report, despite us saying each time that it was fine, we wanted to go ahead. We finally gave up to think of other solutions, and they resumed asking us multiple times to confirm we would be checking out and to settle the bill – in perfectly understandable english.

This review is the subjective opinion of a Tripadvisor member and not of TripAdvisor LLC.
Soverdam
Capelle aan den IJssel, The Netherlands
8724
Reviewed December 3, 2016 via mobile
Ok resort, not great

Stayed here for 3 nights because we wanted to dive on the liberty wreck. We did not dive with the hotel diveshop so no experience with them. Location to the wreck is very good, you can walk to entree point if you have your own stuff.

Room itself was not very clean. In the evening don't leave the outside light on or your ceiling will be crawling with bugs ( our mistake ). Bathroom also not very appealing. Not essential, but no tv. Wifi worked well.

Breakfast was ok, some days faster then other days, but tasted good and you had some options.