$262
$222
View deal
SAVE $40
Hotels.com$225
FourSeasons.com$225
ZenHotels.com$262
View all 19 deals
Prices are the average nightly price provided by our partners and may not include all taxes and fees. Taxes and fees that are shown are estimates only. Please see our partners for more details.
RTM2289
Kansas City, Missouri
23890

I really enjoyed my stay at the Four Seasons Hotel Las Vegas. The rooms are spacious and beautiful decorated. The bed and room overall was very comfortable. My view has a partial view of the strip but most of my view faced the airport. The Four Seasons is essentially part of Mandalay Bay. It's separated in some ways as it has it's own small lobby/check-in area and bar. However, guests can access the Mandalay Bay through the casino level. I would love to stay here again someday and would recommend this hotel to other travelers.

See all 5,383 reviews
Nearby Hotels 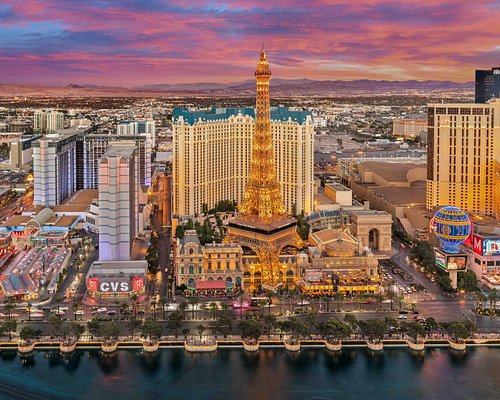 Normally I stay at the Mandalay Bay for my yearly trade show. This year I decided to try the Four Season to hopefully have a better experience. It was great. It was nice to get away from the madness of the gambling floor at the Mandalay. The 4 Seasons is just a more refined experience from the quality of the room to a more intimate dining experience fro breakfast and dinner.

Review collected in partnership with Four Seasons
This business uses tools provided by Tripadvisor (or one of its official Review Collection Partners) to encourage and collect guest reviews, including this one.
Ask Ronald L K about Four Seasons Hotel Las Vegas
1  Thank Ronald L K

This review is the subjective opinion of a TripAdvisor member and not of TripAdvisor LLC.
annt583
Haddonfield, New Jersey
21
Reviewed January 27, 2018
Conference in LV

Beautiful hotel located high above Mandalay Bay casino. Good location for walking on the south end of the strip, Excellent service from arrival to concierge, to bar, to meeting rooms. Easy access to shows and night life.

Review collected in partnership with Four Seasons
This business uses tools provided by Tripadvisor (or one of its official Review Collection Partners) to encourage and collect guest reviews, including this one.
Ask annt583 about Four Seasons Hotel Las Vegas
1  Thank annt583

This review is the subjective opinion of a TripAdvisor member and not of TripAdvisor LLC.
mike579
Atlanta, Georgia
33
Reviewed January 27, 2018
over priced, needs a refresh

We stayed for 5 nights. It was a nice stay, but I would not pay the four seasons price for this somewhat old and tired hotel.

I called the conceirge for advice on travel from airport to hotel, (about 2 blocks) and was offered a $100 limo ride rather then the courtesy of the hotel car. Poll was not available, but 39 dollar resort fee charged. Peeling wall paper from walls, grout missing from bathrooms. This hotel needs a refresh.

Review collected in partnership with Four Seasons
This business uses tools provided by Tripadvisor (or one of its official Review Collection Partners) to encourage and collect guest reviews, including this one.
Ask mike579 about Four Seasons Hotel Las Vegas
1  Thank mike579

We appreciate you taking the time to write a review following your recent stay. We are sorry for the disappointment you experienced and thank you for your feedback as is helps us to improve the guest experience.

Report response as inappropriateThank you. We appreciate your input.
This response is the subjective opinion of the management representative and not of TripAdvisor LLC.
monmouthstud56
Chicago, Illinois
4370
Reviewed January 27, 2018
Great Hotel, Definitely Worth Booking

I've stayed at this hotel a few times for business and pleasure. Over the years I've stayed at numerous luxury hotels and this Four Season hits the mark. From the staff opening doors for you, to the thoughtful suggestions on where to dine, this place does it. FYI this hotel is INSIDE Mandalay Bay.

Pool - Fantastic! During the summer when it's super hot out, the pool is kept colder which is nice. It's always easy to get a server to get you food and beverage. Not crazy busy and easy to get chairs. Not necessary to get a cabana as we find with other parts of Mandalay Bay.

Food - Breakfast is good, but just a note it can get pricey. Two of us it was $90 with tip (one buffet and one ordering off the menu). There is also a steakhouse in the hotel which is awesome!

The plus side is that it's quiet but inside Mandalay Bay. If you're looking for the Vegas fun, just walk right into Mandalay Bay.

This review is the subjective opinion of a TripAdvisor member and not of TripAdvisor LLC.
fingold
Los Angeles, California
168
Reviewed January 26, 2018
Disappointing service. Fine hotel.

The hotel has a separate entrance to the Mandalay Bay. It's a welcome respite from the clang of slot machines.

Upon checking in, I was told that one of my two rooms was ready. I was told by the front desk agent that I was entitled to an upgraded room through the Amex FHR program, but unfortunately the room category above did not have a connecting room, but the category above that did, if my kids would share a king bed. We asked the kids if they were open to that and they agreed. This is where I was immensely offended. The agent asked for $200 extra plus tax and fees for this upgrade. While I understand Four Seasons has a program to offer paid upgrades, I was led on and duped to bring my kids into it. This was not what I expect from a luxury property. Had the agent said nothing about an upgrade I would have known none the wiser. This interaction clearly ruined my stay.

The 2BR suite that I paid for was fine. It was a little expensive for what you get, but that was a busy night in Vegas. The room was clean and tidy.

Prior to arrival, I had emailed reservations to make sure they had my preference of no feathers in either the pillows or comforter. A minor request, but I was assured it would be taken care of. The pillows ended up being foam. I had a poor night sleep. When I woke, I checked the comforter and discovered it had feathers.

I had 2 room service orders. One was correct and the second was not. I called to get it corrected, after all mistakes happen, and they said they'd correct it in 15 minutes. Needless to say, 30 minutes later I left the room with no fix. When I came back several hours later, the food had been delivered, but what was the point?

Upon checkout, the front desk agent asked about my stay. I said I had a couple of issues and I'd like to discuss them with the front desk manager. He was busy with another guest, which happens. I asked the manager to call on my cell. I never heard from anyone at the hotel.

While nitpicky, these are the little things that should be sorted out when staying at a property of this caliber.

Review collected in partnership with Four Seasons
This business uses tools provided by Tripadvisor (or one of its official Review Collection Partners) to encourage and collect guest reviews, including this one.
Ask fingold about Four Seasons Hotel Las Vegas
3  Thank fingold

Thank you for taking the time to write such a thorough review of your recent experience. We value guest feedback - positive and negative - as it helps us to improve the guest experience. As indicated in our private message to you, our director of rooms, Austin Price, would like to speak with you directly to address your concerns. Austin welcomes the opportunity to connect with you and looks forward to hearing from you soon.

Report response as inappropriateThank you. We appreciate your input.
This response is the subjective opinion of the management representative and not of TripAdvisor LLC.
View more reviews
PreviousNext
1…164165166…898