$109
$101
View deal
Hampton$109
Hotels.com$109
Priceline$109
View all 19 deals
Prices are the average nightly price provided by our partners and may not include all taxes and fees. Taxes and fees that are shown are estimates only. Please see our partners for more details.
Deanna V
Muskegon, Michigan
114

One of the best for cooperate Travel, very nice and well maintained. Staff is very helpful and friendly!
Front desk clerk amazing! (Bonnie).
Would recommend, it was very quiet and spaceous.
I will definitely be back!

Trip type: Traveled on business
See all 390 reviews
Nearby Hotels 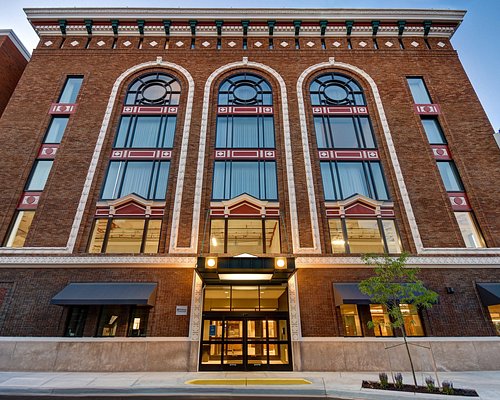 We were surprised we did not hear the airport traffic. Pool was warm and clean. Staff was friendly. The beds were comfortable and the bathroom was roomy. Seemed quite modern and up to date. Five minute drive from the Air Zoo

Review collected in partnership with Hampton
This business uses tools provided by Tripadvisor (or one of its official Review Collection Partners) to encourage and collect guest reviews, including this one.
Ask Farmgirl54 about Hampton Inn Kalamazoo
Thank Farmgirl54

This review is the subjective opinion of a Tripadvisor member and not of TripAdvisor LLC.
bobbyes766
Midland, Michigan
1
Reviewed April 8, 2017
Room spacious - maintenance not so great

Room was nice & spacious but had a constant whirling sound from an outside fan that no staff told me they couldn't fix until I checked out. I Asked for a different desk lamp-mine was broke- And didn't get it because the staff member didn't tell maintenance.

Review collected in partnership with Hampton
This business uses tools provided by Tripadvisor (or one of its official Review Collection Partners) to encourage and collect guest reviews, including this one.
Ask bobbyes766 about Hampton Inn Kalamazoo
Thank bobbyes766

Thank you for your feedback, we truly appreciate when our guests let us know about their experiences. We will definitely address the maintenance, front desk communication. I am glad that you liked our room and enjoyed it. I apologize that we weren't able to solve your issue.

Report response as inappropriateThank you. We appreciate your input.
This response is the subjective opinion of the management representative and not of TripAdvisor LLC.
BrigitteR90
3
Reviewed April 3, 2017
Kalamazoo Hampton Inn Stay

I would highly recommend this hotel. Very clean, tastefully decorated, staff was very friendly & helpful, breakfast bar was amazing & WiFi actually worked great!! The room was very clean & tidy as well as the pool was clean, warm & lots of pool towels on every table & all the chairs!

Review collected in partnership with Hampton
This business uses tools provided by Tripadvisor (or one of its official Review Collection Partners) to encourage and collect guest reviews, including this one.
Ask BrigitteR90 about Hampton Inn Kalamazoo
Thank BrigitteR90

We are very happy that we were able to make your stay at the Hampton an awesome and above average experience. We love when our guests are happy with the Hampton Inn. We hope to see you again!!!

Report response as inappropriateThank you. We appreciate your input.
This response is the subjective opinion of the management representative and not of TripAdvisor LLC.
599KarlM
Deer Park, Illinois
4215
Reviewed March 27, 2017
Clean, Quite, and Late Checkout Allowed

Staff was great. They allowed a late checkout so that I could shower after my bike race. Morning breakfast was great and hotel was quiet on the 4th floor. I would definitely use this hotel again. Another plus is the close access to the airport and the air museum.

Review collected in partnership with Hampton
This business uses tools provided by Tripadvisor (or one of its official Review Collection Partners) to encourage and collect guest reviews, including this one.
Ask 599KarlM about Hampton Inn Kalamazoo
Thank 599KarlM

This review is the subjective opinion of a Tripadvisor member and not of TripAdvisor LLC.
trvlbug72
Hamilton, Canada
9372
Reviewed March 26, 2017
Manager completely unresponsive to unsafe situation

I hate to post this actually – I have tried hard to resolve this professionally and not take it “public” so to speak. I always given any establishment, hotel or otherwise, a chance to remedy a situation before posting. You will see in a few other posts a reference to having a problem and the hotel addressed it, with no specifics because I believe how it is addressed is usually much more important than what they were addressing. Nearly 3 months have gone by since our stay and the manager, Roberto Ramon, continues to be wholly unresponsive to me so I am now posting my review.

Our stay at the Hampton Inn Kalamazoo was average. Room was comfortable, breakfast was reasonable and the rate was good. The real problem was that my son made the mistake of using the men’s bathroom in the lobby while I was checking in. The metal door plate was not affixed properly to the door and the corner was very sharp. It tore his jacket as the door swung shut as he was going through the door. He showed me the tear and the door right away and I was surprised that a door plate could be sharp enough to tear a coat, but it was incredibly sharp, even though it was not a very large gap between the door and the plate. If it had been warm weather, it could have been his skin that was sliced open. I reported it to the front desk staff immediately and the woman at the desk, Katie, apologized and called maintenance right away. I returned to the door to take pictures. Both Katie and the maintenance staff came quickly to the area. The gentleman from maintenance had a screw driver and after they checked it, and acknowledged the gap, he immediately tightened the plate while my son and I watched. We then returned to the front desk where Katie gave us a piece of tape to try to help keep the down from coming out of the hole in my son’s coat. She said she would speak to the manager and to stop by the front desk at check out to see what would be done.

The next morning, I watched as the front desk staff wrote my home phone number, cell phone number and email on a copy of my folio and left it for the manager. He never called – to this day, nearly 3 months later he has never called. I have called him multiple times if I get lucky enough to catch him in the building, he will talk to me. The first time was nearly a week after our stay and other than saying he had no idea how to get a hold of me, but he knew I would call back if it was important, he was nice. He said that what I told him was exactly what his staff told him has taken place. I offered to send him my photos of the door before the repair and he said it wasn’t necessary, not to worry, that they would replace the coat, he just needed to file the paperwork with the insurance company. He asked me to email him my receipt for the new coat and I did. (The coat that was damaged was less than 1 month old.) On February 3, I received this email from Roberto:

“Hello Frances. I have an update for your son's coat that he had torn at our hotel. We have looked into the situation and have decided that we are not responsible for the tear in the coat. After sending in pictures and reviewing the situation the panel on the door was in an adequate place and is determined as an accident by the guest.
Respectfully,
Roberto Ramon
Assistant General Manager
Hampton Inn
Kalamazoo, Michigan”

I emailed him back and expressed my displeasure and was also curious as to what photos he had sent in since I was the only person who took pictures before the plate was tightened and he had told me not to send my photos. After no reply I contacted Hilton customer service and complained. This was part of the response that I got:
“Regarding your concern, the hotel has advised us that upon receiving this concern, they communicated this to their maintenance team and who advised that the door panel was already fastened tightly prior the incident. In line with this, they have also advised that as it was properly screwed prior the incident, they will not be responsible for purchasing clothes.”

I responded that this was not true, that my son and I watched the maintenance staff tighten the panel with a screwdriver and sent Hilton my photos showing the obvious gap between the door and the panel. They responded that they had referred this back to the hotel manager to be addressed directly with me and that I would be contacted by the hotel…still never happened.

Long story short, there is still no resolution to this situation. I have not been reimbursed for the new coat, which was identical except for the colour (the original colour was no longer available) to the original coat which was only weeks old when it was torn. Hilton says they can’t intervene at the local level and Roberto refuses to return my phone calls or my emails. As I said at the top, the stay itself was fine, but I think guests should be aware that the manager is not responsive in any way – if you run into any sort of a problem with your stay, you may encounter the same assistance from him that I have, which is none, despite his insistence that we would get this resolved. I have not accepted a return of my room rate as the rate was less the cost of the coat. My son arrived with a new coat with no holes in it. With well more than 100 hotel stays in his short life, this is the only time that he has left with a hole in his coat. It therefore seems reasonable that he could stay at this hotel and not leave with a hole in his coat.

This review is the subjective opinion of a Tripadvisor member and not of TripAdvisor LLC.
View more reviews
PreviousNext
1…353637…