$209
$187
View deal
Expedia.com$195
Hotels.com$195
Trip.com$209
View all 17 deals
Prices are the average nightly price provided by our partners and may not include all taxes and fees. Taxes and fees that are shown are estimates only. Please see our partners for more details.
Atharva R
Calgary, Canada
1

Excellent hotel to stay at!

Located in an excellent area, the InterContinental Chicago Magnificent Mile hotel provides an excellent breakfast, with amazing, spacious rooms. However, the staff are truly what make this hotel stand out! Our hostess, Dinka, made us enjoy our stay even more through her friendly and helpful attitude at breakfast.More

We are so pleased that you enjoyed the location and our spacious accommodations. Thank you, thank you, thank you for letting us know that Dinka made your stay more memorable by providing friendly and helpful service. Your comments have been passed along to all her superiors and will be shared with her. We hope you come back for more of the same and consider us your "home away from home" when your travels bring you back to Chicago.

Report response as inappropriateThank you. We appreciate your input.
This response is the subjective opinion of the management representative and not of TripAdvisor LLC.
See all 6,268 reviews
Nearby Hotels 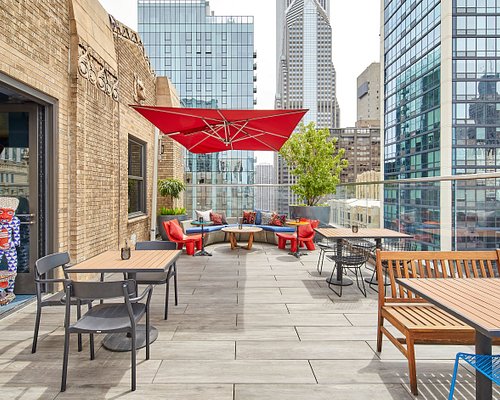 We are having a fabulous stay here in Chicago while attending Star Wars Celebration. The concierge Lucas has been above and beyond helpful. The bed is super soft and comfy for my husband and son unfortunately for me my back doesn’t like soft beds so I have been unhappy. Not the fault of the hotel but just bad luck for me. Super clean and friendly staff.

Review collected in partnership with this hotel
This business uses tools provided by Tripadvisor (or one of its official Review Collection Partners) to encourage and collect guest reviews, including this one.
Ask Liesl D about InterContinental Chicago Magnificent Mile
Thank Liesl D

We're so glad that you enjoyed your recent stay while attending the Star Wars Celebration. We will pass your comments along to Lucasz. He takes pride in the service he provides to our guests and makes us proud. Although our beds are soft, we hope you were still able to get some rest. We hope you come back and see us again the next time your travels bring you to Chicago and "May the Force be with you"!

Report response as inappropriateThank you. We appreciate your input.
This response is the subjective opinion of the management representative and not of TripAdvisor LLC.
ConventionLady
Maryland
10636
Reviewed April 12, 2019
Lumpy pillows but overall a great stay.

The ideal location of IH is super convenient for walking and exploring the North River area, and hopping on transit to other areas of the city. The hotel itself, while apparently recently renovated, has very small cramped rooms. In an attempt to provide closet space the closet doors open up against the front door. A chair was cramped into a corner of the room and if moved to get a view of the TV it barely fit between the window and the bed. If you were using the desk chair there was no space for anyone to walk behind it. The bed was comfortable but the pillows lumpy.

I can’t say enough good things about the doormen at IH. They were super helpful in helping us unload and reload luggage, and went out of their way to help us find our UBER drivers for our outings. I hope people take notice of this when you stay at IH and reward them kindly.

One conversation piece our group had was “who picked out the carpet for the hallways?” We discovered that the “South Tower” which was completed in 1929 was originally the home of the Medinah Athletic Club and was commissioned by the Shriners Organization. During restoration of the hotel two carvings of lions were discovered underneath many layers of paint in the marble walls. These have become an emblem used throughout the hotel.

Thus, the carpet was meant to look like lion’s paws. What “we” saw when we stepped off the elevator into the hallway was a badly worn old carpet. Until you actually feel the nap and adjust to the paw prints it is a decorator’s nightmare. This is one girl’s opinion however, you will have to judge for yourself. Photo attached.

The pool was under construction. It will be fantastic to see the newly renovated pool when it opens in a few weeks.

Overall, it was a great hotel with friendly staff, clean rooms and a superior location. I would recommend it and will stay there again.

This review is the subjective opinion of a Tripadvisor member and not of TripAdvisor LLC.
Cheryl Y
United States
11164
Reviewed April 11, 2019
Excellence!

I spent two nights at the Intercontinental Hotel on the Magnificent Mile and it was a perfect experience! Comfort, quality friendly staff who really care about the experience their customers have, accommodating, helpful, and just great. I have absolutely not one single complaint. Thoroughly enjoyable stay.

This review is the subjective opinion of a Tripadvisor member and not of TripAdvisor LLC.
Resort06933571633
Elk Grove, California
614
Reviewed April 10, 2019
Intercontinental

Service was mid-West friendly, courteous and professional. Rooms were spacious and clean with decent toiletries and a well stocked minibar. Room service was on the spot and tasty. Wonderful restaurants nearby and Michael Jordan's Steakhouse in the hotel. Convenient and comfortable. I'll be back.

Review collected in partnership with this hotel
This business uses tools provided by Tripadvisor (or one of its official Review Collection Partners) to encourage and collect guest reviews, including this one.
Ask Resort06933571633 about InterContinental Chicago Magnificent Mile
2  Thank Resort06933571633

This review is the subjective opinion of a Tripadvisor member and not of TripAdvisor LLC.
timdU3448ZJ
Shannon, United States
21
Reviewed April 9, 2019
Overnight Stay

A great historic building with all the modern amenities. The staff was very friendly and the room was top notch. A very nice hotel and I wish we could have stayed longer to experience more of what it has to offer.

Review collected in partnership with this hotel
This business uses tools provided by Tripadvisor (or one of its official Review Collection Partners) to encourage and collect guest reviews, including this one.
Ask timdU3448ZJ about InterContinental Chicago Magnificent Mile
Thank timdU3448ZJ

This review is the subjective opinion of a Tripadvisor member and not of TripAdvisor LLC.
View more reviews
PreviousNext
1…116117118…