$191
$179
View deal
Free cancellation until 10/08/21
Priceline$179
Hotels.com$179
travelup.com$191
View all 22 deals
Prices are the average nightly price provided by our partners and may not include all taxes and fees. Taxes and fees that are shown are estimates only. Please see our partners for more details.
Mark B
Sebring, Florida
2523

I strongly recommend staying at the Hyatt if you are flying out of Orlando it was great and the people are fantastic.. they help with everything to get you out on your flight on time. from picking up your bags to getting you to security on timeMore

Thank you for your recommendation! It is always nice to hear positive and appreciative feedbacks from guest who recognize our World Class Service provided by our staff at Hyatt. Your kind comments regarding our staff's assistance with getting you to security on time were forwarded to the Executive management team at the hotel and we are looking forward to welcoming you again in the near future.

Report response as inappropriateThank you. We appreciate your input.
This response is the subjective opinion of the management representative and not of TripAdvisor LLC.
See all 6,368 reviews
Nearby Hotels 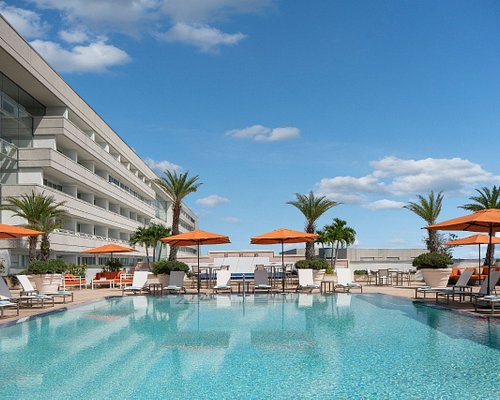 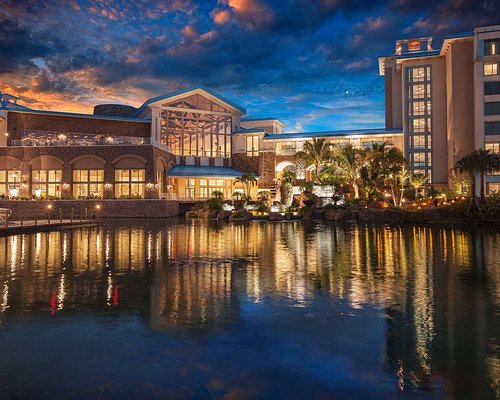 An unexpected night, but with the view from the balcony, the sushi (best I've had), the chowder(also the best I've had)and the night of fun chatting to the staff and being served great cocktails, we wish we'd stayed for longer. Well done everyone, a great bunch of people from reception to check out!

Thanks for the great comments about your recent experience at Hyatt Regency Orlando International Airport. We are glad to hear you enjoyed the Hiro's sushi, our Signature Crawfish Chowder and cocktails in Lobby Bar. We wish you will be back again soon.

Report response as inappropriateThank you. We appreciate your input.
This response is the subjective opinion of the management representative and not of TripAdvisor LLC.
annieliz32
East Sussex
1419
Reviewed June 26, 2014
Ideal Location

We stayed here for one night to catch an early flight the next morning and found the hotel to be extremely comfortable. The room was great and very clean and had everything we needed and quite spacious. The bathroom was large and the shower was really good, loads of hot water and very powerful, quite unusual for a hotel room! We had a good nights sleep thanks to the comfortable bed but were awakened around 4am with noise from the airport - cleaning we think - but thankfully that didn't last long.

We didn't use the facilities here but did have a look round and it all seemed really good. Check-in/out was easy and quick with no problems or delays. The few staff we spoke to were very friendly.

If you need a hotel for a night prior to an early flight then this is the place to stay - definitely recommended.

This review is the subjective opinion of a Tripadvisor member and not of TripAdvisor LLC.
Betsy M
Tucson, Arizona
403186
Reviewed June 25, 2014
WOW but short Experience

I stayed here one night for business - primarily due to an early flight out the next morning and would absolutely stay again.

Service - front desk was welcoming, professional and very nice. Got me checked in quickly and efficiently.

Room - REALLY exceptional. I was given room 9011 which faced out to the tarmac with a balcony (pretty cool) and I enjoyed watching planes take off. I could not hear a thing with the door closed! You can easily see why Hyatt has such a wonderful reputation by the rooms. The decor was lovely, the bathroom very spacious with extra incidentals (toothpaste) which was nice. Linens and towels were very nice quality as well as the bed being VERY comfortable. I loved the Starbucks in the room, it is not often you can make a decent cup of coffee in the room but you can here.

While my stay was less than 12 hours, I was truly impressed!

Thank you for having stayed with us even if it was for a little while. I am glad to learn that even in that short amount of time, you had a fantastic visit from the rooms to the service by the staff! I hope you will get to stay with us again the next time you find yourself in Orlando.

Report response as inappropriateThank you. We appreciate your input.
This response is the subjective opinion of the management representative and not of TripAdvisor LLC.
Kerriecherry
Winter Haven, Florida
11545
Reviewed June 24, 2014
Thank you!

A big thank you for the Hyatt staff for your wonderful hospitality. Our stay for the night to get to our next morning flight was nice. The rooms were clean, and all staff was wonderful.
-- have to share this experience. My husband and I arrived at 2:30 pm at the limo drop off area. We were greeted promptly by the bell hop. Then we
Proceeded to the fourth floor for
Check in. Pleasant and fast check in. Thank you. We went to our room to find out our key was not working. As we were walking down the hall a maintenance guy seems us walking back down....He went above and beyond.... He was helping housekeeping for some reason, well he came
To try to let us in and it was not working. So he went into a room and called down stairs to
Notify front desk. In the mean time he was checking to see if it was our room :-) well it was so
He let us in with a master key... He told us he will take care of it. He went down stairs and got us new working keys.... Thank you to that hotel staff. ( only of he knew how much it ment to me due to I was day 10 after my abdominal surgery)
--- another 5 is the Hyatt restaurant. Wonderful food.
Awesome Cuban sandwich, with an app of spring rolls.

Thank you for a great service

Thank you for staying with us and for your kind words! I am happy that despite the concern with the keys, you really enjoyed your stay. I am glad that we made your stay comfortable in light of the recent surgery you had just had. I really do hope that you return to stay with us again to enjoy the rooms, service and amazing food.

Report response as inappropriateThank you. We appreciate your input.
This response is the subjective opinion of the management representative and not of TripAdvisor LLC.
junemagpie
us
336113
Reviewed June 22, 2014
Minor Inconvenience

We arrived at the hotel late in the evening tired and ready to go to bed. This is a large property so the trek to the room was considerable after a long day and toting luggage. When we went into the room I noticed that the towel by the sink seemed to be folded oddly - when I investigated further I noticed that the soap and toothpaste were both open and that the towel had actually been used and left on the counter top. Looking further we found a can of sunscreen spray and it was apparent that someone had been lying on top of the coverlet on the bed. I immediately called the desk to report the problem. It took approximately 15 minutes for the manager (?) to come up and move us to the room next door. That room was missing the pot for the in-room coffee maker which was disappointing as I had planned on having a cup of tea. We went to bed and approximately 30 minutes later heard a knock on the door. It was room service bringing a tray of fruit (and awful cookies - chocolate with some type of green chips - mint - better suited to kids). This was a thoughtful gesture but, I would have preferred that they just take that amount off the bill for your inconvenience. Otherwise, the room was clean, nice linens, towels and toiletries. Also, very quiet. which is always a concern for me. Obviously you can't beat the convenience for catching an early morning flight. We only stayed overnight but, there are plenty of shops and restaurants in the airport that are convenient if you are staying longer.

This review is the subjective opinion of a Tripadvisor member and not of TripAdvisor LLC.
View more reviews
PreviousNext
1…793794795…