$279
$251
View deal
Free cancellation until 01/24/22
Trip.com$261
FindHotel$279
ZenHotels.com$254
View all 14 deals
Prices are the average nightly price provided by our partners and may not include all taxes and fees. Taxes and fees that are shown are estimates only. Please see our partners for more details.
wycanone
Florida
12969

This was a great Disney experience from the minute we pulled up to check in, to when we drove away.
I was greeted as soon as I stepped into the lobby by a cast member, led to a terminal where I was checked in. Found a clean room with a great view, dropped our luggage, and were whisked by bus to the parks.
The room was spacious, immaculate,and with the typical Disney touches (the Mickey shape our of towels on the bed was cute!).
The new magic band system worked wonderfully, serving as park admission, fast pass and room key. It was nice not having to fumble around for a room key card after a long day in the park. It also worked at the hotel restaurant and bar.More

Show less
Room tip: With the magic band system, they have a much better handle on when rooms are vacated, and get rooms cleaned and ready for check in earlier. While "official" check in is 3pm, we were able to get a ready room at 11:30 am.
See all 6,484 reviews
Nearby Hotels 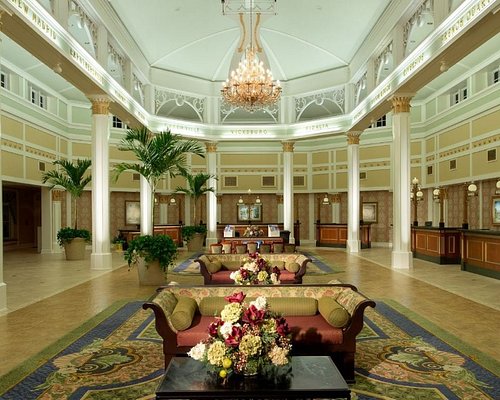 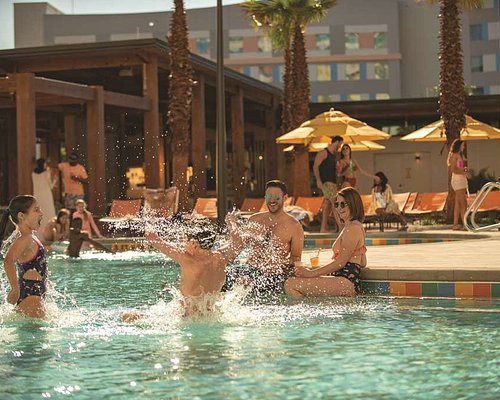 When I stayed there,instead of a restaurant it had a food court. It had wonderful hot cocoa! The rooms were very comfy. My only problem was that the rooms were very small. I was 7 at the time. Next time I need a bigger room!

This review is the subjective opinion of a Tripadvisor member and not of TripAdvisor LLC.
CBJP13
Dieppe, Canada
3219
Reviewed June 29, 2014
Loved this Disney Resort!

We were so happy we chose this resort! The service was great. Upon arrival, we were greeted outside of the lobby and brought into the lobby to check in as I had done the online check-in which was really quick. We were in building 2 which was a great location close to the lobby and pool. This resort is smaller than other Disney resorts which we enjoyed. The rooms are really nice and clean and the grounds are beautiful and very well kept. There is just one pool and we found it was sometimes hard to find chairs that were available but overall ok. The food court was good and we enjoyed that it was open late so we could refill our resort mugs once we got back from the parks. One of the best things about this resort is the boat going to Downtown Disney. It is such a nice enjoyable drive and there is one every 15 minutes so very convenient. The bell staff is really great as well. We needed a cab to go to Universal one day and also to go to one of the Disney golf course and this was very quick. We have only stayed at one other Disney resort but we preferred this one. We would definitely stay here again!

This review is the subjective opinion of a Tripadvisor member and not of TripAdvisor LLC.
williamr475
83
Reviewed June 29, 2014
A great place to stay for the price

What a great place to stay at. The rooms are very big with nice size beds. There is a lovely swimming pool with a cool slide if you want to have fun but if you want to relax a bit there is a lovely big spa bath thing which was nice. There was busses going to the different parks and boats going to downtown disney which was nice. There is a whole different range of foods to choice from and it is just the most perfect hotel for a family going to disney

This review is the subjective opinion of a Tripadvisor member and not of TripAdvisor LLC.
klassact
Charlotte, North Carolina
3236
Reviewed June 29, 2014
Good for the purpose of the visit

French Quarter's is a nice looking place with friendly staff members. From check-in to checking out everyone was very pleasant and helpful. Being that this is on Disney property the thought process is that you wouldn't be in your room too much since you are on vacation going to all the sites. So be forewarned that the rooms aren't' the biggest. It can get a little crowded when there are 4 people in the room. I'm not the biggest fan of room doors being on the outside (wish our travel agent would've mentioned that, but I know they are sticking with the theme of the resort.) The kids played in the pool which was fine and they have a nice bar as well. We never ventured to riverside, but I did hear someone speak about the pool being nicer there. The food at French Quarter wasn't bad at all. There was a couple of times that housekeeping was cleaning our room when we got back which wasn't the best timing since we were tired. The housekeeper was so nice and apologetic I started to feel bad because she was doing a great job of making sure she wasn't in the way. We rode the boat to Downtown Disney which was good as well. I think French Quarter is a nice resort for the purpose of our trip. We didn't spend a lot of time there since we were at parks everyday. It is quiet and relaxing, but a part of me wish their was a little more to it. I would stay here again, but I'd also look at other places as well.
Quick tip for parents: Please pack your patience along with your clothes. Your kids will irritate you trust me at times, but plan to not make plans. The more you make plans the angrier you will get if your plans do not come through. Enjoy

This review is the subjective opinion of a Tripadvisor member and not of TripAdvisor LLC.
professorAlf
Chicago, Illinois
2247
Reviewed June 28, 2014
Mixed Feelings

I have extremely mixed feelings about the Port Orleans French Quarter. We had great experiences with check-in and check-out, but everything in between was just average.

We arrived on the morning of June 20th, several hours before the hotel's official check-in time. I signed up to receive text message notifications, and while we were aboard Disney's Magical Express en route to the hotel, we received a text message notification that our room was ready. Upon arrival at the hotel, we were greeted by Arneil, the doorman, who immediately made us feel like we were old friends. (And by the end of the week, I really felt like we were!)

We had already checked in online, so the check-in process at the hotel was a piece of cake. We received a corner room, as requested, with a very nice view of the river. The room was a good size for two people, and the king sized bed was comfortable. However, the toilet paper was the absolute worst! It was the flimsy, scratchy stuff that you can buy in thousand-sheet rolls at the discount store. It would be nice for the hotel to spend a few cents more for the comfort of the guests. Also, there was shampoo & conditioner but no body lotion. There is no closet, but rather a long bar hanging next to the sinks. This bar wasn't high enough to hang many of my clothes; my maxi dresses were all dragging on the floor. The dresser was nice, though, and there was a working mini fridge, which is always a plus.

On our first night, I woke up in a panic because I'd heard a loud noise. My husband had flushed the toilet! It sounded like a 747 taking off. We soon discovered that the walls were paper thin, and we could hear *everything* that happened in the next room: not just the toilet flushing, but tinkling sounds when the neighbors were using the toilet. Not exactly what one wants to hear at 2am.

Housekeeping was ok, but I noticed that they never dusted or cleaned the mirrors. Also, oddly, they did not take their tips unless I explicitly left a note that said "Tip for Housekeeping." The grounds were mostly clean, although there was one morning where we had to step over urine on the sidewalk on our way to breakfast. (It was cleaned up by the time we returned in the afternoon.) I also noticed the same small bits of trash on the grounds day after day. I'm surprised, given Disney's reputation for cleanliness, that no one picked up this one piece of trash all week. I was so sick of looking at it that I almost picked it up myself.

The pool area was well-kept and clean, however. It was a decent pool for kids, with one water slide. The spa tub was oddly located under a bunch of trees, so we had to scoop out branches and leaves every night before using the tub. But once we were in it, WOW! Just what my sore legs needed after 12 hours of walking through the parks.

We stayed for 7 days/6 nights, and other than seeing Arneil every day (who always made us smile!), we had very little interaction with any of the hotel staff. The people we did interact with on a daily basis were the staff of the quick service restaurant, and are they ever an unpleasant bunch! The first night we were there, a cook gave my husband the stinkeye because he brought his bacon cheeseburger back (they had not put any lettuce or onion on it). And the cashiers were equally unpleasant. The only person working in the restaurant who made us feel welcome was Santos. He went out of his way to talk to us every day, and he remembered we were from Chicago. Seeing Santos, like Arneil, made our stay a bit better. Everyone else in the restaurant acted like they didn't particularly want to be there. (P.S. Santos - congratulations on the birth of your baby girl right after we left the property!)

Most of the positives from our experience were true of all Walt Disney World resort properties: Disney's Magical Express transportation to & from the airport, free transportation to all WDW parks, and express check-out. They even printed our boarding passes and checked our luggage for us so we didn't have to do it at the airport. All of these were great, but they are not exclusive to Port Orleans French Quarter. For that reason, if I were to come back to WDW, I think I'd try another one of their hotels rather than staying here again. If we do come back to POFQ, it will be because of Arneil and Santos.

This review is the subjective opinion of a Tripadvisor member and not of TripAdvisor LLC.
View more reviews
PreviousNext
1…525526527…