GSW is the only place I will go on Vacation. I work all year and every spring my family and I spend a week or two at Grand Shores. I would never think of staying anywhere else. We like to relax and enjoy the time finally get to spend with each other. Everyone says it is not the ritz well you are right it is ten times better. All of the wonderful staff and friends we have met over the years is due to the atmosphere at GSW. I can tell you there is no better place to enjoy the weather than GSW from the nightly grilling sessions to the quiet beautiful beach. We are there during spring break each year and you would never know it in this quaint low key resort. Thank you Bobby!More

Show less
Room tip: Ask for the corner large one bedroom or a townhouse veiw of the pool and the Gulf
See all 166 reviews
Nearby Hotels 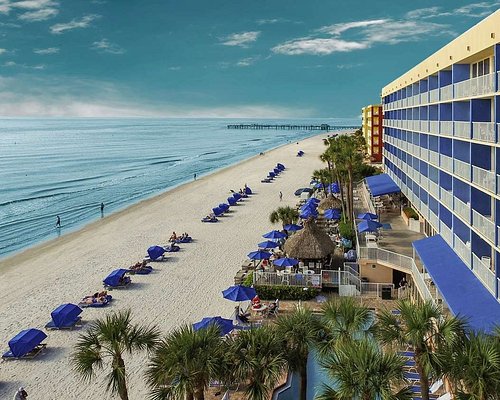 As I write this review for Trip Advisor on Feb 9, 2012, we are two months away from our third stay at GSW.
Our first stay was in 2004. Wife, kids, sister-in-law and I hopped in the van and drove 24hrs straight from Toronto. When we got here we were not disappointed. 2nd floor overlooking the pool and ocean was great. For a family on a budget, $600 for a week in sunny hot Florida was a godsend. No, its not the Hilton, but I did not expect it to be. I'm also not paying $200/night!
In 2011, came back with ALL of the Out-Laws. Again, had a terrific time for the money...even with the Out-laws(they're Scottish). Clean, comfortable, great pool and hot tub area and other guests and the staff were great!
One of the staff happily took us out on the "cat" sailboat free of charge...tipped him a 10-spot and all were happy! Dont listen to the other whiners...the staff are great!!
Many thanks to Patty Dellane who always seems to find us a room. This year in 2012 we are staying in one of the efficiencies with the Murphy bed. Im sure it will be a bit tight, but so what? We're paying $395 for the week!!!
Still cant figure out why its so inexpensive! Stayed at many other places that were good but very expensive. Even motels not on the beach on the other side of Gulf Blvd are twice as expensive!
If you have a young family and on a budget, this is the place to stay.
If I ever buy a timeshare, this is where I'll buy.
Thanks Grand Shores West, see you soon!!!

This review is the subjective opinion of a TripAdvisor member and not of TripAdvisor LLC.
Sonnenblume2011
Zurich, Switzerland
412
Reviewed January 26, 2012
A home away from home

My parents-in-law have owned the timeshare penthouse unit at GSW for almost 20 years . My first visit was in back in 2004 and we have been back several times. We either jointly stayed at the penthouse or in a one-bedroom pool-facing on the 1st floor. The location of the GSW is unbeatable right on the beach.The sunsets are breathtaking. The GSW is also one of the only low-built places in the neighborhood with a cozy, homy atmosphere

I do agree with people that the rooms are in general need of a makeover. Whereas the penthouse is well maintained and has been renovated and refurbished over the years, most of the smaller units are still in its original stage. That said, the place is always clean and the service staff are doing their upmost to make everyone feel at home and welcome.

Overall, a place that many people, including us, are calling their home away from home. We hope that the building managers are hearing the feedback that has been given and investing the maintenance funds in the right spots.

This review is the subjective opinion of a TripAdvisor member and not of TripAdvisor LLC.
SBBK
Truro, Canada
4247
Reviewed December 2, 2011
OK if you get a good price

Location is wonderful, rooms are small, staff was unfriendly to teenagers. Could definately use some updating in rooms.

This review is the subjective opinion of a TripAdvisor member and not of TripAdvisor LLC.
Mike S
Tampa, Florida
36
Reviewed November 28, 2011
You Get What You Pay For........

Listen people these reviews do not do it justice....If you are going to the beach to stay in the room then do not rent here but if you are going for a beautiful beach and great pool with great views then this is the best bang for your buck period. The entire staff is wonderful and work with what Bobby permits.....there hands are tied !!! Stop bashing and be honest. You will not find a better deal ON THE WATER. Bobby is a smart business man and if he does not want to invest cash into his building than that is his right.

Room tip: room 221 is the best for a family...loved it
Ask Mike S about Grand Shores West
3  Thank Mike S

This review is the subjective opinion of a TripAdvisor member and not of TripAdvisor LLC.
shoreNexplore
Florida
110
Reviewed September 2, 2011
Unacceptable

My in-laws have owned this timeshare for over a decade and gave it to us this week for a last family vacation before out new baby arrives.  Location is nice, our spot is on a corner facing the beach and right near the pool.  That's about the only plus.  The upstairs bed is full sized with a boulder for a mattress, the couch bed downstairs was stained and filthy, the Murphy bed that pulls down in the kitchen has a broken leg so leans when laid on, there were missing vertical blinds, the fridge knob is busted so the cool but not cool enough temp can't be adjusted, there is a hole in the wall of the kitchen where it looks like someone slammed a chair into it, and to top it off, last night during a 20 minute downpour our living room flooded.  They offered no help at all at first, just gave my husband some extra towels.  He had to ASK for a mop and bucket and clean it himself.  I eventually was so pissed at them expecting US to take care of the problem that he went back to bring someone in to look at it.  When I asked how often this happens since surely this isn't the first, I was told not for three or four years - righttttt - this is the first 20 minute heavy rain to flood the unit - this is FLORIDA and it rains heavily off and on all summer!

Anyway, our two year old was with us and and the floor was ridiculously slippery and the carpet was soaked all the way to the kitchen - and all this happened around 7pm when we were just about to go out to a nice family dinner.  The staff was completely unconcerned at first, just said that they'd be back the next morning with a wetvac.  After much pressure they finally "offered" to put us up in another room for the night, which was a substandard suite less satisfying than a Days Inn.  It's now almost noon the next morning and they've pulled up a section of the carpet and are drying it out with a fan.  Really?!?

I talked to two of the timeshare neighbors next door in the midst of everythig and asked one where the money for the yearly maintenance fees is going and she frustratingly joked "right into Bob's pocket!". I'm assuming that's the property owner and quickly learned of all of the neighbors "issues" from this week as well, including no working a/c, more fridge issues, phone/tv broken, etc.  I'm extremely disappointed because what minor things I was willing to overlook were ruined by the uncaring attitudes of the staff.  This all has been unacceptable by normal hotel standards but to OWN a timeshare week for 10+ years and receive this sort of neglect, both personally and towards the care of the property, is ridiculous - and you can bet there will be a formal complaint made and my in-laws asking for compensation of some sort.  Too bad - because this place holds tons of childhood memories for my husband and had real potential for us starting our own.  Now I'm not so sure I'd return, even if gifted the week again.  Bummer.

This review is the subjective opinion of a TripAdvisor member and not of TripAdvisor LLC.
View more reviews
PreviousNext
1…222324…28