$87
$51
View deal
Hotels.com$71
Priceline$71
travelup.com$87
View all 15 deals
Prices are the average nightly price provided by our partners and may not include all taxes and fees. Taxes and fees that are shown are estimates only. Please see our partners for more details.
Katie L
24

Visited in May 2016 for a two week holiday. The hotel was in a great location, had plenty of parking, and was in walking distance of some lovely restaurants, and a short drive to the main theme parks. The room was plenty big enough, with maid service every day, well maintained and very clean. Breakfast was included free for myself and my partner and there was always plenty on offer. All in all an excellent stay!More

Report response as inappropriateThank you. We appreciate your input.
This response is the subjective opinion of the management representative and not of TripAdvisor LLC.
See all 1,283 reviews
Nearby Hotels 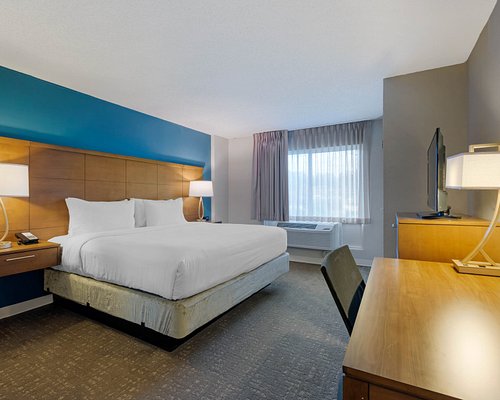 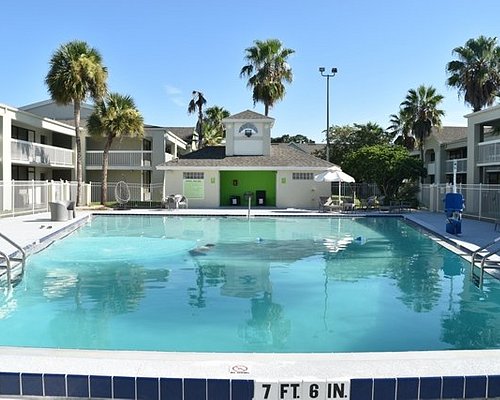 Room was clean and well-maintained. Staff was helpful. Pool area was very nice; the family and I enjoyed it and wifey and I had a poolside libation from the pool's snack/drink bar. Breakfast buffet was good (free for the two us, 4.99 for each kid. If you have more than two kids, pay the $10 resort fee and everyone eats), but a bit crowded; management-maybe extend the time by an hour to handle the crowd. We booked through Hotel.es for $53 as a last minute deal, well worth the price.

Room tip: If you don't like noise, try and get a room that isn't pool side
Ask Chris P about Clarion Suites Kissimmee-Orlando Maingate
4  Thank Chris P

Report response as inappropriateThank you. We appreciate your input.
This response is the subjective opinion of the management representative and not of TripAdvisor LLC.
orate2000
Monterrey, Mexico
812
Reviewed August 8, 2016
Good Price and excellent location for visits to the parks

I stayed here with my wife and 3 kids for 10 days on vacation. We originally wanted to stay in one of the Disney's Hotels but the lower priced hotels were full so we had to search outside of the Disney Property.

The room was pretty large with 2 queen beds and one sofa, the 5 of us were confortable during our stay. It was always kept clean, which is hard to do with 3 small children making a mess all the time. The bathroom was large and nice too.

It is located within walking distance of a grocery store (less than 100 yards) where you can find anything, and also a Subway and a couple of restaurants and pizza places. The Subway was very convenient, closes at 11:00 pm and and we bought dinner there a couple of times after coming back from the parks. For $24 dollars all of us could eat a similar meal that inside the parks would go for $70.

The hotel offers you breakfast that could be free depending on where you booked your reservation, but if it was not included with your reservation, you could still go to the front desk and add it to your room for next to nothing. That was a big saving from having to eat anywhere else in this expensive city. The included breakfast was not great. They have rice, beans, tortillas, eggs, sausage, cereals, milk, bananas, oranges, apples and you can also make Mickey Mouse shaped waffles. The fruit was really good. Actually, everything was really good except for the eggs. I should say that we saw many people eating the scrambled eggs without complain, but none of the 5 of us could eat them, we just didn't like the taste and texture. Breakfast is served from 6:30am to 9 or 9:30am.

It is very close to the Animal kingdom, and they have a shuttle going there at 9:20, arrives within 10 min and from there you can go to any of the Disney parks quickly. They have another shuttle at 7:05 going to another one of the Disney Parks (don't remember if it was Epcot or Magic kingdom) but we never used that one, too early for us. Another bus goes to Universal Studios and Sea World at 9:25am, this one takes about 45min to get to Universal. They also have a shuttle coming back at different schedules depending on the park, but only once did we use the return shuttle, because of the schedule, we used uber, which cost around $10 dollars coming from the Animal Kingdom (uber XL, minivan to accommodate the 5 of us), $18 from the Magic Kingdom and $32 from Universal, about half of what a taxi would cost.

There is a nice pool too, but the kids used it only once because we were at the parks all day and usually came back too late to use it.

In general, the hotel was very good, economical and convenient to our vacation.

Thanks for the comments as for the eggs it is a pasteurized product as per state code.

Report response as inappropriateThank you. We appreciate your input.
This response is the subjective opinion of the management representative and not of TripAdvisor LLC.
geraldgraziose
North Lauderdale, Florida
183
Reviewed August 6, 2016
Quick Trip to Disney

I had ordered a suite with a king bedroom awhile back and I did not want to be on the first floor, nor did I want to face the parking lot to avoid noise, I wanted to face the courtyard. When we arrived we were provided a king suite that was on the first floor, room #103, that was one unit from the parking lot. The room is the ADA fitted room.
The carpet in the room needed to be replaced. There was a tear in the carpet between the night stand and the bathroom wall. It appears to be on the carpet seam. The carpet was also coming apart and separating in the doorway of the bathroom. There was also no Do Not Disturb tag in the room.
The hours of the free breakfast are from 6:30am to 9:30am. They should extend the hours to at least 10:30am if not everyday, at least on the weekends. The crowd at 9am created a lack of tables, plates, and choices of food.
They also need to enforce the pool closing at 11pm. Each night we were there children were in the pool past 11pm and 11:30pm, especially if their parents were at the outside bar.
Thanks,

Room tip: The second and third floors are better to have less noise from people arriving and trying to find their rooms.
Ask geraldgraziose about Clarion Suites Kissimmee-Orlando Maingate
2  Thank geraldgraziose

Thank you for your comments

Report response as inappropriateThank you. We appreciate your input.
This response is the subjective opinion of the management representative and not of TripAdvisor LLC.
Jacqueline P
Hamilton, Canada
1
Reviewed July 31, 2016
Not near Universal, not quality.

The name Maingate is very deceptive this is NOT near Universal or Disney. When I booked my vacation I believed this hotel was near Universal, with a free shuttle. The shuttle only ran once a day to Universal and was to be there at 925 they asked us to be outside(in the heat)ten minutes early. We used the shuttle for three days and every day it was at least twenty minutes late, it made stops at other hotels and we got to the park around 1100, the only return shuttle was at 730pm. We could have paid forty dollars for a cab one way. Initially I only planned to be at Universal for 2 days but the shuttle times made me change my plans. The shuttle was over packed and on several trips people were standing. The air conditioning on the shuttle was not effective. The driver apologised for this and stated that he had complained several times. The name Maingate was very deceptive. The hotel room itself was not clean. The showerhead felt slimy when I tried to adjust it. Water pressure was poor. There were four pillows on the bed and two of the cases were dirty or stained. It was my daughter's 16th Birthday and there was a notice on our reservation that it was her Birthday. No one even bothered to wish her a happy Birthday. I was not expecting much. The pool looked very clean but we did not get to enjoy it as we spent almost two hours each day on the shuttle. Our last day we wanted to use the pool and the gate was locked. The beds were comfortable and breakfast was good but the coffee was awful.

Report response as inappropriateThank you. We appreciate your input.
This response is the subjective opinion of the management representative and not of TripAdvisor LLC.
Kamilah M
3
Reviewed July 26, 2016 via mobile
Fine For the Price

Overall the stay at Clarion was fine. The tub didn't look clean when we got there and even after the housekeepet left it still looked dirty. There was no hot water for the sink faucet and the handle was loose. The bedding was clean and the room was fine but the bathroom had some areas of opportunity. I enjoyed the breakfast overall (the waffles were delicious) and they did have hot selections. My family usually stay in 4 star rooms so it was fine for what it was.

Thank you for your comments

Report response as inappropriateThank you. We appreciate your input.
This response is the subjective opinion of the management representative and not of TripAdvisor LLC.
View more reviews
PreviousNext
1…626364…