$589
$494
View deal
Hotels.com$569
Priceline$555
ZenHotels.com$589
View all 19 deals
Prices are the average nightly price provided by our partners and may not include all taxes and fees. Taxes and fees that are shown are estimates only. Please see our partners for more details.
smccall2016
Collierville, Tennessee
2

My wife and I travel extensively for work and fun (Hilton Lifetime Diamond Members), this was our first visit to Key West and our stay at The Ocean Key Resort was simply spectacular! Mr. Morio has assembled an unbelievable Team who far exceeded our expectations during our 5-day stay.

The property from A-Z is spectacular, and coupled with the Team their, The Ocean Key Resort is a must stay when planning your trip to Key West!

We appreciate your wonderful comments and it was indeed a pleasure to host you during your stay with us! Please come back and visit us on the island very soon.

Report response as inappropriateThank you. We appreciate your input.
This response is the subjective opinion of the management representative and not of TripAdvisor LLC.
See all 3,974 reviews
Nearby Hotels 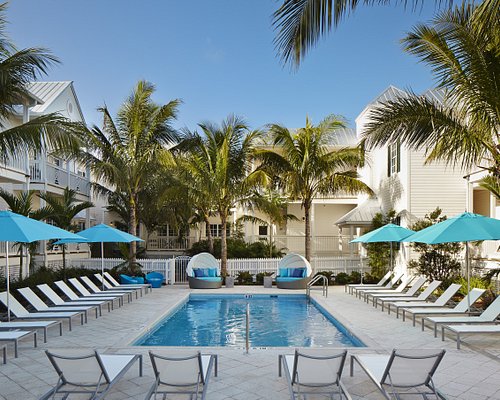 Location is nice, very nicely kept given the age of the property. Pool bar closes at sunset...should be open atleast time 10.00 PM. Staff are friendly. This was our first visit to the Key West! Definitely coming back to the Keys again!

Review collected in partnership with this hotel
This business uses tools provided by Tripadvisor (or one of its official Review Collection Partners) to encourage and collect guest reviews, including this one.
Ask 674rajeevn about Ocean Key Resort & Spa
Thank 674rajeevn

Hello and thank you so much for your review of our resort and for staying with us! We close the Liquid Pool Bar at sunset so that we do not disturb the guests rooms that are in the immediate pool area. Please come back to enjoy more amazing sunset at water views again very soon.

Report response as inappropriateThank you. We appreciate your input.
This response is the subjective opinion of the management representative and not of TripAdvisor LLC.
jatta908
Weehawken, New Jersey
74
Reviewed July 2, 2019
Beautiful place to spend vacation

We had a great time in our oceanfront boutique suite on the third floor. Our view was of Sunset Pier, which suited us for people watching (and the sunset!). We were right above the Hot Tin Roof kitchen, but I didn't even notice that until halfway through our stay, so no problems with noise or anything else that could come with being right above a kitchen! The air conditioning wasn't too loud, and it worked well, which was appreciated with such hot weather during our stay! And the bed. Rare is it that I have a good first night's sleep in a hotel, but I had a great first night through last night of sleep. Perfectly comfortable. I'm not a big fan of feather pillows, but the mattress was so great, I didn't have a problem with the pillows.

Though we didn't use room service, we did eat at the pool and Sunset Pier once each and at Hot Tin Roof for a couple of breakfasts and dinners. We don't typically like to eat at hotel restaurants, but we had such great meals, every time! Good variety for someone who doesn't eat meat or a lot of fish--which can be hard on an island where most of the food is fish-centered. For dinner, we would get salads and small plates and share everything. The corn flake crusted French toast was the last dish I ate there, and I'll be thinking about that for a good long time.

THE POOL was amazing. Staff were so attentive, yet not aggressive in any way whatsoever. We never had a problem getting a seat, and staff were great about clearing towels after people left, which is really a first for me to see at any hotel, ever! The music was enjoyable, especially when live bands were playing over at the pier and were piped in. I could have spent another week at this pool, no question. Was initially disappointed with the size based on pictures, but once on a lounger, I never noticed or cared how big or small it was.

Some people have complained about the cruise ships ruining the view. There were a couple boats docked during our first couple of days, which weren't in the way at all, and on our last day, there were three. We didn't notice until we got to breakfast at HTR and saw a wall of cruise ship when we looked out the window. I could then see why people would be frustrated about that! We didn't mind hearing the boat announcements from our balcony, but I could also see that getting old after a while, too.

The location was perfect for us. We were just on the edge of being in the middle of everything, which we like. Easy access to everything, and in walking distance to every place we wanted to go.

My only wish was that the bill was emailed or slipped under the door ahead of checkout. There were a couple of discrepancies that were fixed right away, but I would have liked more time to look everything over.

Overall, we had a wonderful stay, and I hope we can return some day.

Wow! Thank you so much for your incredible review and for choosing to stay with us while visiting Key West. We certainly appreciate your compliments to our island friendly staff members and will certainly pass that on to them.All of our team members were thrilled to have you and we look forward to welcoming you back to the island in the very near future!

Report response as inappropriateThank you. We appreciate your input.
This response is the subjective opinion of the management representative and not of TripAdvisor LLC.
laughingcake
Wrexham, United Kingdom
4737
Reviewed July 2, 2019
Rude staff

We checked in, to find feather pillows, housekeeping were in the adjacent room so we asked for them to be exchanged, we then found the bedding was wet and they explained their policy was to put sheets on damp and allow the ceiling fan to dry them, housekeeping were extremely rude and made us feel very uncomfortable, front desk staff were also rude and when we queried the charging for incidentals as extortionate for 2 rooms despite being one family were patronised and told we were free to leave but without a refund of our prepaid rooms, would never book a noble hotel again, same issues in gory laurderdale with rude staff

Thank you so much for your feedback. We actually do clean and dry all of our linens before making each guest room bed. We also require authorization for incidental charges for every guest and room so that you are able to utilize and charge in the SPA, Food & Beverage outlets, and our Boutique. Our goal is to make sure that you are comfortable so please reach out to our management team if we can be of further assistance during your stay.

Report response as inappropriateThank you. We appreciate your input.
This response is the subjective opinion of the management representative and not of TripAdvisor LLC.
maddichi
Taylor Mill, Kentucky
32
Reviewed June 30, 2019 via mobile
Absolutely best staff & experience

My boyfriend and I recently stayed here and could not stop talking about how friendly and accommodating the staff was out entire stay! The pool has a perfect sunset and beach view without the crowds. You can watch the sailboats come in and out all day. We would have a drink at the pool, watch the sunset, then go grab dinner. This hotel is within walking distance to Duvall, the main marinas, and Mallory Square. We got massages through the spa one afternoon and they were wonderful! We had breakfast room service which they delivered to our porch table to start our day. We even went deep sea fishing one day, brought back our fresh catch to the pool bar, and they made them into fresh fish tacos for our group which were delicious! Three separate, beautiful and wonderful blonde young ladies took care of us at the bar each day, Diana was absolutely wonderful and fun to chat with daily! Another bartender (sad I cannot remember her name) recommended a snorkel tour and booked it all for us! The third took care of us each evening when we could come down to watch the sunset. The bar-back was friendly and hard working each day in that heat changing towels for everyone at the pool. We will definitely be coming back to stay at Ocean Key Resort again!

We are so excited to hear how much you loved your stay at Ocean Key Resort & Spa! It sounds like you took full advantage of the beautiful views and our great location which is so close to everything off of Duval Street. Our team is looking forward to welcoming you back to the island again very soon!

Report response as inappropriateThank you. We appreciate your input.
This response is the subjective opinion of the management representative and not of TripAdvisor LLC.
Dave R
1
Reviewed June 29, 2019
First time stary

Very impressed with the property, service, rooms, pool, everything. This will be our go to resort when we come to the keys. Loved the bar service at the pool, check in was quick and easy. The rooms were very spacious, clean and very great location overlooking Mallory square

Review collected in partnership with this hotel
This business uses tools provided by Tripadvisor (or one of its official Review Collection Partners) to encourage and collect guest reviews, including this one.
Ask Dave R about Ocean Key Resort & Spa
Thank Dave R

Thank you so much for your incredibly kind review and for choosing to stay with us in Key West! We look forward to welcoming you back to paradise again in the very near future.

Report response as inappropriateThank you. We appreciate your input.
This response is the subjective opinion of the management representative and not of TripAdvisor LLC.
View more reviews
PreviousNext
1…107108109…